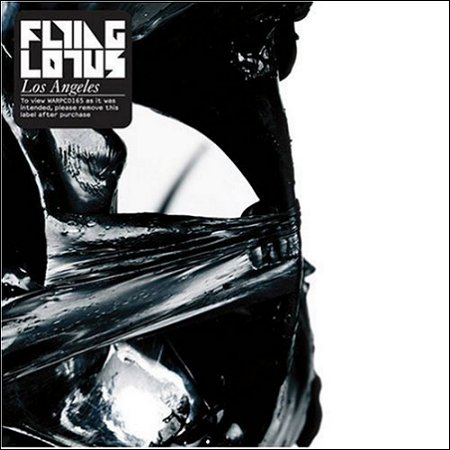 First off, I’m a year late on this: the album came out in June of 2008, before the economy collapsed, before Obama’s election, and before “Imma let you finished” became the overworked meme of the week. It’s not that I slept on the album, per se, it’s that the album seemed sleepy to me. The snippets I heard of “Los Angeles” seemed too nebulous and mellow to warrant the $13.98 it was selling for at Amoeba down the street. Then I heard him do a few remixes I liked, and I saw him mentioned along with Nosaj Thing, whose “Drift” I was mighty impressed with. So I plunked down my hard earned money and bought a copy, fourteen months after it originally came out.

Flying Lotus for those unfamiliar is the stage name of DJ/producer/musician Steven Ellison, who has been wringing beautiful noise out of his laptop for a few years. His output includes his 2006 debut full-length, “1983,” and a bunch of EPs and 12 inches, none of which I’m familiar with. Like Nosaj Thing, Flying Lotus is one of the new breed of producers grounded in both hip hop and electronica. He’s on the same label as Autechre and Aphex Twin, but there is some definite head-nod to his beats.

The “Los Angeles” that the title refers to isn’t the L.A. of sun, skin, boob jobs and tans. Nor is it the L.A. of lowriders, Dickies, and Chuck Taylors. To me it sounds like the L.A. of the future in “Blade Runner,” chaotic, mechanical, and a little sinister. It opens with the throbbing synths of “Brainfeeder” before going into “Breathe. Something/Stellar Star.” The song has a pretty loop which could be a woman’s voice, an organ, or a synthesizer, and backs it with a ticking beat and random electronic pulses.  As with most of the songs on the album, the track balances the beautiful with the dissonant, incorporating pleasant melodies with harsh and jagged sounds. It often sounds like a bunch of unconnected elements crammed together. There is a tension to the songs, as if the whole thing could fall apart at any minute.

At times, I was reminded of Madlib, another SoCal producer who likes to mess with listeners. The clanging drums of “Melt!” could have come off of Madlib’s “The Beatkonducta in India.” However, while Madlib is grounded in obscure soul and jazz records, Flying Lotus tends to work with much more electronic and mechanical sounds, although a sense funk and soul remain. Nowhere is that funk clearer than on “GNG BNG,” one of the few songs here that actually bangs. It starts off civil enough, but gradually devolves into something noisier and noisier, a cavernous beat with Middle-Eastern instruments and what sounds like a motherboard on overdrive. The result is a mashup of organic and mechanical sounds, a sort of cyborg funk. It’s also the best three minutes and thirty-nine seconds on the album.

There isn’t much else on “Los Angeles” that cooks likes “GNG BNG.” Mellow is the name of the game for most of the tracks, which is what scared me away from it in the first place. The truth of the matter is, as an instrumental hip hop album, Flying Lotus isn’t very successful. That’s because it’s only tangentially hip hop; “Los Angeles” is really aiming for the more electronica side of things, bringing an edginess and fresh perspective to the genre. The basic template of most of the tracks on “Los Angeles” seems to be the sort of mellow house that chic clothing stores play to entice you to buy haute couture, or swanky bars use as a soundtrack to fifteen-dollar cocktails. Flying Lotus takes that nondescript genre and messes with it until it is hardly recognizable. On “Beginner’s Falafel” he starts out with what could be your average downtempo song, and then layers on a distorted beat, the hissings of a respirator, and ambient spaceship noises. “Camel” mixes clanging drums, snippets of singing, and washes of synthesizers into a mix that is vaguely Middle-Eastern. “Comet Course” could be Bossa Nova, but it’s chopped up and manipulated beyond recognition. Even in the most chipper uptempo songs, like “Parisian Goldfish,” there is an element that is a little disconcerting and a little off.  There is never a simple beat you can just ride; it’s always a jagged, distorted, and barely hanging together.

Alternately gorgeous and disturbing, melodic and disjointed, warmly analog and coldly electronic, “Los Angeles” isn’t your average electronic music album. It works within diverse and disparate genres and sounds, and the result is something captivating and unique. I may have wanted the album to bang more than it did, but I still enjoyed it, and it’s worth every cent of my hard-earned money. Flying Lotus deserves appreciation both for what he’s already accomplished and for the things he’ll do in the near future. He’s definitely an artist to keep an eye on.