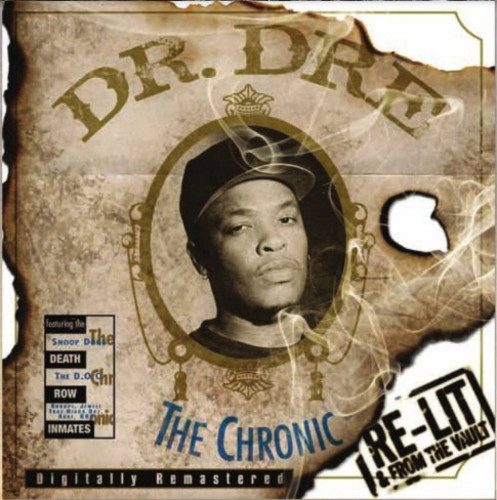 Dr. Dre :: The Chronic: Relit and From the Vault

For most music fans re-issue is simply code for “cash in.” In the case of Death Row Records back catalog of classic, groundbreaking, West Coast hip hop every last drop of cash that former owner Suge Knight could manage to wring out of these songs with a ceaseless cavalcade of compilations, greatest hits, and half ass re-masters was taken. In the history of his musical crimes however Knight’s most egregious (that doesn’t involve extorting artists I guess) is the lousy re-mastering treatment given to Dr. Dre’s “The Chronic” the first time it was re-issued. Reportedly the re-mastering wasn’t even done from the original master tapes, and instead simply half-assed from a digital copy.

Knight’s lazy and misguided running on Death Row over the years however has finally had a silver lining, as Knight recently had to sell his catalog to pay off millions of dollars in debt. New owners WIDEAwake records could have easily just kept these records in print and had a tidy revenue stream for the next few years, the hip hop equivalent of owning a few shares of stock in Coca Cola. Music fans got lucky however. The new owners of “The Chronic” are apparently fans, and they want us to finally hear the record the same way Dre heard it in the studio, with a proper, loving re-master from the original tapes that breathes fresh life into this undisputed musical classic.

To understand the necessity of re-mastering “The Chronic” one must first look at what the album meant for the history of hip hop. Beyond being arguably the first Snoop Dogg album (this record is as much his as “Only Built for Cuban Linx” is Ghostface Killah’s) and featuring one of the most consistent series of guest spots in the history of hip hop, “The Chronic” changed the way hip hop was produced. More so than even Dr. Dre’s previous work with N.W.A, “The Chronic” infused a sense of powerful melody and thunderous funk into hip hop’s previous arsenal of snare hits and keyboard bleats.

Building upon not just the musical but lyrical influence of artists like Rick James, “The Chronic” succeeded in making funk and disco’s misogynistic tendencies almost sexy for ladies, and showed men with enough swagger you could be a dick and a sex symbol. But until this reissue the depth of Dre’s construction has been only previously hinted at. Each individual synth, guitar, or bass hit rings clearer and more musically than ever before. What previously sounded like a simple selection of samples sounds instead like a bastardized version of a live band squeezed into the studio with the expansive number of guest stars and hangers on. Simply put, from a musical perspective this classic album has finally taken the best aspects of the things that previously made it so great, and brought forth a live warmth that makes revisiting the record, even after a decade plus of listening, a true treat.

For those readers not sold off the bat on re-purchasing the record simply for a better sounding copy WIDEAwake has dusted off seven never before heard songs from the album’s sessions on a bonus DVD that also features the uncensored versions of the album’s music videos, a short film, a classic interview, TV Spots for the album, and rare studio footage. Normally the inclusion of these songs on a DVD would be a disappointment, since you won’t be able to rock these tracks in your car. However their quality, musically and content wise, is as more of a musical curiosity, and while they’re definitely worth a look (especially in the case of “Would You Ride” featuring Kurupt, Tyrone, Daz, Snoop Dogg, and Amber) they fit along nicely with the rest of the archival material. You won’t want to listen to these tracks all the time, and thankfully they haven’t been shoved onto the album disc, ruining the flow of the rest of this classic album. They’re there for your enjoyment if you choose to check them out, but you won’t have to worry about throwing this brilliant re-master on at a party only to have a bunch of good, but not classic, material pop up when everyone’s done dancing to “Bitches Ain’t Shit.”

Dr. Dre :: The Chronic: Relit and From the Vault
10Classic
Music10
Lyrics10