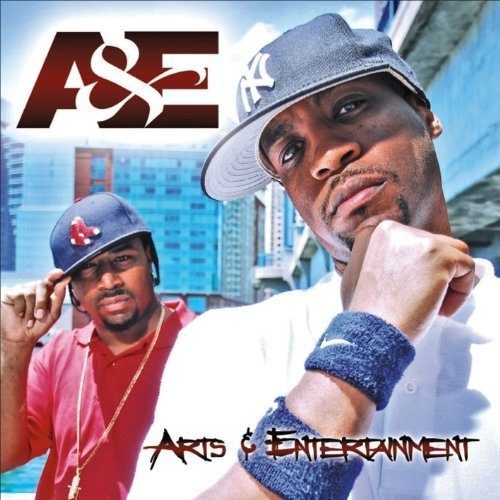 It’s the season for supergroups and collaborations. We’ve already seen Slaughterhouse bring four popular underground rappers together for the better, Del the Funky Homosapien & Tame One will be dropping “Parallel Uni-Verses” in just a month, and in the latest development Masta Ace & Edo.G have joined forces to form A&E, short for Arts & Entertainment. Cleverly their name also implies their membership – Ace & Ed. Okay, perhaps that’s not so much “clever” as it is “obvious,” but it still beats the pants off Cool C and Steady B claiming to Count Endless Bank. The potential of the group is unlimited regardless of how the name is received. Both rappers have dropped timeless classics over the years, but have had a hard time achieving commercial success equal to their stature amongst hardcore hip-hop purists. Joining forces unites both their incredible talent and their loyal followers, so it would seem to be a no lose proposition.

The opening M-Phazes produced “Hands High” is a little deceptive at first, because it rolls out a very tired musical refrain most of us could sing in our sleep, but once the commanding Roxbury vocals of Edo hit the track the melody changes to a stripped down and angry piano loop accented by a symphonic rearrangement of the starting theme. I’m not even mad at it when it comes back in for the chorus because by this point Ed’s torn the house down with his verse:

“Y’all made noise off a phony promo
In the group off of homey’s solo
We Cowboy these rappers like Tony Romo
Rip they posters, spit on they logo
Open they ProTools, erase they vocals
My point focal, I-N-T y’all so local
I’m so global, noble mobile to mobile
See it in slow-mo’, take a photo
We burn kids like Chernobyl
Cause my shit together like Ice-T and Coco”

Things pick up pace on “Fans,” produced by and featuring a guest appearance by Large Professor, who is a welcome addition to the track on both fronts:

“Large Professor, your road dog
I roll with smog sleet and hail to see that we prevail
over this nonsense this world be bringin us, still bangin cuts
After these years, ain’t it lust? We stay in touch
all the time y’all, like a fire alarm so harm
can’t get the best of us, right from what’s wrong”

Don’t presume that Masta Ace is getting shown up by his teammate or the guest stars on every track though. At times on songs like “Little Young” they tag team and trade off bars, but in the second verse Ace takes over and accelerates when both rappers practice alliteration:

“It was Ace not Action, yeah that’s some fun shit
I’m ’bout to stick it to you like acupuncture
Awesome audio, this is me at a glance
Sounds arrogant, but y’all never had a chance
I’m so adamant, let this black man advance
Adios, au revoir, nigga – Spanish, France”

Good tracks are not hard to come by with this dynamic duo. The soulful DJ Supreme One track “Remind Me” creates one of the most fun back in the day raps in a while. Ace brags that when he and Ed join forces they’re “about to flip the game like coin tosses” and it’s hard to argue. DJ Spinna’s beat reverberates and echoes in the background of “Good Music,” featuring a welcome guest appearance by Posdnuos from De La Soul, “just trying to live [and] won’t trust a big butt like DeVoe, Bell and Biv.” Speaking of guest appearances, KRS-One shows up on the Double-O produced “Pass the Mic,” sounding as bombastic and rightfully egotistical as ever, yet not shoving his comrades out of the spotlight (in fact his insistant “MASTA ACE, GET IN HERE” sets him up lovely). The most unexpected and pleasant surprise out of all the cameos is DoItAll from the Lords of the Underground on “Round and Round,” featuring another Supreme beat that fits the lyrical steelo lovely. It’s only a shame Mr. Funke couldn’t join in.

12 cuts don’t seem like enough to do A&E justice, but at the same time it may be that keeping it short and sweet enabled beautiful tracks like the Rain produced “Here I Go” featuring Jamelle Bundy to happen. A longer album would have allowed for duds, but with only so many bullets in the chamber there’s no shots wasted. When Ed spits on this track it’s a personal journey through his career:

“This track really reminds me
Of when I got my deal in 1990
Moms wasn’t behind me, didn’t take too kindly
I had to find me, so I came in blindly
Got a contract to bind me
Ten point demo, had Mercury to sign me
Hip-Hop became a part of
I Got to Have It, Bug-A-Boo, Be a Father
You see I went for mine
My next album, Roxbury 02119
Yeah, it didn’t sell as well
People started sayin they could tell I fell
Third album was comin out sloppy
All of a sudden, Mercury dropped me
It felt like my world ended
Until I found the blessings of independence
Life can bust your bubble
It’s an every day grind and a constant struggle
BAM! I got hit with the target
with Masta Ace, a new project, here I go!”

That more than anything is the difference maker on “Arts & Entertainment.” Sure it’s a perfect tandem, uniting the hardcore hip-hop of Boston and New York. Sure the producers come correct with the beats. Sure, the guests are all that. But many surefire supergroups have come and gone, and not all have succeeded. It’s the heart and soul of Ace and Edo.G that make the difference here – rappers who put their own life into every bar, whether bragging, battling or talking about the real shit they’ve been through. It’s easy to relate, fun to listen to, and A&E is a channel of hip-hop I’ll tune in to watch and listen to time and again.