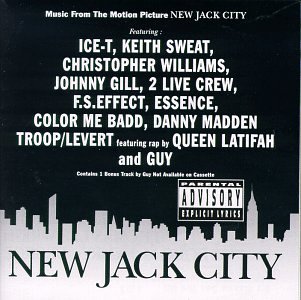 In 1991, following in the footsteps of his famous father, independent film director Mario Van Peebles released his first theatrical film, “New Jack City”. Considering the relatively small budget, the film was a box-office success making nearly six-times the production cost. For those too young to remember the movie or just never saw it for whatever reason, “New Jack City” starred Wesley Snipes and Ice-T in the story of a drug kingpin’s rise to, and ultimately fall from power. Chris Rock, Allen Payne, and Mario Van Peebles also had supporting roles. The accompanying soundtrack contained original material from many of the stars of the era including Troop, Christopher Williams, and Color Me Badd. Much like the other urban films that would follow (“Boyz N The Hood”, “Menace II Society”, “Above The Rim”, etc), members of the cast also contributed to the soundtrack. In this case, it was the aforementioned Ice-T, Christopher Williams, and also Keith Sweat.

Things get underway with Ice-T’s “New Jack Hustler (Nino’s Theme)”, which is by far the best song on the soundtrack. The listener gets a highly detailed view of the mindset of anyone who has decided to immerse themselves in the drug dealing lifestyle. The braggadocio, the apathy towards human life, and reckless disregard for any laws outside of those of the street, all help to characterize Nino Brown and the thousands upon thousands that both preceded and followed him. I believe that if the Academy were into awarding Oscars before Eminem and Three-Six Mafia, then this song would have certainly at least garnered a nomination for it’s earnest view of the world through a young hustler’s eyes.

“Here I come, so you better break North
As I stride, my gold chains glide back and forth
I care nothing bout you, and that’s evident
All I love’s my dope and dead presidents
Sound crazy? Well it isn’t
The ends justifies the means, that’s the system
I learned that in school then I dropped out
Hit the streets, checked a grip, and now I got clout
I had nothing, and I wanted it
You had everything, and you flaunted it
Turned the needy into the greedy
With cocaine, my success came speedy
Got me twisted, jammed into a paradox
Every dollar I get, another brother drops
Maybe that’s the plan, and I don’t understand
God damn—-you got me sinkin in quicksand
But since I don’t know, and I ain’t never learned
I gotta get paid, I got money to earn
With my posse, out on the ave
Bump my sounds, crack a forty and laugh
Cool out and watch my new Benz gleam
Is this a nightmare? Or the American dream?
So think twice if you’re coming down my block
You wanna journey through hell? Well shit gets hot
Pregnant teens, children’s screams
Life is weighed on the scales of a triple beam
You don’t come here much, and ya better not
Wrong move (BANG), ambulance cot
I gotta get more money than you got
So what, if some muthafucka gets shot?
That’s how the game is played
Another brother slayed, the wound is deep
BUT they’re givin us a Band Aid
My education’s low but I got long dough
Raised like a pitbull, my heart pumps nitro
Sleep on silk, lie like a politician
My Uzi’s my best friend, cold as a mortician
Lock me up, it’s genocidal catastrophe
There’ll be another one after me!”

In the movie, Christopher Williams played Kareem Akbar, the CMB member who was also a banker. His contribution to the soundtrack was much more memorable. “I’m Dreamin” has been referenced by the late Notorious B.I.G. and also KRS-ONE. Much of the remainder of the soundtrack is comprised of new jack R&B by artists such as Guy, Essence, and Danny Madden. Johnny Gill and Keith Sweat both deliver slow jams in the form of “I’m Still Waiting” and “(There You Go) Tellin’ Me No Again”. Oklahoma’s own Color Me Badd scored a massive hit with the melodic karaoke night favorite, “I Wanna Sex You Up”. Troop and Levert’s new jack medley of “For The Love Of Money/Living For The City” features Queen Latifah and was played over the opening credits of the movie.

FS Effect and 2 Live Crew bring the soundtrack to a close. 2 Live’s “In The Dust” borrows the opening from Funkadelic’s “Mommy, What’s A Funkadelic?” and contains portions of the oft-sampled “Hercules” by Aaron Neville. The song itself touches on the origins of drugs in low-income neighborhoods. Luther Campbell questions just who is really responsible for drugs coming into the country. His assertion is that the people bringing it in, are not the same ones who are being arrested for drug related crimes. Driven by its singles, the soundtrack peaked at #2 on the Billboard 200. Without bias, I can say that the pure rap songs resonate the deepest within me, but that doesn’t take away from the other songs in any form or fashion. In fact, it is the combination of all the songs that make this soundtrack worth listening to. It is a musical time capsule that the listener won’t mind opening from time to time to get a new jack fix.