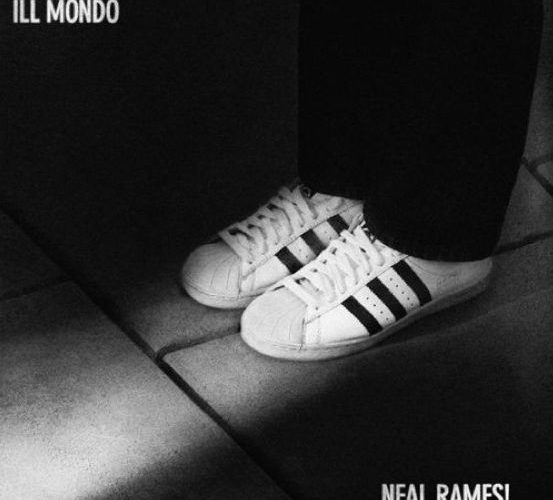 This write-up is either early or late. The featured artist is either Ill Mondo or Neal Rames. This opening paragraph is either inconclusive or completely on point. The MC on this album is either the second coming of the Beastie Boys or the rapping version of Neal Armstrong. The producer is either friends with the aforementioned rapper or one half of a well-respected Bay Area production team. The guest stars are either Percee P, Prince Po or Sean Price. The structure of this format is either irritating you or intriguing you more.

Are you totally lost yet? Well don’t worry about it because you’re only as confused as I was trying to make heads or tails of this album, but as it turns out, 95%-100% of what you just read is true. The rapper is Neal Rames, or at least that’s what he goes by, because his bio implies he may have just said the phrase “real names” a hundred times too many until he got just as confused. Ill Mondo is the production team, but the collab’ with Rames started when he linked up with old friend JRK, one half of the Mondo team. They did a few things together before now that made some noise on college radio, but now they’re ready to bring the whole Mondo team on board and expand. All of the guest stars listed can be found on the album, and that’s a pretty impressive list of cameos for a relatively new artist. They appear on “2 Fold,” “Scriptures” and “Suicide Doors” respectively. And yes that opening paragraph was both intriguing and irritating – I promise not to do that again any time soon.

Thankfully with only one crew producing and one artist rapping other than the aforementioned cameos (plus one more by Stranjah 1 on “I Know Right”) it’s easy to assess the talents of these artists without a whole lot of clutter getting in the way. If I had to put my finger on Neal Rames vocal delivery and lyrical ability, it’s not the Beastie Boys or Neal Armstrong that comes to mind – it’s Asher Roth mixed with Opio from the Hieroglyphics. He’s definitely got that laid back Californian vibe, odd given the recession there may be deeper than anywhere else in the U.S., but Neal doesn’t seem especially hard hit. That doesn’t keep his lyrics from being hard hitting though, such as the real life drama “Natalie Moore”:

“The block was blocked off, got block watched
Feelin sorry cause this kid got merked
In front of the store across from a church
The first Monday of the month got worse
But that’ll be the next verse of course
Dissecting anatomies of Natalie Moore
There’s more horror, much more in store
A foreign object didn’t strike her skull
She lost her life last night, it was cold
The same old story of glory and gold”

Ill Mondo lays down a soulful mixture of horns and somber R&B over the tom-tom percussion, while Neal lets us know Natalie was a drug addict who he watched waste her life away. Generally that’s what type of shit Neal Rames is on, although he does get braggadocious at times on songs like “Sound Sharp!” and humorous on cuts like “No Knot Never” with double entendre generally intended as he talks about problem relationships. It may seem like an easy cop out to say there’s nothing I hated on the 14 tracks of Neal Rames & Ill Mondo, but quite frankly it’s also the truth. I’m also not blown off my ass and over the moon for it either – Neal is a good MC but he’s not the greatest thing since sliced bread and unfortunately by booking such excellent guests he tends to get shown up on his own album. He’s a good writer though and above the average in delivery and breath control, and I would say the same for Ill Mondo behind the boards, so if you cop it on November 17th don’t be scared – this album’s got enough good going for it to get my recommendation. Best of all, unlike so many unsolicited albums that wind up on my desk, Neal Rames & Ill Mondo strike me as having the potential to be so much more than what I’ve heard already, so look forward to their future projects as well. They’ll either be the best thing ever or another good to above average album – and neither one will be a bad thing for you the listener.