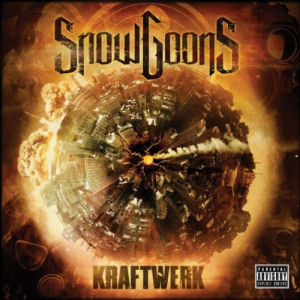 Kraftwerk? Wasn’t there something about hip-hop and that word Kraftwerk? Indeed. In 1982 Afrika Bambaataa, Arthur Baker and John Robie collaborated on the seminal fusion track “Planet Rock” that would influence subsequent popular genres of electronic music. Borrowing melodies and patterns from two songs released in 1977 and 1981, “Planet Rock” was indebted to even greater pioneers of modern music, German band Kraftwerk. While hip-hop and the genre “Planet Rock” helped establish, electro, soon parted ways, the synthesized and syncopated funk left its mark on West Coast hip-hop and later resurfaced in the acclaimed beat creations of Timbaland and The Neptunes.

There’s little of the band Kraftwerk in German hip-hop production team Snowgoons, and yet the title of their latest album, “Kraftwerk,” is apt. Thanks to “Planet Rock,” the term is significant to hip-hop history, and translated it means ‘power plant,’ which is just what the Snowgoons seem to be. They keep churning out high-powered album after high-powered album. Neither them leaving Babygrande Records nor last year’s departure of DJ Waxwork could stop them.

Founders DJ Illegal and Det have no trouble finding like-minded maniacs, such as Danish beatmaker/MC Sicknature, who helps out with production, or various DJ’s who provide characteristic scratched hooks. The formula for Snowgoons albums is established, and they are not about to change it. There are the guests who just naturally blend in with the raw brand of ‘Goons music, rap veterans making surprise apperances, and lots of Massachusetts representatives.

Ill Bill, Sicknature and Sabac Red are “The Uncrushables,” blessing one of the crispest Snowgoons productions to date that marries film score theatrics and imperious drums. Meanwhile Red Eye, Shabaam Sahdeeq and Bekay form The Closers detailing their “Dangerous Ways” over a bouncy production. Proving his sharp skill for the umpteenth time, Esoteric opens “Three Bullets” with a scripture straight out of the Army of the Pharaohs scrolls, followed by long lost LA MC Mykill Miers and the always authorative Shaolin disciple Timbo King, all set to a war-declaring beat and hook. High-octane horns and strings lead “Warlords” featuring a fearsome fivesome that includes one-time Cella Dwella UG and former Arsonist Freestyle. The latter also emcees the album intro “Snowgoons Dynasty,” where the grand gesture SG are able to make is condensed to 2 minutes and 44 seconds.

Again the Snowgoons provide an entertaining mixture of the expected and the unexpected. Cali’s Crooked I and Banish and Jamaica’s Beenie Man meet up for the multi-cultural soundclash “We Nah Play,” the beat’s stoic pounding and melodic eruptions remotely recalling Kraftwerk’s industrialized electronica. Anthemic strings carry the light-footed “Road Warriors,” as Punchline, Fel Sweetenberg and Sadat X float and sting like true heavyweight champs.

Other tracks cater more directly to the (hard-)core audience, such as the string workout “Put Em Up” with Natural Born Spitters and Slaine, or the wild assortment of ivories of “The Madness Begins” with Outerspace and Banish. But “Kraftwerk” covers many bases – with a tribute to the “Rotten Apple,” with a dope cameo by the Barrel Brothers (not Ghost and Beanie but Torae and Skyzoo), with a closing moment of reflection (“Cold Dayz”), etc.

While all featured rappers are competent, those with more individual mic time seize the opportunity to leave a lasting impression. Virtuoso proves he’s a rhyme animal on “Statue,” sticking to one rhyming syllable for the entire joint (and making sense, too). Lateb meets the challenge of rocking one of the album’s more challenging beats with “The Beast.” Showing real promise, Lady Repo reps for the lyrical femcees with “Big Bang Bomb.” While Side Effect delivers the album’s strongest songwriting effort with “Who’s Side,” set to a beautiful, melancholic background. He’s even mindful enough to thank the hosts: “I’m on the Snowgoons’ side, word bond / cause they looked out and helped a lotta indie cats get on / brought us overseas, even put us on some tours.”

He’s right. There really is no one like the Snowgoons out there, doing what they do on that level. A production outfit releasing album after album of quality hardcore hip-hop featuring legions of resilient underground MC’s. If no single track on “Kraftwerk” gets your adrenaline pumping, I can’t help you. If you’re expecting an album for the hip-hop annals I can’t help you either. A Snowgoons release is The Alchemist, Army of the Pharaohs, Stoupe the Enemy of Mankind, Kool G Rap, Killarmy, Canibus, 4th Disciple, Non Phixion, Eminem, and Soul Assassins all thrown in the blender. The result is heavy machinery hip-hop that gets things moving but does not necessarily stand tall through time. The strength lies in the numbers, and with plenty of rock-solid releases Snowgoons have created an undeniable legacy.