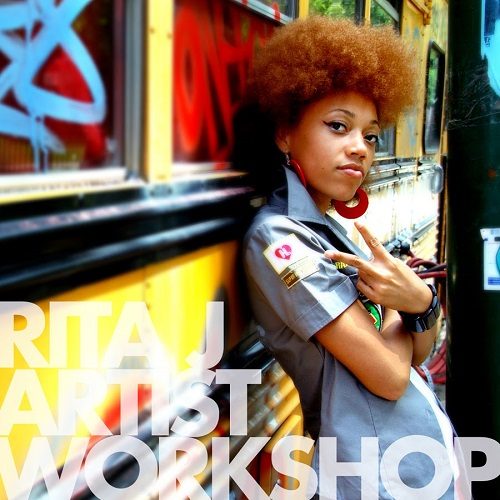 “Artist Workshop” is the debut album by Rita J., who hails from Atlanta by way of Chicago, but through New Orleans, and various points in between. She’s not only a rapper: she is also an actor, dancer, and producer. Opening track “Introduction” makes it obvious that her music isn’t restricted to hip hop. Kenny Keys provides a jazzy beat, and guest Dylan Jones provides a guitar solo to set the mellow, upbeat mood of the album.

The album features production by Black Spade, Kenny Keys, Yuani, Rashide Haadee, Willowtreez, Forekast, and K. Kruz. The jumping-off point for all the beats is hip hop, but the producers explore jazz, house, and soul. The name of the game is smooth, and while the beats may not be rugged and raw, they always sound good.

Rita J. uses her time on the mic to tackle some serious issues: On “Body Rock,” she pays homage to female rappers that came before her and addresses the issues of being a female MC; “Listen” criticizes the materialistic culture pervasive in hip hop; “The Address” is about the need for love. She also gets down to some old-fashioned flossing on “No Regrets” and “Outlasted,” which features Guilty Simpson, who sounds awkward straying from his gutter-rap persona. She also goes in more arty directions: “Inspiration,” the last track, ends in a ten-minute jazzy instrumental workout.

Rita’s subject matter is admirable, and she is a decent writer. She cooks on “No Regrets” and “Dreamin,” as well as low-key tracks like “The Warm Up.” Unfortunately, her flow is often flat and monotonous, which detracts from the songs.  This may have been an issue with the recording rather than her skills as a rapper, because she has moments where she shines. She’s the kind of artist I wanted to root for, but on too many of the tracks her delivery left me cold. I did like the sound and vibe of the album, and it may find a happy home among listeners who are more receptive to her flow than I was.