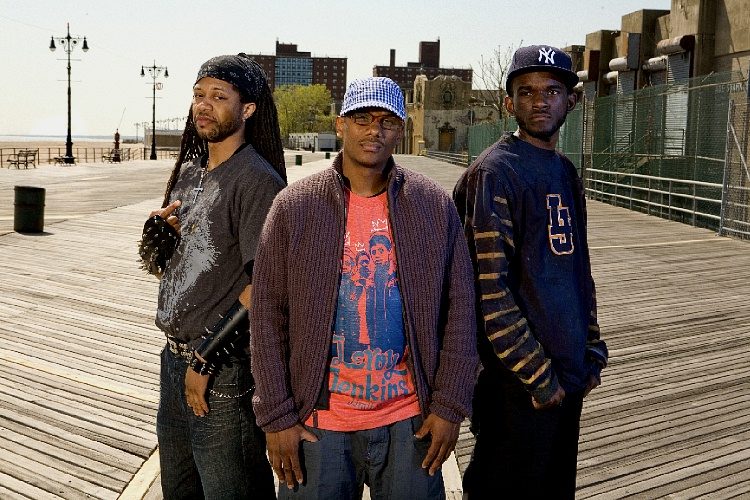 When Tanya Morgan burst onto the scene in 2003 they made an instant name for themselves. In 2009 they made a city. Brooklynati

was their creation and they named their May release after it. This week RapReviews caught up with Ilyas, Donwill and Von Pea (pictured L to R) and after doing some of the usual (i.e. necessary) interview questions we decided to have a little fun, crack a few jokes about bad albums and nerdy pastimes, and ask them about what they think they’ll be doing in the year 2030.

Adam Bernard: Start this interview off by telling everyone about Brooklynati, I know it’s a lot more than just the name of your most recent release.
Von Pea: Brooklynati is a combo is our two hometowns, and we felt it was necessary to represent a hometown in a new way. Once we came up with it as an album title we decided to be dedicated and creative with the delivery of the idea. We made a map, a website, and a bunch of small collectibles you’d find in a real city like restaurant menus, etc.

AB: What were the brainstorming sessions for this like?
VP: We worked quickly when it came to that. It was really just friends talking about what would be cool to do and then making it happen! We’re not afraid to take things to a place some might call “too far” when it comes to a concept.
Donwill: It was pretty organic. Just a lot of tossing ideas and concepts around and seeing what stuck. I don’t think we were workin on any side projects or doing cameos either, just really focused on Bknati.

AB: Is the Brooklynati concept something you’re going to continue with for your future projects?
VP: When it’s said and done, Brooklynati is where we “live,” so it’ll always be spoken of the same way you’d hear Ludacris rep Atlanta. We were saying it on songs back in 2006, so it’ll keep going.
Ilyas: I plan on tying the concept into some of the videos off my solo project.  Think Grand Theft Auto Brooklynati. {*laughs*}

AB: You’ve worked with a number of NYC’s underground scene’s finest, including members of both the AOK Collective and QN5.  How did you link up with these artists?
DW: Just like minds on a small scene.
IL: We walk in the same circles. They’re homeboys from around the way.
VP: And with rappers it seems like if you keep running into one another you’re going to end up making a song! {*laughs*} As for AOK, I always see various members whenever I go out and they are all dope, so we ended up having multiple songs.
DW: Eventually it all eclipses. You’d be surprised at how many collabs are supposed to happen but don’t go down for various reasons.

AB: Speaking of the underground, do you still consider yourselves underground?  If so, what do you think qualifies an artist or a group as such?
VP: Underground is a weird thing because it’s not really a sound, it’s more of a status. I think we’re still unpopular enough to be underground.
DW: Underground is another term for underexposed so yes, definitely in that respect. We are just indie artists tryna carve our lane.

AB: You’re also big in the blogging community.  What made you want to become active with that and what have been some of the more positive things that have come from it?
VP: That just happened. We always had blogs, but when they went from being weblogs to BLOGS and it was about popular content we were lucky enough to have the respect of the bloggers from the jump. When blogs became one of the main promo tools those guys showed us love and kept us visible.
DW: And it’s another form of expression. It’s a pretty cool way to develop an intimate relationship with your fans and speak your mind.

AB: Blogging can be considered kinda nerdy, I should know, I’ve been doing it for six years.  Do you have any other nerdy pastimes that you enjoy?
Von Pea: Nah just being online too much. {*laughs*}
IL:  I am a HARDCORE gamer.  I’ve been playin games since Atari 2600 & ColecoVision.  Hell, I even played on the Commodore 64 a bit {laughs}.  I’ve also become a computer tech geek since I started getting into video and learning to customize my PC for video and graphics.

AB: That’s awesome. Could you give me a few more revelations?  I want each member of the group to tell me something about one of the other members.  Make it interesting!
VP: Both Don and Ilyas have written for magazines. They’ve interviewed people and everything; Blu, Talib Kweli, folks like that. I think that’s kinda ill personally!
IL:  Don is an honorary member of the Asian community.  He should’ve been on the Dave Chappelle draft.  And Von is my hero.  Most don’t know this but he’s on Grand Theft Auto 4 in Harlem somewhere wearing a super colorful hoodie.  Honestly!
DW: Well, Ilyas is pretty smart and knows a lot about religion and other stuff people don’t investigate. And Von Pea is like tech support for me sometimes. {*laughs*}

AB: What’s the lamest album you own and how did it come into your possession?
VP: A dude I won’t name gave me his album on the street and it was the most ridiculous crap I’ve ever heard. Every played out cliché you can imagine – shootout skits, sex skits, fake club bangers…
DW: Prolly the Ray J mixtape. But I like bad music more so than good music.
IL: Ray J’s uncut mixtape.  It’s not lame, though.  It’s so bad it’s funny.  We listen to it several times on every tour and I got a copy from Donwill.

AB: Finally, what will Tanya Morgan be doing in the year 2030?
IL: Hmmm.  Hopefully, Donwill and Von will join me in getting the New World Order going once I fully merge with the Anti-Christ.
VP: At 49 I hope we will be doing shows for fun and extra money. Notice I say extra money.
DW: Chillin.