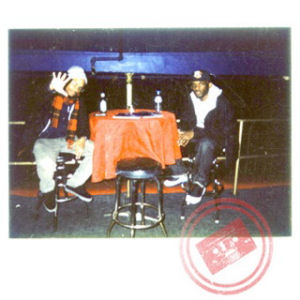 Tanya Morgan :: You and What Army?

Tanya Morgan first made a name for themselves with their excellent 2006 debut, “Moonlighting,” and 2009’s “Brooklynatti.” In the meantime the trio of Von Pea, Ilyas, and Donwill have released numerous solo projects, and proved that their Lessondary crew was worth paying attention to.

2011 finds them half a decade in and down one member. Ilyas, now i-El, left because he saw God and realized he needed to go down a different path, all of which he lays out in a recent mixtape. Donwill and Von Pea have hunkered down and put out this EP as a way to show that they still have a stake in this rap game.

Tanya Morgan’s trademark has always been their loose, low-key approach to making music. Donwill and Von Pea are both talented rappers, but their delivery is almost always toned down and unpretentious. They sound like regular guys telling it like it is, albeit with above-average skills on the mic. This low-key aspect of Tanya Morgan makes them easy to overlook or take for granted, but they always deliver the goods, following the tradition of Native Tongue artists like De La Soul and Tribe Called Quest.

After a brief and pointless intro, “You and What Army?” gets into it with “Do It Tanya.” Von Pea produces the feel-good beat that seems more fitting for July than December, and he and Donwill trade rhymes about hanging out with your girlfriend. “Whatever That’s Mine” sees the boys showing some fire.

“Haterade sipping, niggas listening
Don’t nobody owe you shit
We’ve been anti standby since ’06
They’ve been at my bad side and won’t quit”

Napoleon and Che Grand show up on “Gotta Get Over It,” announcing they are “hitting the reset with no presets.” They get serious on “In the City,” rapping about their experiences living in the crossroads between the suburbs and the hood.

The EP ends with the jazzy “Together” featuring Exile on the mic and boards. Besides Von Pea and Exile, production is handled by Brizzo, AEON, and Astronote. Brizzo’s stomping beat on “We Rollin'” is the most banging thing on here, but all of the beats are quality, laying down the kind of soulful grooves Tanya Morgan have become known for.

At eight songs, “You and What Army?” is practically as long as an album, and there isn’t a throwaway track in the bunch. Tanya Morgan are still in it to win it, and their latest EP is further proof that they are one of the best underground rap acts around.

Tanya Morgan :: You and What Army?
8Overall Score
Music8
Lyrics8