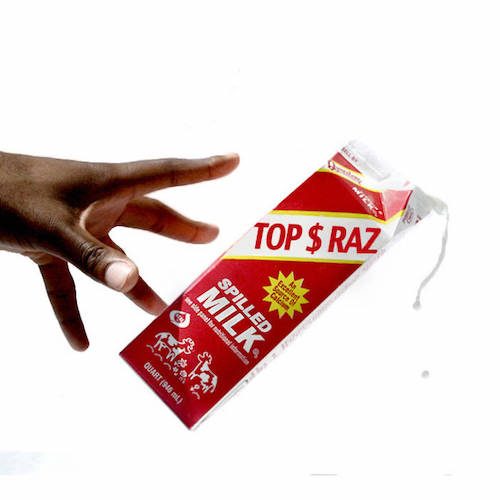 It’s not every day that anyone on the RR staff will go out of their way to cover a self-distributed artist with nothing but a zip file and a MySpace page, but Top $ Raz had an “in” that most other aspiring artists don’t – he knows Adam B. Our lead interview writer also does a monthly hip-hop podcast for the site called The Adam B Experience and Raz has been a regular feature on B’s shows. I don’t just post the shit people, I listen to it, and trust me you should too. Some of the rappers B features on the show are so obscure your average underground rapper stands six feet OVER their heads, but very rarely does he put someone on that makes me say “Why the hell did he play that shit?” B finds the artists that you don’t know, that you SHOULD know, and puts them over by playing their shit. My only knock on ABX is that Adam plays the radio edited versions, but he has argued that anybody who feels a song should thus be inspired to go out and pay for the explicit joint.

I can’t fault Adam’s logic on that point, but I’m not sure how that will apply in the case of Top $ Raz considering he’s giving away “Spilled Milk” for free online. Well if Raz does decide to get this pressed up, it will automatically be worth picking up his LP from your local mom & pop hip-hop shop. The opening title track lets you know exactly where Raz is coming from. He may be broke as fuck and giving away his album for free just to get noticed, but he’s sure as hell not crying about it. Raz is very matter of fact over Terrance Kelly’s beat, with no bragging or BS – just real talk:

“Yeah uhh, I’m just tryin to survive
I’m from the hood lil’ homey they expect me to ride
Devil gave me the finger, angel on my side
He told me to stand tall, I get in and do time
[…]
No funds, no retirement plans
And nowadays, Burger King won’t hire the man
Remember the days my brother used to peddle the rock
I know he mad that he gotta check the felony box
P.O. on his back, make him run to the cops
So I can’t be mad when he back on the block
Like no, no, I won’t fold
Stay on my toes to reach all my goals
‘Til I’m on top I rock on my own
And I’m runnin from my past, my path is unknown”

In the thank you that accompanies your download, Top $ Raz writes “Know that every song on this album came from a real place within myself. Nothing was forced.” That applies to the beats as well as the rhymes, such as “DEAD!” produced by Imagine That. The song gets down for the crown over synths and ivories that bop along casually, allowing Raz to get his Twista along, adjusting his breath control and linking his syllables together to the tempo:

“I pray, you find your way through the bulllll-shit
Stuck in these prohhhh-jects
The prior-ex is calling me, I’m probably
out here serving fiends
I had a dream, a movie scene
Hereditary gangsta lean like
Fuck school, fuck rules, motherfucker just be foolish
It’s cool, make moves, yes that’s how we do this
See that right there now hold up just pauuuse
You can’t run once you go through these doooors
Stunt yourselves with these gangsters and whores
and sooner-or-later you’re stuck in the morgue
Good night lil’ homey, switch up yo’ head
Tryin to be hip but that gangster is dead!”

Each track finds Raz trying something new, never sticking to one particular swag, flow or subject matter. The Harold McCummings produced “Wo(men)” is a rap from the perspective of theFETUS, mad that mommy is drinking and smoking drugs. That’s ill. Terrestrial Papo’s “Get Up, Get Her” has Raz spitting like he’s from the Dirty South, growling and snarling, “underground like Broadway Junction” while he “get it cracking like eggs [and] scramble these dummies.” Yowza! The title for “Cold Blooded” may be misleading, because Imagine That’s track is one of the hottest of the entire album, with classic hip-hop quotes scratched into the hook and a boom so bap you expect Pacewon or Nas to jump in at any second. Raz doesn’t share much of his spotlight, but he does invite IT to join him for this one, while Mike Love and Vithym get down on “Far Rock ’95.” The only other cameos are Kalil Kash on “Be Gone” and Scienze on “Burning Bridge.”

You wouldn’t want Raz to give up much of the shine anyway, because he’s easily one of the more interesting and provocative unsigned artists in hip-hop today. Raz doesn’t just write from the perspective of having nothing and wanting it all, he imagines himself as the protagonist (or antagonist) in a variety of scenarios and tells stories. Don’t listen to Top $ Raz if you want to hear 11 songs about flossing a big whip, selling coca and bagging the hottest bitch in the club. MC Serch could call up VH1 and start “The Black Rapper Show” right in his own neighborhood, but the contest would be over and won before it’s even begun, since it’s best to describe Top $ Raz as he does himself in his MySpace URL: Far Rock Champ.