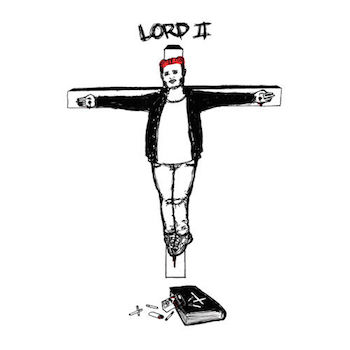 , but to be fair it may be that Nessly didn’t have a publicist until the first album caught on and got him some buzz. So be it – we’re here now for “Give Us, Lord, Our Daily Bread 2.” Don’t let the title get you in a twist – this is not a Bible thumping album full of sermons from the pulpit – or a command to go to confession and repent for your sins in the hope that the Lord will forgive your misdeeds.

If there’s a church here it’s the one built by capitalism. “I went from euros to yen/I want francs and the pounds/I need the Franks by the pound/I need the Franklins right now.” Nessly is if anythingsacriligeous on the song “Bilingual,” casually using the Lord’s name in vain as he raps “Jesus Christ, I need a slice of bread and cheese.” His rap style will be familiar to anybody who’s a fan of Future, Migos orRae Sremmurd. It’s a sing-song flow that’s heavily modulated and arguably heavily medicated.

Production on “Daily Bread 2” is handled by several different people, but the most promising and most frequently recurring is Corey Marcellis. “Days Inn” featuring Tezo has more layering of elements that the average up-and-coming artist track – this is no simple loop left on repeat. It’s actually pretty gothic. Stripped of the chippy warbled raps over the top this instrumental could fit well into a Resident Evil video game, leaving you peering around the corner for the latest resident of Raccoon City that wants to infect you with the T-virus before you gun them down.

The album closes on a high note with “So Far” featuring Zeus Trappin, with an ethereal and uplifting backdrop (Marcellis again) that has shades of Kanye West and Just Blaze in its approach – from the gospel choir to the sped up sung vocals. If imitation is the sincerest form of flattery then it’s fair to say Marcellis is paying them both a high compliment.

I’m doing my best to pay Nessly one as well. I’ve been a stick in the mud about this style of hip-hop at times, as warbling electronic singers were never why I got into rap in the first place. It was the beats and the rhymes that brought me to the dance, and I wanted a high density of words per minute over my beats. We’ve been going in the opposite direction for the last couple of years though, particularly in mainstream rap, so rather than trying to constantly swim upstream I’ll concede and say that Nessly does what works and does it well. If I was rating “Give Us, Lord, Our Daily Bread 2” on being profound, important or lyrically complex I’d have to give lower marks, but for the 2015 era style of hip-hop which Nessly is inspired by he’s as good as any mainstream name doing the same.