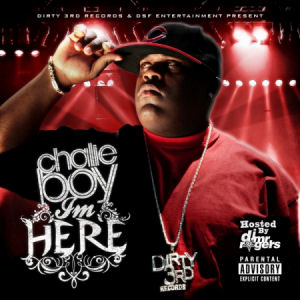 Chalie Boy as an artist, is a bit hard to classify. In essence, he’s a younger version of Big Moe, the larger than life Texas legend who passed away in 2007. His size and propensity to mix singing and rapping make the comparisons easy. Chalie Boy will readily tell you he was influenced by Big Moe, but he is no cheap imitation. Grinding on the independent scene since 2000, Chalie Boy has used that time to refine and advance his style. Big Moe was the O.G., but Chalie Boy has taken the style to new heights. His singing is smoother, his rapping is more fluid, and his overall style is more appealing to a wider audience. That became apparent last summer when Chalie Boy experienced his first real hit with “I Look Good.” What originally started as the follow up to Chalie Boy’s regionally successful “Bumpa Grill” ended up landing him a major deal. The major deal changed the original plans for his sophomore album “Makin’ My Way 2” and led to “I’m Here,” a “street album” collecting all the songs that were scratched from the official album for one reason or another. Interestingly enough, this “street album” is less of a mixtape than “Makin’ My Way,” which is considered Chalie Boy’s debut. “Makin’ My Way” sold big numbers for an independent act, but it was more of a conventional mixtape with borrowed beats making up the bulk of the songs and the entire album being screwed by DJ Bull. In the five years since he dropped his first album, “I’m Here” shows Chalie Boy has made big strides and is more than ready for the national exposure he’s earned.

“I Look Good” was a big club hit and “I’m Here” contains other songs clearly geared towards the club scene. “Let It Drop” finds Chalie Boy rapsinging over a typical bounce beat. Deep bass and rolling snares dominate a simple melody. “Look Like Money” takes a similar approach and more closely mimics the vibe of “I Look Good.” The success of these tracks really depends on your appreciation of Chalie Boy’s style. The music itself is generic, but Chalie Boy’s animated and smooth style inject necessary energy and variety and make the songs more tolerable than they would be coming from any other rapper. Outside of these tracks, the remainder of “I’m Here” provides the listener with a balanced and well rounded variety of songs. “Entertainer (Intro)” sums up Chalie Boy the best:

“True talk, what you see is nowhere close to me
Mama always told me “Be what you feel you’re supposed to be”
But see, this here is a game, I entertain for change and groceries
I gotta make you notice me from T-E-X-A-S to overseas, (woe is me)
Non-strategic, but paraplegics will feel where I’m coming from
I’ll reach out and touch you, wipe your tears after the rain is done
Invite you into my house and help you out if all your veins is numb
Rest your bones, calm your nerves, and patch up that leak that your brain has sprung
The paintings have become more vivid and clear
The life that I lead, you live it by ear
You hear me when I talk about all these diamonds and cars
But you feel me when I talk about all these sirens and scars”

Most rappers claim to speak for the people and stay true to who they are, but Chalie Boy backs his words up. For the last ten years, keeping in touch with his fans and remaining down to earth have been the things that made Chalie Boy successful and he has not changed his ways since his newfound success. Chalie Boy’s music reflects he is in touch with his fan base. “I’m Here” is a heartfelt song about Chalie’s long trip to the top and how he remains firmly rooted in his past struggles. “Change” is an uplifting anthem where Chalie Boy flexes his storytelling skills and celebrates the recent triumphs we’ve experienced as a nation. “Freedom” foregoes the storytelling, but finds him celebrating the artistic freedom afforded to him by hip-hop music:

“The real reason I’m starting to cash out, nigga
I yell what the hell I feel til I pass out, nigga
This is my mother-fucking mouth, nigga
Why you worried anyway? I’m just a simple south nigga
Ain’t nobody listening to what I’m talkin’ bout, nigga?
Or are they really and you just figuring it out, nigga?”

Chalie Boy switches things up with tracks like the aforementioned “Bumpa Grill” and “Nothin’ Like A Slab,” both laid back car anthems. He doesn’t forget his voice has earned him many female fans and caters to them with “Call Me” featuring Chamillionaire, “Deja Blue,” and “Thickness.” “Deja Blue” finds Chalie Boy mixing in water references in his lyrics, while “Gamer” finds Chalie Boy name dropping video games on his verse.

“I’m Here” is a solid album and definitely the type of album Chalie Boy fans have been waiting for. Those aware Chalie Boy has over 4 Greatest Hits collections available might wonder why there is an apparent discrepancy. Though Chalie Boy has no shortage of tracks on his many mixtape series, to date “I’m Here” is the first Chalie Boy CD to really have the feel of an album. It’s a success and definitely a good sign of things to come. The fact it’s available for free download at Chalieboy.net gives you no excuse not to peep one of Texas’ best kept secrets. The fact you can order a physical CD copy if you like it, which you will, gives us old fashioned folks no reason not to at least preview it before deciding whether or not to purchase.