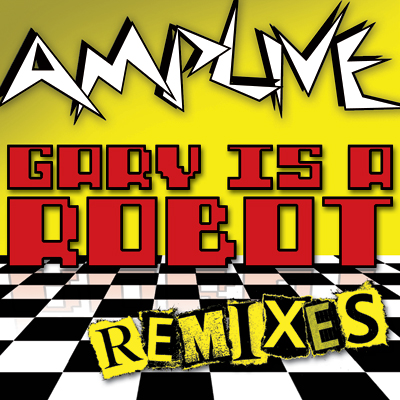 At times like these I honestly don’t know WTF to make of some of the music I’m sent. I’m an open minded guy, but it didn’t even occur to me I was going to need to address that subject when I first read the one-sheet for this EP. Amp certainly had the hip-hop credentials I would need for me to like his shit – he’s done beats for Akon and Zion I among others. Perhaps it’s the “others” I should have paid more attention to, but even then I wouldn’t have been TOO thrown off if Amp Live’s “Gary Is a Robot” EP had sounded like MGMT or Radiohead – artists I’m at least familiar with even if I’m not huge fans of their work.

Nothing about “Gary Is a Robot” reminds me of any of the people named above, which undoubtedly was Amp Live’s intent, but HOLY SHIT does it not work for me at all. I suppose if one was being generous you could say the style here is what would happen if MGMT collided with Daft Punk, but if that doesn’t sound good to you then you can imagine why I’m not overly enamored with this EP, especially given it’s five takes on that theme in equally unappealing formats. To be fair it’s not as though these tracks are poorly produced – the beats are on time, the rhymes (such as they are) are perfectly in sync, and the whole album has that glossy slick finish like the mixing board was shrinkwrapped in plastic. Unfortunately this whole thing is meant for a place where confused teenagers experiment with drugs, gyrate wildly until they sweat off five pounds, and can barely form a coherent thought in their head. That’s probably the best way to appreciate Amp Live lyrics of such stunning wit as these:

“Gary is a robot, he has fifty million cars
He drives a spaceship, that goes very very far
He has the girls, the clothes, the money and the bars
And if you hangin with him then you are a movie star”

The original version is the only one which is really tolerable, as the contributions of Micro Jaxson and Trackademics over a less abusively offensive club beat can be swallowed even though it still has a corny bitter aftertaste. I saw one wit refer to this style of music as “post-jiggy club hop” and if that’s the definition I’d rather be jiggy or pre-jiggy instead. I have to grade the rest of the EP on a curve of “less tolerable” to “unrelentingly awful,” and in that order I’d choose the James Curd remix (it’s no longer a club song, but who knows what the fuck it is), the Al Velilla remix (the most Daft Punk of the bunch), the Grand Theft remix (on some 2009 Black Eyed Peas shit) and the opening Blu Jemz remix dead last. Regardless I’d still rather bash my face with a shovel than listen to any of the five choices here. Somebody out there likes this kind of music but it’s not me. Amp Live, try again, or at the very least go back to working with Akon and Zion I – that at least I didn’t hate.