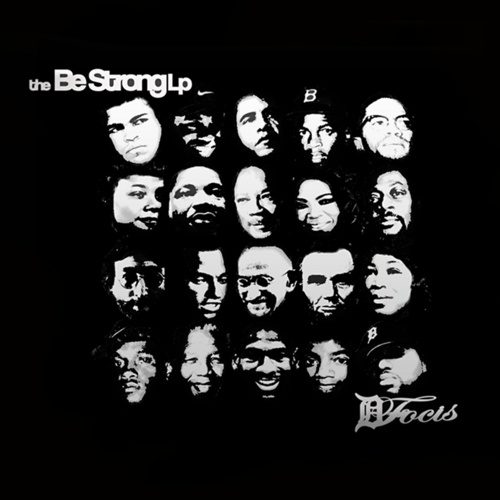 Producer/rapper D. Focis’s new album, “The Be Strong LP,” is available for free from the artist’s blog (dfocis.blogspot.com). It serves two purposes: to firmly establish D. Focis as both a rapper and a producer, and to offer a message of hope to anyone struggling to keep their head up in these hard times.D. Focis has a lot in common with Kanye West; both are producers-turned-rappers; both have focused their rhymes on their personal struggles and hopes; and both are deeply religious but outspokenly flawed. “I’m a Christian, but not a pastor,” he raps, and throughout the album he is up front about his infidelities and his wayward past.

On “Here I Am” he explains, “my position in this hip hop’s to not slick talk ya/Maybe just to walk with ya/I’m often underestimated because I ain’t bold.” That’s a fair assessment of his style. Focis isn’t a fierce battle rhymer, and he doesn’t possess much flashy lyrical dexterity. His gift is sharing his thoughts in a way that is compelling and convincing. Honesty is the name of the game for D. Focis. He’s had his share of setbacks and hard times, and “The Be Strong LP” is his way of putting his troubles down to music. Marital struggles, career struggles, the death of friends, he’s been through it all. On “Forgiveness” he begs his wife to forgive his indiscretions. He talks about his experiences in the music industry on songs like “Real,” rapping about “selling tracks to food stamp lines” and how “I done quit so much I’ve even quit quittin’.”

D. Focis is especially honest when talking about his religion. He’s had a spiritual awakening recently, and he makes constant reference to his relationship with God, and how lost he was before recommitting himself to his faith. You could almost call him a Christian rapper, but that label seems too narrow for what he’s doing. He’s sharing his beliefs, but he’s not proselytizing, and through it all he remains brutally truthful about his own failings as a Christian. On “Who Do You Believe In?” Focis talks about having a moment of doubting his faith:

“Today I heard a man say God don’t exist
Hit me like a bag of bricks
Because he said it like it was a known fact
Composed and relaxed staring at me through my MacBook
And normally I wouldn’t be that shook
But lately I’ve been going through it
And that’s why I had to put it into song
Point is, one of us is wrong”

He discusses how he used to be a casual Christian, saying grace, praying he didn’t get girls pregnant when he didn’t use a condom, and sleeping in on Sunday morning. Then he talks about a friend of his who committed suicide (Curtis Weeks, to whom the album is dedicated), and the role his faith had in helping him get through that ordeal. “I found peace in belief/Faith in His grace/Courage to continue in this race,” he raps. It’s a powerful song, and shows one of D. Focis’s greatest strengths: His ability to rap about serious issues in a way that isn’t cliche or dogmatic.

“I Wish” picks up on this theme, with Focis rapping over an uptempo gospel beat about how we as people need to look out for one another, with the hook spelling it out: “I wish I could give all I’m longing to give.” It picks up on the major theme of the album: Be Strong. In Focis’s hands, this isn’t a casual cliche, it’s an earnest call to action: Life is hard, and the only way you are going to survive is if you stay strong. The message is reiterated by guests throughout the album, including his mother. It’s also a constant theme of his rhymes. He knows that times are tough, and that life kicks you in the teeth sometimes. He doesn’t wallow in his own misery or feel sorry for himself, though. He recorded this album as a way to prove to both himself and the listeners that you have to be strong, and makes a convincing case over thirteen tracks.

The music fits the lyrics. D. Focis handles the bulk of production, and his beats are for the most part on the mellow end of the spectrum. Songs like “Miracle,” “In The Beginning,” and “The Voice” have a smooth R&B feel to them, while “Who Do You Believe In?” and “Number One Fan” have more of a classic soul twist. It’s all well-produced, proving that rapping isn’t D. Focis’s only talent. Lord Lamont and Leak help him with production on three tracks, and Bobby Creekwater, T. York, Kamilion, Sashay, Tha Mr., Wizdom, and Wise and Quesan all make appearances.

As good as the music is, what sells “The Be Strong LP” is D. Focis’s lyrics. Like Brother Ali, Focis’s rhymes are deeply personal, religious, and uplifting without being cheesy or preachy. Much like Ali’s “Us,” “The Be Strong LP” is a grown-up album about dealing with grown-up issues in a grown-up manner. D. Focis is an artist to keep an eye on, and this album is well-worth the dowload.