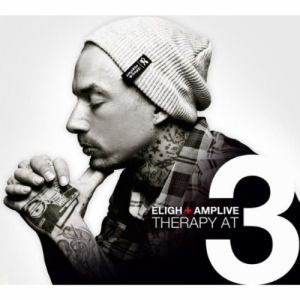 Eligh and Amp Live :: Therapy at 3

Great music is therapy. At the end of a rough day at work, in the middle of a break up, in recovery from a hangover, the right song will frame the mind in a way that allows us to get through the sandpaper patches in our life. At the same token, therapy is an oft-cited reason for musicians and artists to lose themselves into their production. It’s not hard to imagine artists using the studio as a vent for their feelings, or a resting place for the pressure on their chests. In the end, a great song should have taken the burdens of both artist and listener as it pulses through the earphones.

Living Legend Eligh and Zion-I producer Amp Live come together to give us “Therapy at 3”, a collaboration that takes its title from the free-flowing, therapeutic studio sessions that birthed this album. As a result “Therapy at 3” has a stream-of-consciousness structure, both lyrically and musically, that can make it hard to follow on the first listen. This isn’t an album that you fall in love with instantly, it’s an acquired taste that grows on you after a few spins. It also has to be taken into account that this is probably one of Eligh’s most personal works, but that doesn’t mean his thoughts and stories are naked in the music. Amp Live also reaches further into his experimental box of beats, spreading each song thick with electronic and synthetic tones, rarely thumping a simple 1-2 drumline, and running everything on an irregular cadence.

“First Contact” makes landfall after an earthy bass guitar intro opens up the album. Amp Live crafts together a space-like beat that develops as the song churns on, beginning as a simple synth loop and ending with strings, synth, canned drums and a feeling of observing planets while floating in zero G. Eligh uses the song as an opportunity to provide some introspective, like he’s conversating with himself and trading wisdom with each lobe of his brain.

“Imagine that, the brain is so potent at 10 percent
that even just a moment full of this
can push you through a waterfall of acid rain
create a cage to protect yourself from you
believe me when I say we are all in our own way ALWAYS
any which way the wind blows my pen goes
and that’s my mantra to the haunt the haunted
to flaunt the conscious content
and build a conscious context
stop the caustic combat
I’m just a man who fights himself on a daily basis
and I’m tired
we’ve been wired wrong through the entire long haul
this is not a song y’all”

The listener gets a hint of what’s to come when Eligh says “doesn’t make any sense to you? To me it does..” before the bridge hits. Both the lyrics and music transition from one stage to another in a seamless tempo, one that might leave the listener lost when they realize that one half of the song doesn’t sound like the other. It’s like that for most of the album.

“Guides” starts with some robotic words and sounds from Eligh and Amp Live, before breaking into a relaxed blend of MIDI tones and piano keys. Eligh uses the theme of exploring nature to link his inner thoughts and contemplations, painting some nice imagery: “Let’s take a walk and fish through this stream of consciousness and dream” and “catch shooting stars in a Mason jar”. Personally, I feel like this is when Amp Live flexes his talent the best, when he can mix his electronic leanings with some legitimate instruments instead of mechanizing his entire production, which happens more or less on the next track “Destination Unknown” featuring The Grouch and Zumbi. The beat starts off choppy, and sounds more like two machines grinding against each other when Eligh kicks off the song. It starts to get better and less instable when Grouch and Zumbi take their turns with the mic, and while I think its nifty that Amp creates a different soundscape for each MC, I think the production on this song sounds like it gets in its own way.

Amp Live continues with the mechanized approach with “Stethoscope”, taking some elements of dubstep in laying the foundation of the track, but thankfully keeping a sense of cadence and rhythm to prevent the song from going all over the place. The chaotic feel of the beat translates into Eligh’s verse, which I can’t get a solid handle on. Guest Basik is easier to interpret, using the theme of “stethoscope” and sending kids to the hospital in his punches, which are pretty good and manage to keep the song a little grounded.

“Devil’s Medicine” details Eligh’s addiction to cigarettes, which Amp Live backdrops with a haunting beat that utilizes both sides of the speakers to accentuate the wailing samples and hard percussion, making the listener get lost in the beat as Eligh speaks on his regrets in staying hooked on tobacco. “Beautiful Addiction” features guest spots from Grieves and Blake Hazard, and speaks on the age-old conflict between man and women; from the difference in opinions on sex, how the opposite complicates the dream of stardom and success, and how they complicate everything in general. Amp Live does a nice job of keeping the beat simple, and although it can seem a little monotone, it does have some shelf life and keeps itself from sounding stale after multiple listens.

Each song on “Therapy at 3” does have a unifying theme to differentiate them from each other, even if it’s hard to draw what it is when Eligh speaks in his stream-of-consciousness style. “Tattoo Song” is pretty self-explanatory and explains Eligh’s connection with getting inked, “Stop Running” is definitely a bitter session of therapy against girls who’ve done Eligh dirty, and “L.A. Dreamers” featuring an off-kilter guest spot from Busdriver casts a storytelling eye on the streets of L.A., from the actors trying to make it to the gang members that break shit. In the end, the therapy session with Eligh and Amp Live is a great listen. Not everything is executed perfectly, but this album grows on me more and more with each listen. I know that some fans of either artist might be disappointed, because it’s an atypical album for both. Amp Live definitely draws farther outside the lines with his production than usual, and Eligh’s stream-of-consciousness requires the listener to truly immerse themselves into the songs to appreciate them. Then again, that’s how music becomes therapeutic anyway.