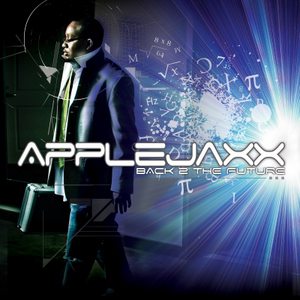 Applejaxx :: Back 2 the Future

Applejaxx is a Boston-based rapper who released his debut album “Back 2 the Future.” This showed up in my inbox, courtesy of his label. Normally I’d pass on Christian club rap, being a fan of neither Christian or club music, but there was something in what Applejaxx was doing that made me want to spend some time with it.

First of all, there are the beats, supplied by T. Bizzy, Gregory “DreamChord” Thomas, and Luke Witherspoon III. As the title suggests, the emphasis is on futuristic beats, and the producers deliver. As with the Black Eyed Peas’ last album, many of the beats on “Back 2 the Future” are inspired by dance music. Singles “Applejaxx” and “Apple Dapple” are banging club hip hop, complete with repetitive hooks and thumping bass. They would be just more club joints except for a lack of sex and drugs, and shoutouts to Jesus in the lyrics. As Applejaxx raps in “Apple Dapple”:

In other words, good clean fun. Is he really rapping about getting buzzed on mochas? Yes, he is. If you think that’s corny, then this probably isn’t the record for you. Go pick up the new Ghostface, because Applejaxx keeps it strictly Christian and PG. All of the song credits come with a reference to a passage from the Bible, and all of the lyrics are about being a Christian.

The content may be clean, but there are some dirty beats on here. “Fear Factor” has a grungy synth echo, while Applejaxx drops rhymes about being “fresh with the testament” and “purifying rap with the minerals.” And therein lies Applejaxx’s secret weapon: he tends to rhyme in stream of consciousness non-sequiturs like Lil Wayne meets Kool Keith at Bible study. There is a wacky lyricism behind Applejaxx’s very serious and passionate rhymes. He may be rapping primarily to spread gospel, but dude can rap. “I’m a caffienated Christian in action,” he rhymes over a thumping robot beat on “C.I.A.,” “Bread of life on the table/eat without smacking/Rick Flair arm lock pull down the choke holds.” He’s got the scripture in there, but it’s surrounded by some good old fashioned swagger so that listening to this isn’t like being fed medicine. He also doesn’t get too judgmental, so he sounds more like someone sharing his beliefs and less like a preacher.

Alright, so the more dance-oriented tracks got kind of repetitive and annoying, but then most dance-oriented music is annoying and repetitive. He rounds the album out with songs like “Dunkin’ Donuts” and “805” that channel the whole Neptunes minimalist thing, to good effect. Applejaxx’s squeaky clean image and Biblical lyrics may not win many secular converts, but  so what. The production is slick and Applejaxx backs his message with solid rhymes. Fans of Christian rap can rejoice that they have a great new artist to get into, and adventurous fans of club-oriented hip hop should give this a listen. They might be surprised; I know I was.