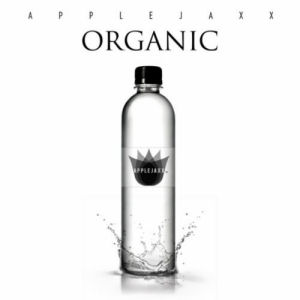 Applejaxx is the a North Carolina artists who has been making club music about Jesus for the past seven years. He has released three albums and several EPs, and has just released his latest, “Organic.” As with most of his previous albums, “Organic” is a concept album, built around the idea of returning to the pure, natural, and unadulterated.

Opening track “Rise” sets this up, with Applejaxx taking the persona of someone who has strayed into wickedness with a “GPS with no moral compass.” The hook comes in with the lines :

This is all wrapped up in the trappings of club rap: loud synths, crisp beats, Auto-Tuned singer on the hook. Only where normally the song would be about popping bottles and making it rain, Applejaxx and company are rapping about finding God.

Applejaxx works the organic concept for all it is worth. “Original” has a bouncing Middle Eastern beat, which Applejaxx uses to compare his flow to organic food. The metaphor is pretty tortured, but the beat is banging. “Got Jesus” uses passing up pastries for whole food while grocery shopping as a metaphor for choosing God. “BlueBerry Slangin'” has a wicked Southern rap beat, and Applejaxx raps about accepting God, with blueberry slanging representing the fruits of his faith.

The more Applejaxx tries to shoehorn his raps into the organic concept, the weaker his rhymes are. It’s when he ditches the idea of being organic that he delivers his best rhymes. “Runnin'” is one of the stronger tracks. It’s a slower song built around a gorgeous R&B hook with Applejaxx rapping about working hard to overcome the struggles in life. He ends the album with “Live Fresh,” which has a bugged-out beat and some of Applejaxx’s strongest rapping.

Tech Groove handles most of the production, with Kajmir Royale, Epik, and THX all contributing one track each. They offer up solid , trunk-rattling club rap. Kajmir Royale’s “Original,” Tech’s “BlueBerry Slangin'” and THX’s “Live Fresh” are the standout beats, and I could easily see Waka Flocka Flame doing some monosyllabic mouthbreathing over them.

Instead, Applejaxx keeps it strictly about God. Even the techno song “Passion Fruit” is about the Passion of Christ, not getting dirty in the club. As with all Christian rap, this is primarily intended for the faithful, and it’s hard to see someone who isn’t an evangelical Christian bumping this in their car (including this reviewer). Nonbelievers will take a pass, but for believers, this is an album of well-produced, well-executed hip-hop that your parents and pastor can get behind. Applejaxx works the organic metaphor to death, but he is passionate, sincere, and devout. If you are into Christian rap, you will definitely want to pick “Organic” up.