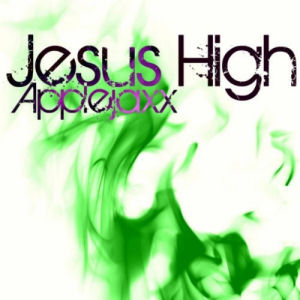 “Jesus High” is the follow-up EP by Christian rapper Applejaxx, whose debut I reviewed favorably last November. Back then, I was impressed by the Boston rapper’s Christian-friendly club rap. I’m feeling less generous towards “Jesus High.”

Part of it is that “Jesus High” is more explicitly Christian. I realize that criticizing a Christian rap album for being too Christian is like criticizing shrimp gumbo for being too fishy, but with all five tracks focused on praising God and celebrating Christ, there’s not a lot of subtlety here. In a press release, Applejaxx explained:

“Jesus High reminds us to lift Christ higher than everything else. Living for Christ includes dying to our flesh daily. With the right lenses we can see our future in Christ and not just focusing on the things of this world.”

Not being a church-goer, I’m much more impressed by artists who reference their religion in their art rather than make art specifically about their religion. What Applejaxx is doing here is basically preaching, which means listening to this is like sitting through a Sunday sermon, great if you are looking for affirmation of your faith, not so great if you aren’t on board with that faith in the first place.

A bigger problem is that the prosthelytizing negatively impacts the rhyming. There is so much focus on the message that the music suffers. The God talk seems shoehorned in, cutting down on the natural flow of Applejaxx’s raps. He also resorts to some corny metaphors. A lot of this is built around references to Apple and iPad. “App for That” is about how Jesus has an “app” for your spiritual longing. It’s like a preacher trying to appeal to the young crowd by hipping up his message. It wasn’t working, even for a Mac guy like me.

Beats on the EP are well-executed club rap, with production by Applejaxx, Chizmatonic, International Show and G-Styles. As on his previous release, there is a futuristic element to the beats, especially on “The Future,” which sounds like the Neptunes. “ILife and “Jesus High” both have stadium ready synths and an R&B flair. I’m not a fan of this style, but the producers do it well.

If Applejaxx is trying to make hip hop for a Christian audience, he’s succeeded. “Jesus High” is convincing club rap, and Applejaxx has skills as a rapper and producer. On the other hand, the sermonizing message means it probably won’t resonate with anyone but the converted. Christian hip hop fans will no doubt appreciate Applejaxx’s God-friendly hip hop, but I’m taking a pass.