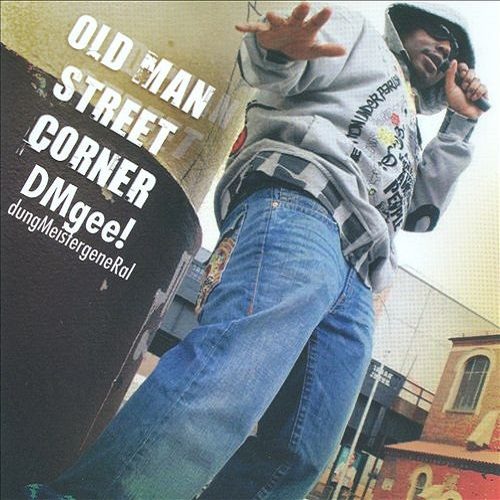 RR readers please take note – this DMG is not to be confused with the DMG who recorded the seminal 1993 Rap-A-Lot release “Rigormortiz”. That’s likely the reason the rapper here chose to not only spell out his name on the album’s spine, he chose (via a very odd capitalization style) to explain that it stands for Dung Meister General. Oddly the press release ignores those conventions to introduce us to “The Method to the Madness of DMG.” The key facts to know – DMG was born in 1972, used to be known as Absolute, and apparently got a buzz six years ago when he recorded songs like “Worshipful Master” and “The God Intoxicated Man.” DMG may be the first rapper in history whose bio repents for being “sinfully stripped down,” believing his music just wasn’t hardcore enough for mainstream hip-hop. He lists his influences as De La Soul, Saul Williams, Count Bass D, Kool Keith and “anybody who thinks before they write their shit.”

I’m not sure I would have included Kool Keith in that list, who I often believe is an ACCIDENTAL genius who is either brilliant or horrible because he DOESN’T think about what he’s doing, but it’s definitely the most relevant name on his list. Dungmeister and Mr. Thornton have a few very obvious things in common – they believe in being self-produced, purposefully weird, and not trying to maintain a conventional flow. It is here though that the similarities end, because Keith’s vocal tone remains oddly compelling even when his lyrics are obnoxiously bad, owing in part to 25 years of being a hip-hop legend and cult hero dating to his Ultramagnetic days. Keith may be a little older than DMG, but one would think if both got the hip-hop bug in New York during the 1970’s and early 80’s that 25 years of busting raps would produce similar levels of ability to command attention on the mic – sadly nothing could be further from the truth.

“Old Man Street Corner” makes it clear that some people are born to rock mics and some are not. In fact I regret to say DMG is one of the most definitive cases of ANTI-charisma I’ve ever heard. To get a general idea of why he utterly fails imagine someone who sounds the least bit vaguely similar to LL Cool J doing his whispered flow from “Phenomenon” – then imagine he does it for a WHOLE ALBUM. DMG seems genetically incapable of raising his voice, putting any emphasis on a single bar he speaks, and often starts a bar only to get quieter as he’s spitting it. The hallway closet DMG seems to have recorded this album in didn’t improve matters. The vocals bounce around, double up and overlap in ways that were undoubtedly intended to be artistic – they’re just annoying though. It’s even worse when you start trying to pay attention to the words on tracks like “Punishment”:

I should have stopped at “Hassle the Hoff” but I’m apparently a glutton FOR punishment. Going back to Kool Keith, I’ve often criticized Mr. Thornton for being his own worst enemy by producing his own beats – but to be fair Thornton at least has enough hip-hop sensibility to give his tracks a heavy bass bottom. DMG apparently doesn’t believe in bass – I don’t remember a single track out of 15 that hit hard. The drum beats sound incredibly synthetic and phony too, like someone sampled tree branches being slapped against tin cans and plastic pails. “PopShhh” tries to to convince us it will be interesting from the title, but the handclap only beat makes raps like “nigga you so stale” ironic, and randomly throwing in horn breaks and TV samples doesn’t make it better. The same can be said for the howling wolves and flute notes tossed around on “Never Mind.” It’s not as though DMG doesn’t have elements that could be dope if used the right way, it’s just that he continually uses them in the most inept ways possible. DMG unintentionally makes you sympathize with his antagonist on “Paris, Pls!Listen2MyDemo,” because by the time the track is over, you’d think rap was whack and turn up your nose at it too.

One or two times on “Old Man Street Corner,” DMG nearly breaks through being awful to just plain boring. “Wife, Bitch & Kids” has DMG almost staying on beat, almost saying something relevant, almost breaking out some good scratching and good samples – but there’s no inherent sense of timing to any of it. Whether he’s trying to or not DMG forces me to compare him to Kool Keith one more time, because Keith gets away with ignoring song structure by at least having known what it was at one time – like a painter or photographer deliberately playing against negative space. DMG on the other hand never seems to have had any idea what good song structure was in the first place, so he’s got nothing to play off of at all – he’s just throwing shit at a wall to see what sticks. It’s scary but true to think that with nothing more than a laptop and a copy of FL Studios, Soulja Boy can produce a better sounding album than this, but if you asked me which album I’d actually want to listen to again Soulja Boy gets the nod.

I get that DMG is going for being purposefully weird, but all the Dungmeister General has done on “Old Man Street Corner” is be purposefully bad. Unfortunately being awful can generate a cult following all its own (see YouTube phenom “Bangs” for example) but in this case I urge you to stay far far away. Bangs is funny, DMG is not. The sad part is I’m sure DMG is sincere, since this album is professionally shelled and shrinkwrapped, and even has a CDDB entry that pulls up when I open it with iTunes, so I apologize for having to say this to the General – no one should ever buy your album and you should retire from rap immediately. You have no charisma, your punchlines aren’t funny, your beats irritate my ears and there are eight-year-old rappers who have better flow. This album utterly fails.