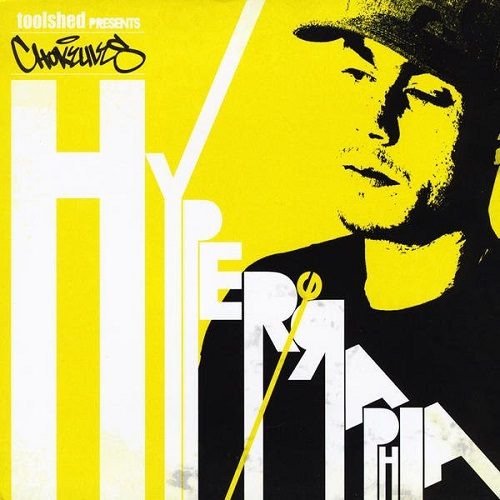 Ladle Rat Rotten Hoot? Dehs loot eht, n the tool shed. Confuzzled? No probalo. Like Chokules I’m played games with the printed word. Hypergraphia can be writing sentences that can be read as palindromes, or converting words into phonetic similars, such as Ladle Rat Rotten Hoot sounding like “Little Red Riding Hood” with an accent if you read it out loud. It also doesn’t have to be anything of these things – it can simply be an obsession with writing. Chokules claims to suffer from this syndrome on this LP, but it’s far from the debut musical. Perform the Chokules has, Aceyalone with, Lootpack with, the Dude Devin with, the Sensei El with, Canada and stages United States on. Chokeules is experienced in hip-hop and ready to play word games with the listeners in North America and worldwide on a 14 song CD.

“So much more than what you showed up for
When the force hits home like it’s at your front door
In an uproar bounce until there’s torn up floors
We tore the roof off then kept it goin outdoors
No remorse, I’m goin off on a tangent
I wasn’t invited, I was shot from a cannon
Would have been an advantage had I thought of a landing
If I stumble on answers, I pretend like I planned it”

Chokeules may claim to be runnin on “Fumes” but the beat and the rhymes of the song suggest otherwise, thanks in large part to the production techniques of Timbuktu and cuts of DJ iRATE – although actually the DJ for most of the tracks on “Hypergraphia” is Young Fes. Songs on “Hypergraphia” tend to blend together, as “Fumes” blends almost seamlessly with “Feel Free” thanks to an overlapping word sample, and that’s just fine with me. I don’t know any of the individual members of the song and unless you were already a fan of Chokeules you won’t either, so instead of focusing on individual rhymers you can focus on the vibe. It’s definitely on the liberal side, as their example of “insane” would be “voting for Palin and McCain,” but it’s unlikely the majority of their audience would complain. They’re also heavy on samples, both hip-hop lines like Mad Skillz (“after MC’s smoke me, take a toke”) on “Lyrical Dope” and movie pop culture like “Swingers” (“You’re so money and you don’t even know it right now”) on “So Money.” Of hypergraphia it is another example, lines borrowing from resources other and them reconstituting. They swing the net wide and catch a little bit of everything.

It’s hard to give any specific definition to what Chokeules does verbally or musically other than “have fun.” There’s no profound message to “Hypergraphia” nor should you waste time looking for one. Why does Chokeules believe there are “Gremlins on the Wing” when Ghettosocks, Pip Skid and Timbuktu join in on the mic? Simple – they wreck shit. That’s all there is to Chokeules, but with the throwback 1990’s underground boom bap punchline stylee that’s all you really need. If rappers you like seriously who don’t take rap so, “Hypergraphia” have of the Chokules on your type flow.