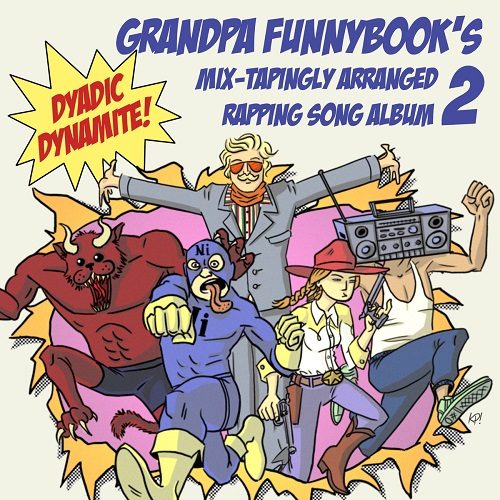 In 2011 Pedro ‘DJ Complejo’ Hernandez reviewed the comical compilation “Grandpa Funnybook’s Mix-Tapingly Arranged Rapping Song Album.” At the time it struck me as the kind of one-off project that an indie record label can get away with, able to poke fun at the conventions of the mixtape genre while not insulting their core audience. For example: you’d never see a DJ Drama or DJ Khaled mix hosted by Grandpa Gangster or Grandpa Swag. Even though P’s scores for the album only rated it “slightly above average” he did note that “the songs that do stand out are dope enough to warrant future spins,” which for a free album is almost as much as you can ask for.

Now to be clear “Grandpa Funnybook 2” doesn’t have to be free – you can certainly pay for it if you’re so inclined since they have a “name your price” option. If not they’re conent to let you sample it simply because it’s a sample of the various artists that Wordburglar features prominently on the album, appearing on a third of the hour’s worth of songs. Some are just snippets though such as a 808s Remix of “Drawings With Words,” and others are remixes of songs from “3rdburglar” such as DJ Nerd42’s revision of “Rhyme O’Clock.” And speaking of nerdy, CasUno and Intrikit’s “Geek Speak” is over-the-top in a very enjoyable way.

Intrikit’s background track may be lost on those who were born after 1990, but it’s an intentionally whimsical throwback to a first generation Nintendo game called “Duck Hunt” that had the most annoying digital dog of all time. Jorun Bombay’s production on “Three Bucks in Quarters” also harkens back to the 1980’s, throwing in samples of classics like Asteroids, Defender and Berzerk. Most songs don’t require an nerdly encyclopedic knowledge of old school video games though. The Timbuktu produced “Burial” featuring Frank Deluxe and Chokeules is as now as tomorrow, with a hip-hop sound that has just a hint of dubstep’s electronic grind. Fresh Kils’ laces “Invincible” lovely as the tag team duo of Ghettosocks and El Da Sensei break down the boom bap. Samples of Ol’ Dirty Bastard and Buckshot scratched in the hook are nice enough to give hip-hop heads goosebumps.

The Transformers samples are a nice touch too. As with the previous “Grandpa Funnybook” album though, the mixtape is a mixed bag where the good songs are good enough to repeat play while the others will slowly fade away from your memory. Death*Star’s “Penitent” is like what D-Sisive would be without charisma or a forceful delivery. Beefy & Mustin’s “You’ll Never Get Away With This” has the exact opposite problem – it’s TOO amped up. The self-produced track is like a Kool Keith instrumental that’s all black piano keys at the left side of the board, as though that would make the high-pitched, high-strung quivering rap voice seem more tolerable – it doesn’t. The Grandpa Funnybook skits really don’t do it for me either. I understand they exist to stitch the album together conceptually, but I’m more than happy to skip past them the moment that they come on.

On the whole there’s more to praise than to complain about from this Canadian cast of like-minded cohorts. Jesse Dangerously & Satellite High’s “Dum Out” reminds me of EPMD’s “I’m Mad” in a pleasing way, Touch’s “Klingon Bastards” walks the line between a nerdy Star Trek exercise and dopeness without dematerializing, and Swamp Thing’s “Time Machine Massacre” sneaks up on you not looking and gets you head-nodding and toe-tapping. On the whole I’d say it’s slightly better than “Grandpa Funnybook 1” which may not seem like high praise, but since you can set your own price I’d say the good material here makes it worth at least $5 Canadian or U.S.