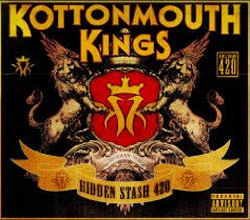 For over ten years, the Kottonmouth Kings have been ignored by most mainstream media outlets while continuing to release album after album. In the process, their fan base has continued to flourish and grow, much like the pot and mushrooms they openly indulging in. A common belief is that marijuana usage expands the mind and allows for more creativity. With the Kings, I’ll take that as the truth due to the fact that it has been quite a while since the Kings released an album that didn’t have at least twenty tracks on it. Just a year after the release of “The Green Album”, the Kings return with the fourth installment of their popular “Hidden Stash” compilations. This particular joint (pun intended) consists of forty tracks, split between two discs, and features guest appearances from the likes of Tech N9ne, X-Clan and Potluck.

The first disc opens with a brief intro, followed by “Can Anybody Hear Me”, “Take A Ride”, “Evolution” and “Tangerine Sky”. Within these first five tracks it becomes obvious that Kottonmouth can go on in a few directions with their music. Things range from piano and drum pattern-driven beats to tunes that almost sound like full-blown acoustic music that Everlast would be proud of. While this compilation is billed as “previously unreleased material”, I heard “Stoner Bitch” a few months back on Potluck’s recent “Pipe Dreams” album. Midway through the disc, the drug anthems start coming into the mix, but the Kings also stress some of the negative consequences that can come with abuse, on tracks like “Demons”. The boys find themselves with “a paper bag, full of legal tender” on a road trip to make more money. This leads in to one of the biggest standouts of the album, “Sacrafice” (their spelling, not mine). It focuses on the sacrifices (what else?) that people make in order to see the dreams of their families and loved ones come to fruition. The first disc ends with the hippie-inspired, “Let the Music Play”.

The second disc opens with “Runnin’ Things”, and for some reason, it reminds me of an old Bobby Brown song from the “Ghostbusters 2” soundtrack. For the most part, the second disc follows the same path laid down by the first, so try to imagine how my eyebrow was raised when a Men Without Hats interpolation found its way into the mix. That’s right. “We Can Smoke” puts a twist on “The Safety Dance” as they proclaim “we can smoke if you want to”. Another interesting song is the doo-wop-inspired ode to a certain “lady” named “Miss Smokey”. It provides a little bit of comic relief, and shows that the Kings don’t take themselves too seriously. There are a few cuts that are full-on rock numbers like “Free Willy” and “Keep It Movin'”. I think that Greg Nice and Smooth B would appreciate the small tribute on “Funky Rhyme”. The compilation comes to a close with “High Hopes” which predicts prosperity even in the face of seemingly never-ending adversities.

For what it’s worth, there are a few good hits in the stash, but some duds like “Tip Off” seem to have just been tacked on to even out the track total. In anycase, add in an additional DVD with two hours of behind the scenes footage, music interviews and more, and you’ve got enough material to keep even the heaviest users satisfied until the next shipment makes its way out into the streets.