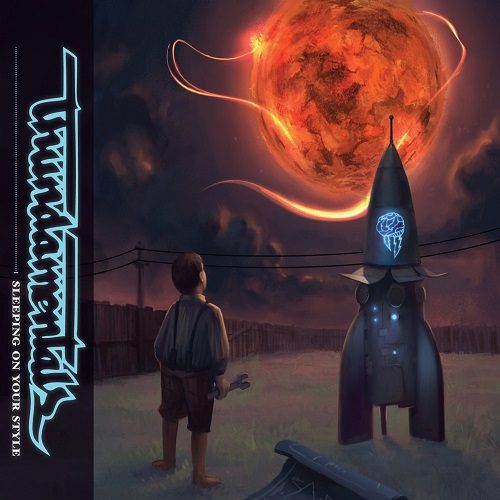 Thundamentals :: Sleeping On Your Style

Steve ‘Flash’ Juon made a pretty convincing argument for Aussie hip-hop while reviewing Illy, and I’ve reviewed a handful of Aussie hip hop albums myself, so I won’t spend too much time defending the genre. From the few acts I’ve encountered on Obese Records, namely Drapht, I know that they specialize in more positive, conscious hip hop. Thundamentals fit that category.

Comprised of DJ Morgs, Tommy Fiasko, Jeswon, and Tuka, the group’s eponymous EP was named “Best EP of the 2008” by Ozhiphopa.com. After listening to their debut LP, “Sleeping On Your Style,” it’s not hard to see what people got excited about.

The group is grounded in solid production work by DJ/producers DJ Morgs and Tommy Fiasko. The first thing you’ll notice when you put this on is how good it sounds. The bass is deep, the drums kick, and the boys expertly mix in samples and scratches. Like all Aussie producers I’ve heard, they know what they are doing, and they do it well. The title track features trippy synth sounds mixed with what sounds like the Knight Rider theme song; “Serial Illa” has a reggae feel; and “The Mash” has a bouncing beat layered with heavily riverbed surf guitar. It’s one of several songs with a sixties bent: “Bad Man” flips a sixties sample like Mark Ronson mixing the Dap-Kings, and instrumental interludes “Masterminds” and “Safari 500” show their love of 60s film soundtracks. The surf guitar makes another appearance on “Tardis Take Off,” the second hip hop Dr. Who reference I’m aware of (experimental act Daelek being the first).

There is a musical quality to several tracks here, and not only because they incorporate live instruments. Jeswon and Tuka sing/rap on tracks like “The Mash” and “Move It Up.” They might not be putting The-Dream out of a job, but they can carry a tune. That, combined with their feel-good rhymes, gives a pop bent to the music that reminded me of the Black Eyed Peas. I’m not talking “Boom Boom Pow” Peas, but their pre-Superbowl incarnation, when they were backpackers with pop aspirations. In fact, the whole vibe of this record reminded me of the kind of hip hop coming out of L.A. at the beginning of this decade, stuff that was moving away from the violence and glitz of mainstream rap and towards something more uplifting.

Not to imply that Jeswon and Tuka are lyrical lightweights. “What goes up like a thriving economy must go down like the price of your property,” they rap on “Broke Pocket Philosophy,” a song about the current economic crisis.” “El Mundo” is a song about the state of the world, and “Bad Men” catalogues various breeds of losers. Of course, they also take time to celebrate their love of hip hop, weed, getting laid, and video games. They even give a shout out to the Sega Master System classic “Alex Kidd in Miracle World” on “My Favourite Rap,” and state that their favorite things are “rap, sex, and GTA.”

Is “Sleeping On Your Style” rough, rugged, and raw? Not so much. If you are looking for some dirty, gully, street-ass hip hop, then Thundamentals ain’t gonna work for you. That’s not their scene, and they don’t waste time pretending to be the toughest thugs on the continent. Instead, they focus on keeping true to the spirit of golden age hip hop while keeping it current, managing to be fun and conscious at the same time. If you need further proof that Aussies understand this rap thing, Thundamentals are it.