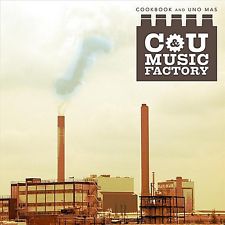 It’s unfortunate that a full bio on the history of L.A. Symphony and the members of the California rap group would be longer than this entire review. Their role as pioneers and inspiration to fellow “left coast” rap artists who choose to make experimental and innovative rap music should not be diminished. In fact most hip-hop fans and students will rank them with the Hieroglyphics and Living Legends as crews whose influence extends far beyond the number of albums they sold as a group. Furthermore each crew has spun off numerous side projects, solo artists, combinations with other like-minded artists and enjoyably eclectic hip-hop music. Though they’re currently on hiatus as a unit, the same thing can be said about L.A. Symphony’s membership, as you can routinely find new projects from CookBook and Pigeon John among others making noise in a world of jaded rap fans. Please just take my word for it when I say L.A. Symphony is a great crew that should get much greater due.

In 2010 CookBook and Uno Mas may be the two artists who best carry the L.A. Symphony movement forward. That’s not meant to dismiss any of the other rappers who have come and gone from the crew and done their own thing, it’s just that “C&U Music Factory” really embodies that independent California left-coast spirit that makes their rap so funky fresh. While other West coast rap collectives often find their solo projects devolving into hip-hop that’s artistically cutting edge yet simultaneously hard to bop your head to, Cook & Uno stick to the basics that make their rap boom bap without losing their creative edge. “Radio Plays” gives you that warm laid back Westside feel with a mixture of nostalgia for old school with brand new vibes. It’s nice to hear someone NOT hating FM for once:

“I’m late again, out the gate I play to win
So I hate to begin the day this way a major sin
to my inner set of rules, rushin to the middle school
The kids are cool, but I’d rather be home alone with you
So I zone out, to old soul on 92
or 93.5 cause I know that’s what you’re doin too
Ooh, I turn it up another notch
As I watch the road and listen wishin that I was on top
The side by side with all the music comin on the morning show
The clever banter’s better than the songs, they’re borin though
I’m steppin to the A.M., dreamin wide awake while I work
The radio plays my favorites, takes away the day’s hurt
I even heard Kool Herc, durin the old school lunch
And DJ’s that tell jokes to pass the time during the rush
On the way home I hush, though with much anticipation
Such a beautiful sensation to know you’re home waiting”

As you may have guessed from Uno Mas’ name, he’s very proud of his “Mexicano by blood” heritage, and he’s got a little bit of a Mellow Man Ace or Sen Dog to his vocal tone, but even on the opener “Presente” he emphasizes he’s down for ALL peoples. CookBook really ups the ante though by spitting a whole verse in Spanish to show off his Puerto Rican roots. It may be obvious more Cali MC’s would be bi-lingual given the cultural atmosphere but it’s still fly to hear. The second track “Set it Off/Make it Count” brings all of their different influences together, combining smooth harmonies and warm melodies with guitar riffs as you ride along to a true headnodder beat. Guest appearances are frequent and welcome throughout “C&U Music Factory,” from Evidence on “When You Rock and Roll” to DJ Rhettmatic of the Beat Junkies on “L.A.” to the soulful Raquel Rodriguez on “Aiyyo,” a track where the duo vow with no pretentiousness to “release the hits you gon’ feel in your abdominal” and “bring the title home and keep it here.”

On the whole “C&U Music Factory” is a highly enjoyable, well put together album largely produced by CookBook himself but also featuring able help behind the boards from JJ Brown, Muneshine and Million Watts. This is not the first album Cook & Uno have done together as a splinter group off of L.A. Symphony, but it may be their best to date. Look for this album in retail stores on January 26th and you won’t be disapointed – this is fresh hip-hop soul to start the years with 10’s off right. Apologies to anyone who finds the song titles or track order changed up as this was very obviously an ADVANCE advanced copy of the album, but one which was simply too good to sit on waiting to review any longer.