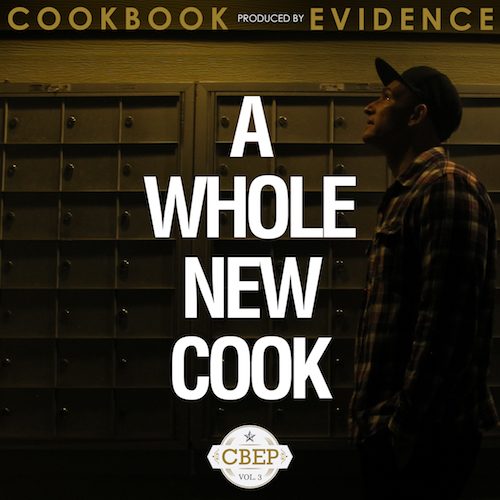 CookBook fans are familiar by now with his penchant for doing collaboration albums with various producers. The latest example in this series is “A Whole New Cook,” which finds the L.A. Symphony product being paired up with the stealth drone rap legend of Dilated Peoples fame. We’re used to hearing Evidence on the mic, but he’s done plenty of dope work on the boards as well and at times doesn’t get the credit he deserves for it.

I suppose I should just go ahead and say it’s a little weird for me to hear more mentions of “Omaha” on track four than you usually get from Peyton Manning in a Denver Broncos game (not any more though – sadly he’s retired). It’s just a passing moment in the overall presentation though, one which sees Evidence flexing his chops in the studio, even though I was not-so-secretly hoping from the outset that this would be a rap collaboration. Only one track officially has them rapping together though, and Ev limits himself to just a few words of the chorus for “Phillip Drummond.” For those of you too young to have ever watched the show referenced by the title, Cook wastes no time filling in the blanks with the first bar:

“Your flow’s dead like Gary Coleman
When Ev hooks up the beat, it’s white boy day like Gary Oldman
The track hangs like a peach and she can take a beating
Execs see me with E and now they take the meeting
Style’s provocative, classic fresh Binaca breath
The Blanka of your opera, shock you with the opulence
I might just pop off on the populace – wreck Metropolis…”

CookBook leaves me vexed and conflicted. On paper he drops bars that range from average to slightly above par. On the microphone those bars don’t always translate into hotness. I suppose it’s the warm California climate and the medically available herb, but I’m always waiting for CookBook to get more amped up, and he stays constantly relaxed and nonchalant. It’s especially telling when you listen to Madchild spit on “It’s On Me,” and even the love-him-or-hate-him LMNO grabs your ear canals more than Cook on the same track. Why can’t Cook shift out of second gear and rev the engine a little bit?

If you need any more evidence (no pun intended) of what I’m talking about he raps the exact same way on the first single “Preachers of L.A.” Same tempo, same breath control, same delivery, same tone. He’s got good bars but no energy behind it.

I really want to like CookBook more than I do. He’s got all the right credentials, he consistently works with the right people, and I can tell he puts thought into his bars before he grabs the mic to spit his writtens. I’m not saying CookBook needs to just get crazy in the booth like Sticky Fingaz or Lil’ Fame, but I’d like an emotional level I can resonate with, not the completely humdrum unconcerned raspy delivery with the exact same intensity on every track. “A Whole New Cook” is a good album, at times even a clever album, but it’s one I won’t listen to that much.