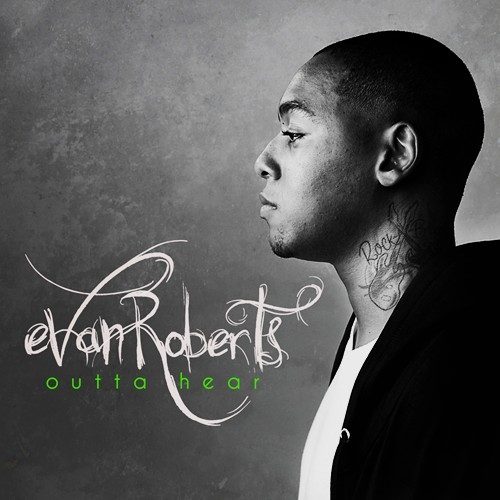 Hear’s what we do know about Evan Roberts – he’s a singer and songwriter from Orlando, Florida. He gained some degree of fame and notoriety for his contributions to the Birdman song “Written On Her” featuring Jay Sean and Mack Maine. Had the song not become a single he might have remained in relative obscurity, because “Written On Her” was only included on the deluxe edition of Birdman’s last album. Since the song’s success he has parlayed his fame into launching his own career as a singer, culminating in the “Outta Hear” EP featuring production from Oddz.N.Endz (who produced “Written On Her”) and Starkiller, along with cameo appearances from Ya Boy, Cory Gunz and DJ Khaled.

movie (seriously he wouldn’t even need prosthetics – those ears stick way out), what’s up with that unflattering guitar tattoo on his neck, why this album is called an “EP” when it’s 13 tracks long, why someone sent an album that’s largely sung to a site called RAP Reviews (though that seems to happen a lot) and what business Evan Roberts has singing in the first place.

To be fair I listened to this entire “EP” several times trying to figure out the appeal of Evan Roberts. I just don’t see it. His vocal tone has no resonance or volume. His lack of singing ability resorts in him crooning in an almost monotone fashion, particularly on songs like “Red Cup,” which either makes him a bad vocalist or a misguided rapper. The problem is his lyrics aren’t really good enough to rap OR sing – they’re simplistic, immature, and uninteresting if you have no underlying personality. As a writer for Birdman he can probably get away with that – okay he was probably writing Jay Sean’s parts and not Baby’s actual rap, but let’s give him the benefit of the doubt and presume he did. Birdman was never a great lyricist to begin with so you wouldn’t be able to tell the difference, and what he lacks in ability he’s always tried to make up for with personality. Evan Roberts can’t pull that off. He clearly thinks he IS Birdman though on songs like “Millions to Blow.”

“Listen – I am on a rock’n’roll diet, I ain’t tryin to hide it
Somethin like Cobain on a Jimi Hendrix vibe tip
Hand me my guitar bitch, cause I’m gon’ fuck the crowd with it
Goin back in history cause that’s where I am mentally
I am – truly knockin to this, I indulge myself up in booth
Create timeless hits, 2010 Led Zeppelin
You can call me KISS, this pinky finger
with this ring, that smell like shit {*laughter*}
That’s so I am, that’s so I is”

It’s hard to decide which part of that verse is more insulting – comparing himself to Cobain, Hendrix, Zeppelin or KISS – because they’re all WAY off. He calls himself a “five star rock star” when he’s not even a one star bedroom crooner, and yet he feels obliged to call out other performers “signing with no talent, and claiming they got next.” I’m afraid that’s as clear a case of the pot calling the kettle black as music has seen in many a year. One thing’s for sure though, without the rap cameos and the production by Oddz.N.Endz and Starkiller, there’s no way I would have gotten through this whole album once, let alone twice or more. If Evan Roberts is the new flavor of the month, somebody tell the chef to change the recipe.