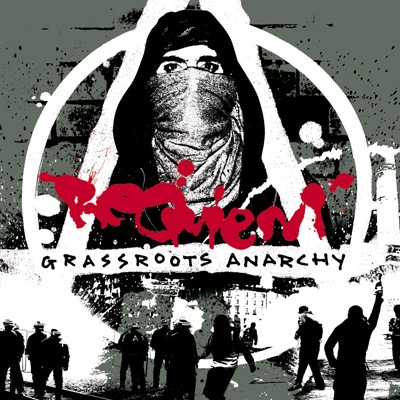 With apologies to MC Requiem, this review was cursed. We assigned this album out several times for coverage and each time there was a snafu with getting it back for one reason or another. Requiem politely but passionately asked that RR write up this review before the end of January if at all possible, and personally provided me with a digital copy to replace the physical CD that had long since been lost. It’s hard to say no when someone’s been both that nice and that persistent, so I’ve taken up the torch of getting this long overdue review done myself so Req can catch wreck.

That said Requiem’s treatment shouldn’t be considered “favorable” per se given there are some things about “Grassroots Anarchy” that are immediately accessible, and some that will stump even the most diehard of Aussie hip-hop fans outside of Australia. Like most of his fellow sceners down under, production is a strong point of Requiem’s album – homegrown beats that have a strong boom bap without coming across as copycats of better known U.S. or European producers. The sonic landscape is as vivid as anything on Muph & Plutonic’s seminal release “…And Then Tomorrow Came” and packed into an incredibly short but dense 10 track album. If you’ve heard that album you know this is high praise, and if you haven’t, go out and get it already.

“Slum Gutters” reflects Req’s disappointment in the “Melbourne state of mind,” but the violin and ivory combo raise even the filth and sewers up to beautiful art. “Cinephile Confessions” is eerily reminiscent of early 90’s New York rap for all the right reasons. “Apeshit!” may be my favorite among the many greats here – one of those rare tracks that can actually give one cold chills. A hypnotic bassline, ringing bells, funky horn BLATS at the right moments are tied together by crisp drums and symphonic strings – setting Req up perfectly for his aggressive delivery:

“Fed up with these gaping flakes
I take a Bowie knife to a scathing fake rocking Bathing Ape
Pathetic rappers making tapes
No more Mr. Nice Guy to the emerging hate
Subtleties on my EP? Your mistake
See the tiger palm strike – straight to your face!”

There’s so much to like on “Grassroots Anarchy,” from the short and unapologetic “Pacifist’s Dilemma,” to the 4:13 long title track,chugging along like a subway train headed full speed at your face, to the guest appearances of Fluent Form and Maundz on the MF Doom “Hey!” inspired track “Street Journalists.” Unfortunately I have only one bone to pick with Req and it’s a rather big one – he’s the second hardest to understand Australian rapper I have ever come across, topped only by the man who cameos on his album – Fluent Form himself. A lot of what he’s saying is just too hard to follow for me even with the most diligent of scrutiny. It’s not the fault of the production, as the levels are mixed almost perfectly, it’s just the accent’s a bit too rugged for my American born ears. In general I find Req COULD be one of the greats of the most emerging hip-hop scene in the world today, but as I can’t make it all out that does detract for me from his score as an emcee whereas his own countrymen will no doubt rate him higher. The beats on “Grassroots Anarchy” are good enough that this one’s worth a listen either way.