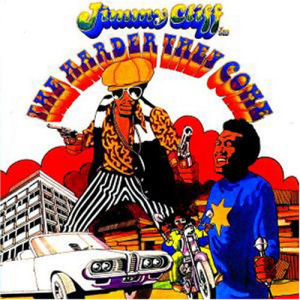 Just as marijuana is alleged to be a gateway drug to a more serious and expensive drug habit, “The Harder They Come” soundtrack might be a gateway to a serious and expensive addiction to reggae music. At the very least it was one of the principle albums that introduced reggae music to the Western mainstream, and along with the Wailers’ 1973 album “Burnin’,” cemented many people’s love for the then-nascent genre.

I wasn’t born when “The Harder They Come” came out in 1973, but it was still a gateway album for me as well. It was my reintroduction to reggae music, allowing me to hear reggae for what it was. I grew up in a California beach town, and everyone I knew who liked reggae was a stoner, a trustafarian, or a frat boy, none of whom I related to or wanted to be like. I liked ska, reggae’s spunkier antecedent, but reggae seemed like boring music for hippies and burnouts. “The Harder They Come,” made me see how wrong I was.

The movie “The Harder They Come” is about Jimmy Cliff as Ivanhoe Martin, an aspiring reggae singer turned unwilling criminal/folk hero. The soundtrack, curated by director and co-writer Perry Henzell, not only documents a vibrant music scene, it also documents Jamaican music’s transformation from ska and rocksteady to roots reggae. Desmond Dekker’s song “007 (Shanty Town)” shows the hyperactive ska morphing into the slower, smoother rocksteady, while tracks like the Slickers’ “Johnny Too Bad” are archetypal roots reggae.

Cliff is the star of the film, and he is the star of the soundtrack as well. He contributes four out of the ten tracks (or six of twelve tracks on the 2001 reissue, which features instrumentals of two songs). He opens with “You Can Get It If You Really Want,” a chipper, upbeat song speaking to the power of positive thinking and perseverance. It sounds almost like an American soul song, and is evidence of how Jamaican artists adapted American R&B to their own native riddims. Cliff offers some more encouragement on the title track, singing:

“I’d rather be a free man in my grave
Than living as a puppet or a slave
So as sure as the sun will shine
I’m gonna get my share now, what’s mine
And the harder they come
The harder they fall
One and all”

His standout song on the album is arguably “Many Rivers To Cross,” in which the optimism of “You Can Get It If You Really Want” runs head first into grim reality. “Many rivers to cross,” he sings. “But I can’t seem to find my way over.” The song moves at a slow burn, sounding like soul mixed with gospel interpolated by Jamaicans. Cliff’s “Sitting In Limbo” is another take on the same concept and mood.

Toots and the Maytals are the other group with multiple songs on the soundtrack, and, like Jimmy Cliff, mix gospel, soul, and reggae. “Sweet and Dandy” is a perfectly acceptable example of late-sixties reggae, but it is far outshined by “Pressure Drop.” The recording sounds much fuller, and it hums along with a propulsive energy, with Toots working the limited lyrics for all they’re worth. His delivery is so expressive that it wasn’t until recently that I realized that there are only four lines in the entire song.

Not only was “The Harder They Come” most Westerner’s first encounter with reggae, it was also their first encounter with toasting and the rastafari movement. Toasting, the art of a deejay sing/talking over a track that is one of the main inspirations of rapping, is demonstrated on Scotty’s take of Keith & Tex’s “Stop That Train,” listed here as “Draw Your Brakes.” Copyright lawyers who have issues with sampling in hip hop would have a heart attack with toasting, in which a deejay would basically be sampling an entire song, often uncredited. Toasting is a more difficult variation of reggae for Westerners to get into, as it is best experienced live, and the Jamaican patois can be fairly impenetrable. I like Scotty’s “Draw Your Brakes,” but that and a few Prince Far I songs are about all the toasting I can handle.

The rastafari movement (“isms” are contrary to the philosophy of rastafari), Jamaica’s home-grown combination of Christianity and Black power, pops up on “Rivers of Babylon” by the Melodians. I had previously only heard Sublime’s version, and associated the song with Sublime’s druggy surfer image. The Melodian’s original is 100 times better. It is a powerful, moving song about descendants of enslaved Africans lamenting the homeland that they were forcibly removed from. It’s ironic that the song was covered by a group of white kids hailing from the country that epitomizes the Rastafarian concept of “Babylon.”

While “The Harder They Come” soundtrack is an important document of reggae, it is also a phenomenal album. There is not a bad song on the disc, and several of the songs (“Many Rivers to Cross,” “Johnny Too Bad,” “Rivers of Babylon”) are among the best reggae songs ever recorded. It gives the listener a sense of the depth and possibilities of the music coming out of Jamaica at the beginning of the seventies. “The Harder They Come” is not only an essential album for any fan of reggae, but for any fan of music period. Be warned if you pick this up, however: you just might find yourself digging deeper into the reggae crates, and it could trigger a lifelong addiction to Jamaican music.