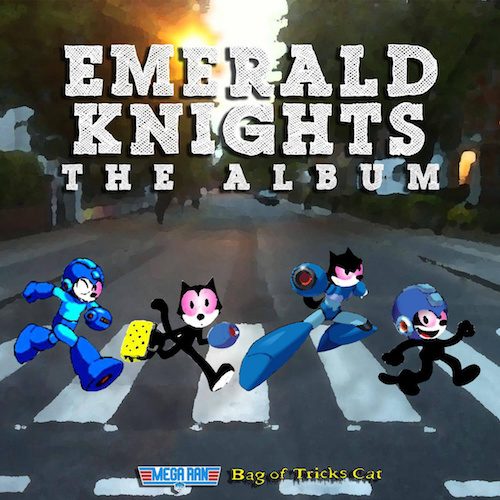 For me the phrase “Emerald Knights

” immediately invokes images of the Green Lantern Corps, but “Emerald Knights: The Album” has virtually nothing to do with comics other than that both of the artists would be be fans of them in general. The artist “Bag of Tricks Cat” on the other hand has EVERYTHING to do with the Felix the Cat cartoons I watched as a young’un. His grandmother (Ann Bennett) actually sang the theme song. No matter how old I get I’ll always remember the jingle that opened every show: “Whenever he gets in a fix he reaches into his bag of tricks!” The name is a trip down memory lane, as is the beat to the aptly titled “Come Together (The Song That Might Get Us Sued).” Both Felix and The Beatles were at their peak before I was born, but their popularity still resonated through my childhood.

I honestly hope that loop doesn’t get them sued, because it’s a quite enjoyable hip-hop update of The Beatles, much like when KRS-One remade “Hey Jude” in the opening of BDP’s “Criminal Minded, from the album of the same name. Even though this collaboration is a chance for the popular Mega Ran (Random) to do something new and different from his other releases, that old (and welcome) tendency to rap over video game samples and chiptune melodies reasserts itself on “Dragon Spirit” featuring SkyBlew.

Oh and if you don’t recognize the NES game referenced in the title here’s a longplay, where you can also clearly hear the melody they sampled right from the game’s intro.

The Beatles definitely seem to be more of an influence than gaming this time around though, including a track called “Stroll Down Abbey Road” featuring Nappa and Professor Elemental, where “Yellow Submarine” and “Sgt. Pepper” references are dropped before Random even gets a chance to bust on the beat.

By Random’s standards this is not a long release – in fact it clocks in at just over 24 minutes including the intro and outro. That’s a plus though since in Ran’s own words it was meant to be a quick appetizer before the main course of “RNDM” hit stores and stereos everywhere. As usual it’s Random’s introspective lyrics that carry the songs, such as the thoughtful “Bound to Be” where he examines his desire to constantly tour and create music even as it causes conflicts with his interpersonal relationships. Ultimately though the song’s title reflects his ultimate conclusion – it’s just what he was meant to be doing. Judging by the album he’s absolutely right.