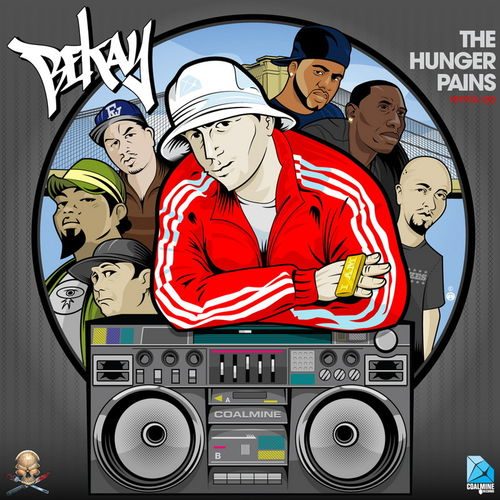 This EP is basically a digital 12″ of remixes from Bekay’s recent “Hunger Pains” album. The EP features two versions of “I Am” and “Brooklyn Bridge,” one with new verses over the original beat, and another with the original verses over a new beat.

It starts off with “I Am” featuring the Dilated Peoples rapping over the Alchemist’s original beat, and Bekay throwing some new rhymes:

The People’s style is a perfect fit to the track, and they add some West Coast flavor to the song’s embodiment of East Coast hip hop:

Next up is DJ Qvali’s remix of the same song. He smooths out the edges with some nice soul strings and wah wah guitar, giving the track a blacksploitation feel to it. Qvali got on the EP as the winner of a remix contest held by www.nodfactor.com, and he definitely earns his prize.

“Brooklyn Bridge (Pt. II)” is a continuation of the album track with Sha Stimuli, Push! Montana and Bekay laying new rhymes over DJ Babu’s original beat. Sha uses his turn on the mic to paint a picture of Brooklyn that doesn’t gloss over the rough parts:

It’s followed with M-Phazes reimagining “Brooklyn Bridge.” He beefs up the song with some horns, guitars and electric piano, giving the song a space-age lounge feel.

None of the tracks stray too far from the NY underground feel of “Hunger Pains,” which is a good thing. Fans of “Hunger Pains” will want to cop this. If you are unlucky enough to have slept on Bekay, this EP is an indication of what you’ve been missing.