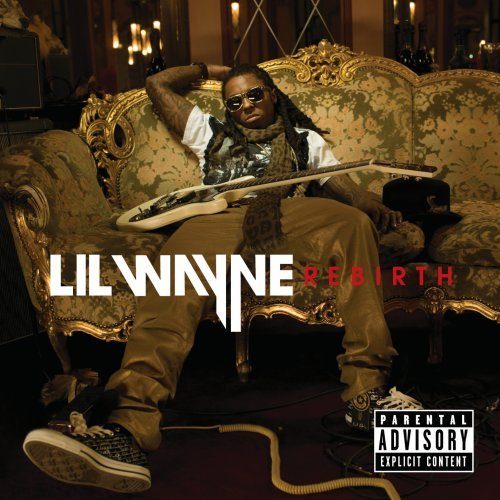 One problem the music public faces when reading reviews is the absolutely insane assumption that the writer whose critique you’re reading isn’t a liar. That we don’t have preconceived ideas about a record before we even listen to it, or that the comparisons we make between one artist and another are based on actually listening to those artists ourselves. When a band reaches a certain level of popularity they become so culturally known that their very name has connotations attached to it that allow music writers to lazily use that name to symbolize their perceptions of the band, even if those preconceptions are absolutely bullshit. “But John-Michael” you ask yourself, “what does that have to do with Lil Wayne’s “Rebirth”?” Honestly? Everything.

The roar of people who didn’t know what to do with Lil Wayne’s self professed rock album started when singles like “Hot Revolver” and “Prom Queen” leaked, but didn’t truly reach their apex until the record landed on the internet in December. When people don’t know what to do with a record they pretend they do and, more damagingly, they pretend based on their preconceived notions of what they think they’re hearing. This has lead to reviewers for respected publications, publications I look up to as a writer, comparing “Rebirth” to bands like Linkin Park. Any article that says Lil Wayne’s “Rebirth” sounds anything like Linkin Park is written by someone who has never actually listened to a Linkin Park album. But that criticism has become part of the narrative of “Rebirth”s story, and I worry such laziness will inadvertently condemn “Rebirth” to being written off unfairly until kids finally discover it on their own years from now in bargain bins. Apparently hip-hop now has its own version of Jawbreaker’s “Dear You.”

So first off let’s clear the air, “Rebirth” is a rock album that features a heavy hip-hop influence, but it isn’t a rap rock album. It isn’t fucking nu-metal, and if you never listened to nu-metal beyond the Limp Bizkit songs you heard on the radio please kindly stop making this connection. The only connection between “Rebirth” and nu-metal is that each feature lots of power chords, but so does pretty much every major flavor of rock so this comparison is akin to saying Common and the Geto Boys sound the same because they both use programmed drums. “Rebirth” isn’t a perfect record by any means. At times it is downright awkward. Considering it’s the product of an evolutionary soup of cough syrup, what has to be literally tons of weed at this point, ego, and a creative desire to no longer be just the greatest rapper alive who can honestly say they’re surprised it’s uneven?

Yet uneven doesn’t mean bad. The album’s lead off track “American Star” could have easily fit anywhere on the “Carter III” even with its heavy blues guitar foundation. Wayne’s rapping isn’t as detailed as his mixtape work, perhaps in fear of overshadowing the music he had a hand in composing, but he’s still adept at playing both paranoid and playboy in his Auto-Tuned raps. “Prom Queen” takes the basics of one of rock and roll’s most treasured song types, the ballad, and filters it through the crushing drum and bass groove of hip-hop. In doing so it sets the theme for “Rebirth.” What happens when someone only knows enough about rock and roll to reproduce the basics of song structure and fills in the blanks with what they do know?

The answer strangely seems to be punk rock. “Rebirth” has moments of genius, and those moments almost always coincide with coupling fiery emotion with punk’s propulsive rhythm. People bitching about the lack of rap on the record apparently missed “Ground Zero,” which easily ranks among his finest material. The simplicity of its guitars is misleading as Wayne rides the pulsing wave with the kind of street preacher free associating lunacy that made so many love him in the first place.

“I know a girl named Crystal her last name Ball
I look into her eyes and I can see it all
I see it when she cry, I’m there when she call
Cause I live inside of the mirror on the wall
Kill ’em all, die in the spirit of the war
Thinkin what am I being spiritual for?
Huh shit, cause aint no love die while America drink your blood
It aint no hurricane it aint no flood
This some other shit we aint know of
Make that money yeah make that money!
Then watch the goverment take that money
But we gon’ raise hell, motherfucker get well
Laws get passed and economies fail
Love, hate, emotion, compulsion, addiction, fiction, virgins
Dixons, means, mixing, swinging , switching, swagging
Sweets, freets, faggots, flame, fashion, planes crashing.. ground zero”

“Ground Zero,” “Get a Life,” “Drop the World” featuring Eminem, “The Price Is Wrong,” hell even the Cars homage “On Fire” show if not the influence, then definitely a kindred spirit with punk’s early roots. The Ramones wrote sped up Phil Specter pop songs. Black Flag took heavy metal’s gravitas and took it in a direction that actually made it as dangerous as parents worried. Or how the jazz fusion band Mind Power mutated reggae with hardcore, leaving jazz behind and forming the Bad Brains. Only those bands developed out of sight, allowing their awkward early recordings time to mature, as opposed to having a multimillion dollar investment riding on the outcome of a dude who’s been teaching himself guitar for the last few years between recording several hundred songs, playing several hundred shows, and the general chaos of being one of hip-hop’s last true super stars.

The aforementioned “Drop the World” seems to address the criticism and pressure that comes with going in a different direction than the maddening crowd wants you.

“You keep the sunshine, save me the rain
I search but never find, hurt but never cry
I work and forever try, but I’m cursed, so never mind
And it’s worse, but better times seem further and beyond
The top gets higher the more that I climb
The spot gets smaller, and I get bigger
Tryna get into where I fit in, no room for a nigga
But soon for a nigga it be on, mother fucker
‘Cause all the bullshit, it made me strong, mother fucker
So I pick the world up and I’ma drop it on your fuckin’ head”

Wayne’s been called everything from a genius to a junkie, but for all his bravado his raps betray a sense of self doubt that few of his peers are ever willing to dive into. Want to see what he’s talking about when he says “the top gets higher the more I climb?” Just check out the gleeful reaction of the press when “Rebirth” didn’t sell a million its first week, as if a weird crossover experiment was ever going to bring out as many rap fans as the actual rap album they know is coming. For all his effort Wayne seems to know people aren’t going to see “Rebirth” for what it is rather than what its story is. Perhaps this is why he chose not to release it as a double disc with “The Carter IV” as originally planned.

With so few people who know what the stress of being a creative cash cow as well as artistic force in the hip-hop is like the inclusion of Eminem on “Drop the World” adds a fascinating layer to the song. Both artists really hit a national stage in 1998, but Em is a good ten years older than Wayne, who’s been part of a rap collective since he was child. The way these two have dealt with stress over the years seems rooted in their over twelve years in the game from completely different starting points, Wayne on a major at 15 and Eminem grinding at the underground’s glass ceiling until he popped out in Dre’s field of vision. Lil Wayne is known for acting out against those in positions of authority over him while Eminem’s years of hustling to build his name on his own find him folding into himself when faced with trouble. Despite their different lives Eminem might just be the one rapper on Wayne’s level willing to drop the shields for a moment and let you see the insecurity that drives him. His verse on “Drop the World” compliments Wayne’s by addressing the stress of a writer fighting the media narrative of his career. Eminem doesn’t want to be remembered as the best white rapper ever, he wants to be remembered as a classic rapper, just like Wayne wants to be remembered as a genius instead of the best rapper alive.

“Man, it feels like these walls are closing in
This roof is caving in, oops time to raise it then
Your days are numbered like pagers and
My book of rhymes, got ’em cookin’, boy
This crooked mind of mine got ’em all
Shook and scared to look in my eyes
I stole that fuckin’ clock
I took the time and I
Came up from behind
And pretty much snuck up
And butt-fucked this game up
Better be careful when you bring my name up
Fuck this fame, that ain’t what
I came to claim but the game
Ain’t gonna be the same on the day that I leave it
But I swear one way or another I’ma make these fuckin’ haters believe that
I swear to God, won’t spare the rod
I’m a man of my word, so your fuckin’ heads better nod”

The backlash against Lil Wayne was bound to happen eventually; after all you can only stay on top for so long. What’s surprising is that it’s “Rebirth” that caused it. Sure if people who went to see Lil Wayne live in the last year were denied the hits because he just wanted to rock out I could see it, but his work on a rock album lead to shows with a full backing band that added layers to his pre-existing hits. And you still got to hear “A Millie.” You’re still going to get “The Carter IV,” dude just took a pit stop to try something new. The fruits of that effort are a truly punk record. There are moments that don’t work in the construct of a rock song as it’s commonly known, but that make perfect sense if you’re building one without a lot of history as your blueprint. It still manages to have one of the best radio power pop songs in the last two years with “Knockout,” something the guys in bands like All Time Low haven’t been able to write with years of trying under their belts. Is it perfect? No, but its charm is in that imperfection. You wouldn’t laugh at a kid who fell of his bike when he was learning to ride it, but you’d be impressed as hell if you watched him ride for an hour and 3/4ths of the time he was riding the guy managed to pull off a back flip or wheelie, before falling on his ass. There are definitely scabs here, but it’s never boring watching Wayne fall down as he figures out rock n’ roll.