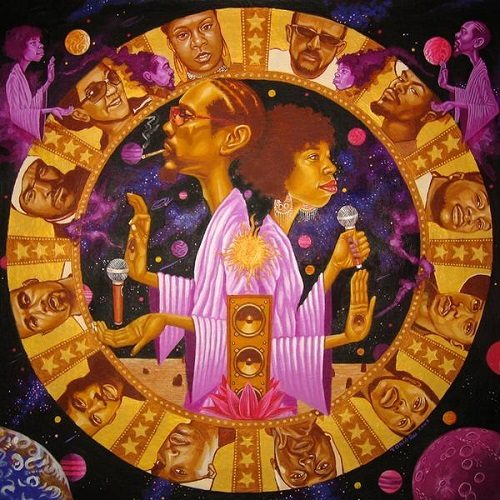 Based on past history we already know that Declaime and Georgia Anne Muldrow have “Beautiful Mindz,” even if that beauty can be as hard to comprehend as the mind of John Forbes Nash, Jr. Thankfully the two artists involved have a cult following both individually and collectively, so much like other demented rap geniuses (from those wearing metal masks to those with 20 alter egos) it’s not too much of a problem to keep their creative output flowing. Georgia gets every tag from “next generation Bahamadia” to “wannabe Erykah Badu” but the truth is neither fits – she’s a beguiling mixture of both and on her own shit to boot. Declaime a/k/a Dudley Perkins isn’t any easier to pin down – a raw hip-hop veteran since 1995 with ties to Tha Alkaholiks who sounds more like a lost member of Hieroglyphics. His work is as often critically acclaimed as it is hard to find at mainstream retail.

Combining forces should have taken this duo to bigger heights, but last time out Matt Jost was far more fascinated by 2012 conspiracies than their album. One can’t find fault with that given their producer DJ 2tall was more interested in “arthouse funk” than songs that could truly bump for the majority of hip-hop heads. This time however on “SomeOthaShip” the team has decided to keep their art IN house, with Ms. Muldrow handling most of the production herself, including the booming bass and whining Troutman-esque backdrop of the lead single “Endure” featuring M.E.D. and Rapper Big Pooh. As cool as the song is, I would have personally gone with the much more rugged “Heaven or Hell” with the surprising lineup of Black Milk, LMNO and Kool G. Rap. You may want to read that twice – I know I did before listening.

G. Rap: “This nigga cold blooded, somehow kids to hoes love it
Spot a bitch with potential, she like the diamond in the rough
Just dust off make her best-seller, like L. Ron Hubbard’s
Workin burden the bitch like heavy luggage
When I say strip they gladly strip, get a grip bitch
Let’s grab these chips, Caddy whip, yell this for Daddy Rich
Come on be daddy bitch”

Declaime and Muldrow are definitely on “SomeOthaShip” this time around, with surprising and interesting collaborations lurking around every corner. One moment it’s time to “Get Up” and go with a GoGo Mix featuring Organized legend Prince Po, the next it’s all about Miki Vale & Roc C on the lengthy song with equally lengthy title “Whatchallknowaboutthis.” The funny thing is that when Declaime and Muldrow let other people steer their ship, the results are just as interesting if not moreso than what Muldrow does on her own. The album’s funkiest songs are the Flying Lotus laced “Mages Sages II” and the Detroit to Cali boom bap provided by Black Milk for “Shine On” and “SomeOthaShip Connect Game” featuring Kazi.

Ripping or downloading the album for your portable music player of choice is a bit deceptive, as you may believe this is a 14 deep album jam packed with brand new material. In truth the 10 tracks which comprise the main part of this presentation are definitely interesting, but starting on the 11th joint things loop back around and the presentation is rounded out with remixes and instrumentals. That makes “SomeOthaShip” shorter than expected, which is a bit frustrating since it feels like it’s just not long enough to get the vibe that G&D are on. Declaime/Dudley is definitely the engine that powers this ship though, with no offense meant to Muldrow, because sometimes you just can’t feel her presence on the album and other times you wish she stayed in the background because she seems to be better suited to pulling the cosmic strings. The result of “SomeOthaShip” is more or less what the title implies – it’s definitely hip-hop that’s out there, but it’s not so far out that you can’t relate. Somewhere between “Beautiful Mindz” and this album is brilliance, but the ship’s still a little off course.