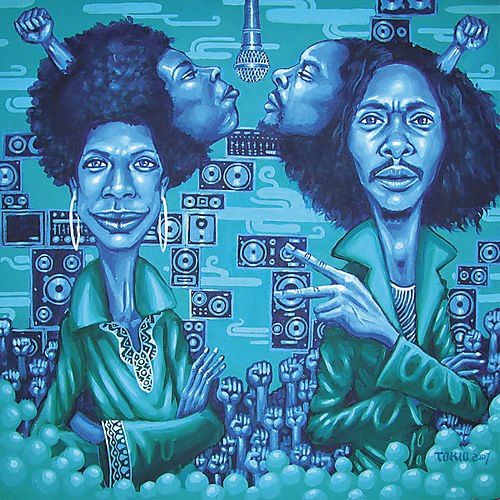 In “The Message Uni Versa,” Dudley Perkins has managed to do something that I have yet to see since joining this website: turn in a performance with absolutely no redeeming qualities. Perkins isn’t just bad, he’s absolutely terrible. Whether singing or rapping (although the singing is even less tolerable), Perkins’ performance here is completely stunning. He’s a terrible lyricist, an off-key, emotionless singer, and a humorist with no sense of humor.

Thankfully, Dudley is only half of G&D. Georgia Anne Muldrow is by far the more talented of the two, a decent singer, and very good producer. Vocally, she can’t make up for the mess that is Dudley Perkins, though her presence is always welcome, as is anything that takes Perkins out of the show. Neither of them are particularly great lyricists, but she doesn’t overextend her abilities the way Perkins does.

The first 12 songs of the album, with the exception of “GodUnit” are absolutely horrible. Perkins steals the show with his nonsensical lyrics, and even Muldrow’s performance on “Time” falls victim to sub par production. Muldrow produces every song on the album, and for this first half of the album, it seems to be a tremendous mistake. However, this is not as big a mistake as putting Perkins on the album in the first place, as becomes terribly obviously as he mumbles his way through “Good Morning Amerikkka”:

“So… take this… right here
Oops upside your head
Bomb blastin, now you’re dead
Boom bashin, shouts out to all my knotty dreads
Drink funk juice instead â€“ good for the head
And better for the health
Take that ice off before you melt yourself!”

After this, however, the amazing happens: “The Message Uni Versa” actually starts being good. This is entirely attributed to Muldrow’s beats. Starting with “War Drums,” every beat she makes is amazing, especially considering how mundane the first half of the album is. The entire album is fairly murky-sounding, but where the first half of it was just boring, the second half’s echoing piano notes and pulsating bass beats are fairly inspiring. Perkins even turns in an excellent solo performance in “Poppa’s Song.”

Even with the pick-up in its second half, “The Message Uni Versa” is a very bad album. With 9 of 20 songs beings skits, and the first half of the album being absolutely awful, there’s very little to recommend about it. Even the strong beats in the second half don’t completely hide the lyrical and vocal train wreck that is Dudley Perkins. “War Drums” and “Poppa’s Song” are both well worth a listen, but aside from that, there is very little here to recommend.