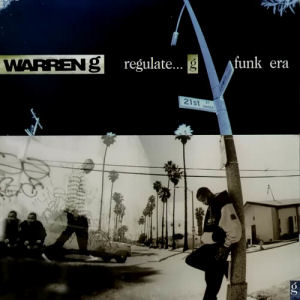 “G-Funk… where rhythm is life, and life is rhythm…”

If there was any doubt that the g-funk era was in full swing after “The Chronic” and “Doggystyle,” Warren G put an end to those suspicions with his tellingly-titled 1994 debut “Regulate… G-Funk Era.” A childhood friend of Snoop Dogg and Dr. Dre’s own stepbrother, the Long Beach native had already showed up on a few high-profile West Coast collaborations and even garnered a distribution deal with Def Jam for his upstart G-Funk Records. Then, of course, came the career-defining single that was “Regulate” from the “Above the Rim” soundtrack, and it was clear that Warren had made an indelible mark on the hip hop game.

With the aid of longtime pal Nate Dogg, Warren narrates a late-night tale of cruising Long Beach in search of “skirts,” complete with gambling, mugging, self-defense homicide, and a successful trip to the East Side Hotel. The real draw, though, is the sinister sample lifted from Michael McDonald’s “I Keep Forgettin’ (Whenever You’re Near)” and Nate’s haunting voice echoing over the cool, moody synths:

“If you know like I know, you don’t wanna step to this
It’s the g-funk era, funked out with a gangsta twist
If you smoke like I smoke, then you’re high like everyday
And if your ass is a busta, 213 will regulate”

With this four-bar avowal, Nate Dogg nails precisely what Long Beach and g-funk are all about. Warren and Nate are well-meaning, laidback cats, but they won’t hesitate to resort to drastic measures if threatened. They’re approachable, but you damn sure don’t want to rub them the wrong way. In any event, “Regulate” remains both Warren and Nate’s trademark, a timeless single that still dominates airwaves fifteen years later.

The album sufficiently develops this motif over a concise twelve tracks that clock in at just under thirty-eight minutes, and the approach and results are largely the same. Warren proves a master of laidback, feel-good music, utilizing an array of well-known soul samples, whiny, woozy synthesizers, and deep, slow-thumping bass. Simpler and more easy-going than Dre’s concurrent production, they’re far more happy than tough. Although he name-drops them plenty, neither Snoop nor Dre show up as guests. Instead, he enlists his own lineup of lesser-known Long Beach artists including Twinz, Da Five Footaz, Mr. Malik, and The Dove Shack. These MCs follow Warren’s blueprint and portray Long Beach as a place where the mean streets operate in sharp contrast to the sunny weather and picturesque scenery, and this dichotomy is sometimes reflected in the way the rugged lyrics complement the bright music.

Warren deftly handles his microphone duties with a conversational delivery. Neither a lyrical wizard nor a heavy flowing MC, he’s appealing because sometimes he just sounds like a normal guy talking to you: he rides a Schwinn, plays ball in the park, and seems genuinely worried about the dangers that await him after dark. A normal guy, that is, with some phenomenal beats behind him. He reminisces over the good old days, be it when he was a young kid, back in high school, or just last week on the strip. Warren’s all about good times and good music, and “Regulate… G-Funk Era” is chock-full of both. Take “Do You See,” for instance, a suitably vibe-heavy track where Warren takes the listener back:

“Another sunny day, another bright blue sky
Another day, another motherfucka die
These are the things I went through when I was growin’ up
There’s only one hood, and niggas shit be throwin’ up
And I knew it, there really ain’t nothin’ to it
Thinkin’ every fool’s gotta go through it
Now let’s go back (how far?) back in time
Draggin’ to these hookers tryin’ to mack for mine
I remember when we all used to stop at the spot
Back then my nigga’s name was Snoop Rock
It was all so clear
Eighty-seven, eighty-eight, then eighty-nine’s the year
You say ‘everywhere we roll, you can say we roll thick’
Way back then 213 was the click
Somethin’ to stay paid I was just a young hog
Warren G, Snoop Rock and Nate Dogg”

“Recognize” is a darker, bass-heavy collaboration with Twinz, with a slow-rolling beat and refreshing performances from all three rappers. It’s a simple and hugely effective track, dripping with West Coast attitude. Warren doesn’t even drop a verse on one of the album’s best tracks, “Super Soul Sis,” instead allowing Jah-Skillz of Da Five Footaz to bless the ebullient beat anchored by a sample from One Way’s “Don’t Stop (Ever Loving Me)”:

“Mister it’s the Masta Aces of the spade
Rappin’ skills are thinner than niggas on AIDS
Up up and away it’s the super soul sis
I talk so much shit I got halitosis
I knows this, I flows this, I’m funky, you stank
You a walkin’ blood bank, I whip y’all with my shank
Thanks for the memories, remember me no remedies
or end in the vicinity or catch a cap like a Kennedy
Cause I’m the Superwoman rapper, I deserve a hail
Chasin’ MCs, got em on the run like Smurfs from Azrael
No bluff, the magic I puff, I’m chokin’ sho’ nuff
I’m takin’ a bite out of rappers if my name was MC Negra
(She’s hotter than the Southland on fire)
All you MCs desire to run through my pyre
I’m turnin’ heads like the exorcist while flexin’ this
‘Cause it’s the super soul sis”

Who’s this girl? Hearing spunky punchline after punchline on Jah-Skillz’ three verses, one would mistakenly think a successful career awaited her. The more upbeat “So Many Ways” is highlighted by a bright synth-laden chorus and winding bassline, making for pure, joyful summertime listening. The infamous single “This DJ” is undeniably infectious, with a woozy, swirling synth line and twangy bass arrangement. Between his unforgettable hook, Warren just sounds happy to be on the mic to accompany such a wonderful beat:

“Verse two, now what the fuck I do?
Catch the bus to Cal State, or chill with the Voltron crew
and make a few ends on the side
Here comes a baby blue van, time to ride
So I hops in the van with my nigga Tick
And Baby Poppa, back then, that was my click
We groovin’ to Santa Ana
and we plan to, make a hellafied ‘mount of money
And what I did for extra fees
was break niggas after work playin’ get like me
I was fourteen years old, havin’ a sack
Just a young motherfucker eatin’ value packs
Shootin’ dice in the corners of the public schools
And I used to gangbang, but now it’s a G thang
And I still know how to make those ends
You don’t believe me, go ask the Twinz motherfucker”

The last gem to be found on the tracklist is the warm-weather anthem “This is the Shack.” Warren doesn’t rock the mic on this track either, leaving those duties to The Dove Shack, who paint a profile of a chilled-out party spot for the listener. Two Scoop and C-Knight seem to want nothing other than to portray the g-funk lifestyle in two verses, and BoRoc impresses as a legitimate stand-in for Nate Dogg with his deep, soulful voice. The beat is fitted with a funky guitar cadence, and as Warren’s squeaky, distorted alter-ego “The G-Child” chimes in with his ad-libs at the end, the listener will probably remark that the song is just as quirky as it is irresistible.

The final three tracks occupy much the same territory as their predecessors, albeit with fewer memorable moments, using more familiar samples; it doesn’t sound like quite as much precision went into the engineering of these tracks. Be it a simple mistake or a misguided effort to show how off-the-dome his performance was, Warren actually misspells “next” “N-X-E-T” on the Mr. Malik freestyle duet “What’s Next.” “And Ya Don’t Stop” is predictable West Coast fare, and the closer “Runnin’ Wit No Breaks” throws Jah-Skillz, BoRoc, and both Twinz over a popular Les McCann and Eddie Harris sample. None of these are bad songs by any stretch of the imagination, but they’re not quite as substantial as the timeless anthems that come before. Perhaps in an attempt to flesh out the still-short running time, there are a few worthless skits of standard gangsta rap clichÃ©s, but at a fast thirty-eight minutes it still can feel like an EP.

“Regulate… G-Funk Era” is one of those albums for which a numerical score doesn’t capture its significance. Warren isn’t the dynamic character that his more infamous pals are, nor does he aim to be; his debut is intended to be a simple, feel-good pleasure, and he doesn’t even rap at all on some of the best songs. Still, it was a hugely influential album for the legions of California spitters that would follow, and a quintessential summer listen regardless of which coast you fall under. Better yet, it’s aged really well, and few albums of any genre have done a better job epitomizing the sunny, laidback Cali lifestyle. Simple in concept but brilliant in execution, what Warren lacks in lyrical dexterity he makes up for in pure charisma and the fact that he’s just so darn likable. But more than anything else, the beats are simply irresistible and ensured that the g-funk sound was here to stay.