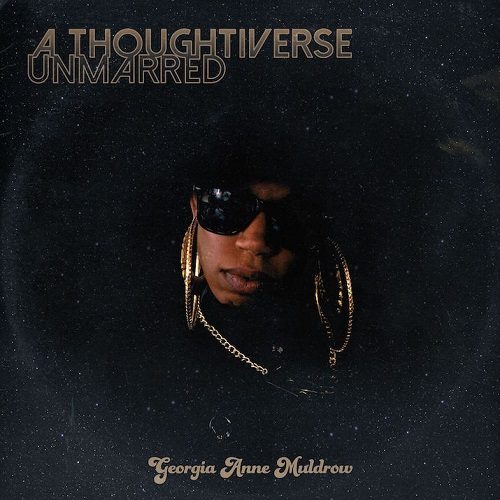 I’ve been wanting to check out singer/producer Georgia Anne Muldrow ever since her debut EP came out on Stones Throw in 2006. Since then she’s released fifteen albums, including a 2012 collaboration with Madlib, “Seeds.” I finally decided to catch up with her on her latest release, “A Thoughtiverse Unmarred.”

I know Muldrow for her beautiful voice and soulful production, so I was a bit thrown to hear her rapping on “A Thoughtiverse Unmarred.” She describes the album as her first full-length rap album on her Facebook page. She said in an interview that her husband and musical partner Dudley Perkins pushed her to do an entire album rapping.

Let’s start with the positive: Musically, “Thoughtiverse” sounds great. It has a funky, soulful vibe that is similar to that of Erykah Badu. The beats combine 70s soul with hip-hop.”Monoculture” adds a reggae spin, and “The Outcome” sounds like vintage RZA.

Lyrically “Thougthiverse” fits in with the current wave of hip-hop/soul protest music that includes D’Angelo and Kendrick Lamar’s latest albums. In the wake of the killings of Eric Garner, Michael Brown, and Freddie Gray, there has been a lot of soul searching in the African-American community about what it means to be black in America today, and what the community can do to fight against the systemic poverty, police abuse, and violence that so many African-Americans face today. Muldrow taps into this feeling of despairing hopefulness, addressing the challenges that many in her community face. A lot of the message of “Thoughtiverse,” both in terms of the lyrics and the samples between songs, is that things are as bad as they are because people in power want it that way. On “Pop Iconz” she raps:

She complains about how having a black president hasn’t helped African-Americans on “Child Shot”:

The overall message of the album is “THEY are screwing us over, so it is up to US to fight against it and not become what they want us to be.” It reminded me of something Reverend Willis Johnson said during the Ferguson protests: “…Give us the strength… to be courageous enough not to do what they expect us to do.” It’s a great message: that it isn’t your fault that you are where you are, and that you have the ability to change course.

Musically and lyrically, “A Thoughtiverse Unmarred” is a powerful album. So why is it getting such a mediocre review? The answer lies in the fact that this is Muldrow’s first rap album. To be blunt, she’s an amateur and she sounds like it. She stuffs her bars with too many syllables, she struggles with breath control, she’s often flat, she struggles with getting the cadence of her rhymes right. In short, she sounds like someone who just started rapping and is struggling with how hard it is. On top of that, the recording of the vocals is off on this album. Different verses sound like they were recorded in very different recording sessions, the volume is off, and it often sounds like a demo rather than a completed album. I think one of the reasons why Muldrow has released 15 albums in 9 years is that she has a quick and dirty recording style, but “Thoughtiverse” would have benefited from being more fully baked. As is, it has potential, but is hard to fully recommend.