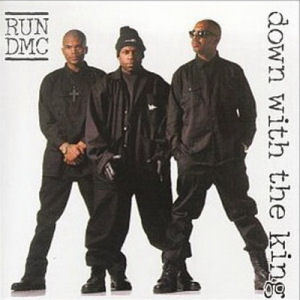 Coming off 1990’s slow-selling “Back From Hell,” the Hollis Crew saw need for a change in order to keep up with a hip hop world that no doubt appeared to be hurtling forward faster than the speed of sound. But by 1993, the cards seemed to be stacked against them. The first years of the 1990s were filled with legal troubles, health issues, car accidents, and alcohol abuse for the group. Run and D soon became vocal Christians, and Jam Master Jay founded his own record imprint and struck gold producing Onyx. Fearing the worst, Arista even put out the group’s first greatest hits collection. Having cemented legacies as founding fathers and invaluable contributors to a worldwide cultural phenomenon, it looked as if the time had come for Run-D.M.C. to gracefully bow.

Not so fast. Rumblings of an unlikely comeback had been circulating for a few months, and the rumors materialized in the spring with a 15-track LP. On “Down with the King,” Run-D.M.C. ditched the thick glasses and gold rope chains and enlisted the best and brightest stars the East Coast had to offer in 1993. The trio had, in some way, influenced all of these artists, and now it appeared their turn to return the favor. The lead single, a collaboration with Pete Rock & C.L. Smooth, featured Pete’s hardest-hitting beat to date, a dark, bass-heavy trunk-rattler with vocal bites reminiscent of a horror film, and a hook sampling DMC’s own verse from the group’s classic “Run’s House.” DMC’s angry verse positioned their return as one for the ages:

“I’m takin’ the tours, I’m wreckin’ the land
I keep it hardcore ’cause it’s dope, man
These are the roughest toughest words I ever wrote down
Not mean for a hoe like a slow jam, check it
Sucka emcees could never swing with D
Because of all the things that I bring with me
Only G-O-D could be a king to me
And if the G-O-D be in me, then the king I be
The microphone is granted when it’s handed to me
I was planted on this planet and I plan to emcee
The MC fiends only seem to agree
That I rock all the world and the society
Outrageous on the stages with a tune of verse
I get praises from these pages to the universe
My voice is raw, my lyrics is law
I keep it hardcore like you never saw, you wannabe…”

That’s right, folks, Run-D.M.C. was back, and this time they had a chip on their shoulders. While it certainly wasn’t your daddy’s Run-D.M.C., “Down with the King” was one of the most invigorating tracks of their catalog, and the heavily-aired music video featured cameos from Das EFX, PM Dawn, Naughty By Nature, KRS-One, EPMD, A Tribe Called Quest, Jermaine Dupri, Onyx, Salt-N-Pepa, Kid Capri, Kris Kross, Redman, and the late Eazy-E. If these guys were still “Down with the King,” who wouldn’t want to be?

“Down with the King” features a harder, more rugged Hollis Crew than any prior effort, and many of the songs take nods from Onyx and Naughty By Nature. They curse just infrequently enough to avoid an advisory label, and most of the beats are rumbling, bass-thumping numbers provided by infamous producers. Making frequent but subtle nods to their newfound spirituality, they’re standing in the present but looking back at a decade of accomplishments. It’s an inspiring performance from rappers pushing 30â€”although it’s harder than previous efforts and features more collaboration, little feels forced.

Even with a fresher sound, there are elements that will quickly bring to mind the classic ’80s LPs. Over a Q-Tip beat with a reverberating trumpet line and heavy bass, “Come On Everybody” chronicles the decade-long journey of Run, DMC, and Jam Master Jay with familiar back-and-forth verses between Run and D. Still sporting commanding deliveries and potent rhymes, they were out to prove not only that they could hang with a new generation of the rappers they influenced, but that they could still reign supreme.

Despite the numerous outside producers, Jam Master Jay deftly handles his DJ duties, providing extensive cuts, scratches, and mixing to each song. He’s credited as producer of four tracks, including the jazzy Onyx collabo “Get Open,” and he even raps on three of songs. Check him on the EPMD production “Can I Get It, Yo”:

“My name is Jay, the Jam Master, gettin’ loose
Tupac had some, but now I got the juice
I’m gettin stupid, you wonder why I’m ill
‘Cause I’ve been around, and still got these skills
(One) two, mic check, gettin’ wreck
A real street nigga, so yo show respect
I make you wanna (jump jump) around wicked
Run-D.M.C., and Jam Master kickin’ it
With the flow that’s slow cause I’m good to go
Still rock a show, gettin’ dough, and ayo (ayo)
Straight from Hollis, Queens, yeah you heard me
(Jay) Peace, arrivederci”

Okay, so Jay’s not exactly dropping science here, but heck, it’s JMJâ€”with all respect due to a fallen legend, there was probably a reason his career was based behind turntables and not microphones.

KayGee’s production “Hit ‘Em Hard” sounds like it came straight off “19 Naughty III,” and the Bomb Squad laces “3 in the Head” and “Ooh, Whatcha Gonna Do,” the latter resulting in an upbeat, spirited number from the Hollis Crew. A young Jermaine Dupri provides the rugged track on “Can I Get a Witness.”

Run-D.M.C. even makes sure to incorporate the rock element that took them to the top of the charts in the mid-80s. “Big Willie” features none other than Rage Against the Machine’s Tom Morello, who lends a heavy guitar riff and soaring solo. Run and DMC each have two mean verses, including Run’s livid second:

“I gotta come my name is Run and me and D we been appointed
I’m ever so clever you never touch the anointed
I’m born again I got a friend the Lord I rearrange
But other than that I’m livin’ fat and ain’t nothin’ changed
Big Willie still in your grilly, you better block son
I bust you up and then I blast you with my bop gun
A million times rhyme risin’ to the prime
While another nigga’s cuts get bucks, like it’s a dope rhyme
Bein’ said I’d rather leave another brother dead
Cause yet another brother deaded from the slow dread
I’m makin’ papers, brothers catchin’ vapors
Try to lick shot, you get got, catch you later
This ain’t The Cosby Show you know what it’s like, A Different World
We’re livin’ inside a world where you get the cash, you hit the girl
So check the hypeness, I’m not livin’ like this
I’m the type of guy to bust your eye, you lose your whiteness
You comin’ butt when you wish upon a star
But I could never be butt, so yo, bust the guitar!”

The song’s got a great outro and just might be the best track on the album, featuring inspired-sounding rhymes and excellent production.

They also pay homage to “King of Rock” with a rap-reggae fusion reminiscent of the Yellowman collaboration “Roots, Rap, Reggae.” “What’s Next” features reggae flavor-of-the-month Mad Cobra and sounds like a legitimate sequel to “Flex,” albeit with some quality Run-D.M.C. styling. The tracklist contains highlights through the end; Pete Rock’s final contribution, the mean “Wreck Shop,” features a monster of a trumpet sample.

Nowadays we don’t bat an eye at a rap act that hangs around ten years, but in ’93, ten years was the longest tenure in hip hop history and was nothing short of monumental. For a crew that started rocking parties in Queens to make a career selling albums as bona fide rock stars was not just a testament to the group, but also a testament to their vision and the magic of the music itself. “Down with the King” is in this sense a celebration of past glory, but it’s also a convincing declaration that they can still hang and, indeed, supply some heavy, quality rap tunes for a new generation. On the outro “For 10 Years,” Run and DMC seem content with their status after a decade of recording:

“For the past decade, for the past ten years
Many reps were made, many debts were paid
Some crews paid dues, while others refused to lose
And that’s aaaaallllllll good news…”

Some elements of “Down with the King” do feel like a contrived effort from aging vets struggling to keep up: Run employs the periodic “-iggity” suffix a la Das EFX, and the lyrics leave little doubt that it’s meant to be a “comeback” record. What’s surprising, though, is how much of it really works. The beats may not be what you’d expect on a Run-D.M.C. album, but there’s not a weak one in the bunch, and D and Run shine with all the style, attitude, charisma, and chemistry that made them household names. Against tall odds, “Down with the King” debuted at the top of Billboard’s R&B/Hip Hop chart, unseating a certain album called “The Chronic,” and was subsequently certified gold. Although they would fade into inactivity in the years that followed, for the time being at least Run-D.M.C. proved that they could still hang with the best and that, for the foreseeable future, they’d maintain their title as King of Rock.

Run-D.M.C. :: Down with the King
7Overall Score
Music7
Lyrics7