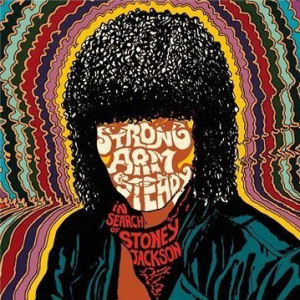 The initial idea behind Strong Arm Steady was to create a movement of MC’s who wouldn’t conform to industry stereotypes. Regardless of whether that notion was called for or not, or its implementation successful or not, the set-up of SAS remains the same. The core members seem to have been reduced to Phil Da Agony and Krondon, but other Strong Armers were readily available, among them Mitchy Slick, even tough he was expected to be a more active member. Think of them as a loose collective that reps the West Coast without any prefix to their brand of rap. Chace Infinite and Planet Asia each make several appearances, but the album also features out-of-towners Phonte, Talib Kweli, and Guilty Simpson, as well as West Coast fixtures and newcomers from Sick Jacken to Fashawn.

But none of these individuals are the selling point that the album’s producer is. Madlib did all the music, with J Rocc acting as the broker who auditioned some 200 beats from the Beat Konducta’s library to the rappers. The result is 50 minutes that manage to balance the natural inclinations of those involved. Prepare for capricious programming with the interruptions and interferences that come with Madlib productions. But you can also look forward to quirky loops, obstinate rhythms, and soulful harmonies. Especially soul is the main ingredient of the first half of “In Search of Stoney Jackson,” starting with the softly chiming “Best of Times” and ending with the rawboned, bare soul of “New Love.”

And who could pass up the particular soul food served up on “Chittlins & Pepsi,” their ode to health-conscious women? This joint would have been so at home on Kenny Segal’s “Ken Can Cook.” We find Planet Asia scouting Trader Joe’s and Berkeley Bowl for clean-eating chicks anxious to buy free-range chicken, and even pointing out potential effects on female fertility. But it’s Phil Da Agony who takes the (whole-wheat) cake:

“I ain’t fuckin’ with them chittlins
the most I’ma do is chicken
Bad food’ll have your breath kickin’
Try a diet like Russell Simmons
Datin’ vegetarian/vegan women drinkin’ water with lemons
[…]
Stay away from the Ball Park Franks
You pullin’ all that rank
and wholefood’s puttin’ fuel in your tank
[…]
We don’t waste food on the plate
Let the haters hate – 12-ounce steak, asparagus tips
Delicious, got me lickin’ my lips on some L.L. Cool J shit
No rib tips, we take tips from the best Chefs like Raekwon
Now pass the Grey Poupon
No MSG, no butter on my popcorn
This ain’t a pop song”

As an afterthought, on the short “Smile” Phil compliments a woman on her dental hygiene, ironically over a helping of dusty old soul. “Cheeba Cheeba” meanwhile is inspired by a substance whose effects on health are contentious, the two rappers riding on a maybe not lyrical but at least natural high.

Phil and Krondon complement each other well vocally, the former flinging out phrases at high volume, while the latter possesses a more complex rhyme structure and a more introverted flow. Krondon is especially at home under the darkly hollow grooves of “Questions,” which finds him kicking science alongside Planet Asia and Fashawn. Phil Da Agony is simultaneously more focused and carefree than his partner in rhyme, brainstorming a potential “top 5 dead or alive” on “Bark Like a Dog” and ending up rattling off a who’s who of rap icons. He also has the strongest verse on the Kweli-featuring single “Get Started”:

“Watchin’ niggas go Rove like Republicans
I’m really not into clubbin’, I’m into writin’ raps smotherin’
coverin’ all bets, you could always bet on the best
It’s like butter, baby, Tribe Called Quest
If you can entertain ’em like Doug Fresh or Finesse & Synquis
then you can get your money, bee, Mos Def
But it ain’t all about gettin’ a check
just get it off of your chest
Before you earn a dollar, earn the respect
Then you can get your net profit up
If they come up short, you can tell ’em cough it up
Now you bossin’ up, but not on us
I play the cut like Neosporin
then hit the road tourin’ when shit get borin’
Put excitement in your life, precise words spoken through the mic
provokin’ you to be cold as ice
Now roll the dice, Blacksmith, Madlib, Steady, Kweli
we on the grind, stickin’ punchlines like Ali”

The strength of this record, however, lies in the fact that you have many different characters passing over Madlib beats. There’s Regime veteran Phats Bossi rapping over howling ’60s guitars on “Bark Like a Dog,” longtime Cypress Hill companion Sick Jacken on a track (“Pressure”) reminiscent of Dilla and Madlib’s “Champion Sound” album, Phil Da Agony, Montage One, Evidence, Oh No and Roc C on the playful string suite “True Champs,” Krondon crooning for the charismatic trio of Chace Infinite, Phil, and Tri-State on the broken beat for “New Love,” Roscoe and Guilty Simpson breaking the wild horse that is “Needle in the Haystack,” Asia, Chace and Kron training to Ag’s hook instructions over the Wu-Tang-inspired “Ambassadors,” or Mitchy Slick bringing his San Diego gangsta twang to the wonderfully weirdly hymnic “Two Pistols.”

If it was Krondon and Phil Da Agony’s intent to establish themselves as Strong Arm Steady the duo, “In Search of Stoney Jackson” can only be considered a failure. A lot of the time they get lost among experienced guest rappers and headstrong beats. The way Phonte relates to the beat with relevant rhymes on “Best of Times” while the two struggle to come up with anything cohesive is close to embarrassing. Then again both can be considered congenial colleagues of Madlib who take the same freethinking approach to rapping as he does to beatmaking.

It doesn’t sound like much upon first listen. But after a few spins “In Search of Stoney Jackson” becomes a charming little record that has quite a lot to offer despite its fragmented, uncoordinated appearance. When Krondon claims that they “bring the sound of J Dilla back on Madlib tracks,” he might actually not be far off the mark.