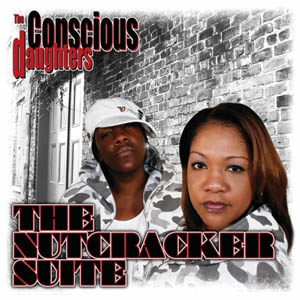 The Conscious Daughters :: The Nutcracker Suite

Rappers often have the urge to let you know that ain’t a damn thing changed. There’s a variety of them who proudly refer to their earlier works by incorporating the adverbstill into a previous album title. Nas had “Stillmatic,” Smif-N-Wessun “Still Shinin,” Fat Joe “JOSE (Jealous Ones Still Envy),” Pitbull “Money Is Still A Major Issue,” Big Mike “Still Serious,” and Trina “Still Da Baddest.” Numerical sequels are popular as well. “The Chronic 2001,” “The Blueprint 2” and “3,” “Under Construction Part II,” “Tha Carter II” and “III,” “Bacdafucup Part II,” “My Homies Part 2,” “Only Built For Cuban Linx… Pt. II.” Last year’s “Jealous Ones Still Envy 2” arguably took it to absurd levels.

Needless to say, these reassuring names are just as often marketing gimmicks as they are artistic mottos. The Conscious Daughters don’t need a throwback album title to pick up where they left off. Which was only 13 years ago. “The Nutcracker Suite” is their long answer to Nas’ question “Where Are They Now?” The short answer was given by CMG on the ‘West Coast Remix’ to that very same song. So where they at? They’re still signed to Paris’ label and still reside in this “little city by the Bay.” “That’s where I stay / that’s where I play / everyday in the O-a-k,” as Special One puts it in the opening “Not Bad But Good.”

For better or for worse, there really ain’t a damn thing changed for Special One and CMG. They are the same bossy broads rapping over Bay beats. The voices, the flows, the skills, the topics, it’s all preserved. Even the color scheme of the album artwork recalls their 1993 debut “Ear to the Street.” In the tradition of “Somethin’ to Ride To (Fonky Expedition)” and “Strikin’,” “Not Bad But Good” is yet another riding anthem. Those familiar with TCD can definitely prepare for a blast from the past. Luckily, traditional Bay Area rap has a timeless appeal, making it easier for new fans to get on at this point.

As usual, TCD juggle multiple roles in their raps – responsible relative, battle rapper, thug mistress, homegirl, abused wife… The Rick Rock-produced “Dirty Little Secret” recalls happy days early in the relationship, but soon enough the woman realizes she’s sleeping with the enemy: “Soon came the arguments and all kind of problems / cause besides makin’ love we had nothin’ in common / To this day I swear to God I never seen this one comin’ / when I got my first ass-whooppin’ from him for nothin’.” It wouldn’t be a TCD song without them taking appropriate action. “Don’t You Ever” is a pensive Paris production where introspection results in a “Keep Your Head Up”-type message, Special One’s closing statement “Don’t ever let ’em tell you nothin’ or believe that you can’t / We put the strong black woman back on hip-hop’s map” echoed by a Sister Souljah quote closing out the song.

The airy, acoustic “Woman’s World” is one of three collaborations with fellow Oakland vocalist Mystic. With its R&B touch and clear message of encouragement and empowerment, this may just be TCD’s most conciliatory offering yet, with both Daughters displaying a softer side. Special One: “Damn it feels good to be a female and just be able, y’all, to create life / and maybe one day love a man and be his wife.” Another musically moderate track is “Issues.” Meanwhile the lyrics are anything but: “Young black males overcrowd the jails / while terrorist Bush is weighin’ dope on the scales / teenage moms droppin’ babies like bombs / What the fuck’s changed since we caught Saddam?” “Raid” finds them towing the line with Guerrilla Funkateers Paris and T-KASH over a typically march-stepping beat.

The Black Panther of Hip-Hop leaves his prints on several other tracks – reprising his role as musical and executive producer. The Run-D.M.C.-sampling “Not Bad But Good” undergoes beat changes similarly to 1993’s opener “Princess of Poetry,” something rap practices all too rarely. But they are also wise enough to invite guest producers. Steven King definitely deserves a mention for providing the hard drums and key stabs for “Freak the Beat,” the dizzying synth swirls for “Grimey,” and the slick, hard thumps for “Victory Lap.” One Drop Scott provides them with a soothing, nocturnal beat for “A Moment in Rhyme,” a Mystic-assisted meditation on music. “Town Biddness” sees them travelling to Southern California to hook up with Broadway, importing a heavy dose of cutthroat lyricism into LA. Especially CMG can get worked up when it comes to proving her rap credentials: “I spit streams of liquid cream and thick-ass flows / drop hoes with single blows and lyrical overthrows.”

As mentioned, historically TCD don’t bring anything new to the table. But we have to consider what others presently bring to it, and from that perspective they are just about the only female rap crew with any kind of standing in the industry. Promoting “female vocalism,” they are joined by fellow Bay vet Marvaless on “Go Hard in CA,” deceased local artist Goldee the Murderist on “Freak the Beat,” and Mystic on “Thug Love.” The situation of women in rap addresses “Victory Lap” rather bluntly, presenting TCD as “iconic hitters, female representers,” “women with a purpose,” “West Coast boss bitches,” “hip-hop saviors” and “the women to beat” while Special One has this to say about competition:

“Bitch, put your clothes on
Spoon-fed chickenheads and hoes get your strolls on
Peter Piper dicked them bitches, gave ’em a shot
I guess the only way they play is fuck they way to the top
Cocksucker, dickjuggler, touched ’em all for a verse
See, I thought you was a rapper but the women got worse
Potential queens I see up in this industry are a joke
they puttin’ sex before the music goin’ out like some hoes”

“Victory Lap” being flanked by “Friends” and “Let’s Party,” however, “The Nutcracker Suite” overall is an inclusive affair, also devoid of any strong anti-male sentiments the album title might suggest. Special One calls it their best record to date. Be that as it may, the point is this: albums like this are usually from a distant past, with “The Nutcracker Suite” you get one that was only released last year.