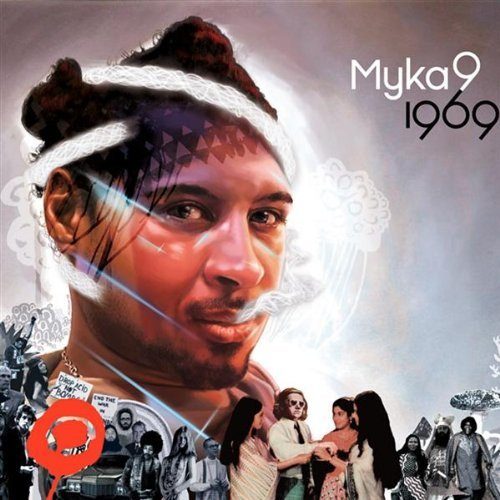 Myka 9 (or Myka Nyne, Mikah 9, Mikah Nine depending on the album) is the rare hip hop figure considered a legend in some circles and an odd novelty in others; although his creative talent is rarely disputed, to label him an acquired taste would be an understatement. Coming into prominence as a member of Los Angeles’ seminal collective Freestyle Fellowship, he impressed with mind-bending flows and rapid-fire free-association verses heady enough to make even the passing listener break out his dictionary on their early opuses “To Whom It May Concernâ€¦” and “Innercity Griots.” Far from one-dimensional, he also provided substance with his insight into the paradoxes of urban living and poignant narratives concerning his experience with homelessness. Largely sticking with the Project Blowed family for his career spanning two decades to date, he went on to record as a member of Haiku D’Etat and Magic Heart Genies while also compiling a significant solo catalog through the new millennium.

Myka’s contributed to a few masterworks over the years, and along with his frequent collaborator Aceyalone defied hip hop conventions by employing the approaches of improvisational jazz and scat into recordings. While not widely accessible by any means, Myka ensured that his listeners would know him as more than a rapper, but a “griot” in the way he originally intended: an artist, storyteller, and entertainer in the oldest and purest sense.

Myka’s always experimented with singing, but as he transitioned to a solo artist what began as a bit of a sideshow evolved into his signature delivery. His flow is fast, breathy, and eerily monotone, but melodic enough that some might liken it more to singing than rapping. It’s an abstract sound for sure, but not an unappealing one, and on his solo releases he’s engineered it to a laidback canter resulting in a sunny California vibe when combined with soulful beats. Still, it did prove somewhat divisive among listeners, and even my RapReviews colleagues for that matter: Steve “Flash” Juon has called him “either an eccentric genius or just too weird for you to dig,” Guido Stern labeled a release “too bizarre to fully embrace, yet too daring to disregard,” and in his pan of 2006’s “The Citrus Circuit Vol. 1,” Matt Tomer likened him to a “one-eyed imp” who destroyed the “gorgeous landscapes” his beats provided. For objectivity’s sake, I’ll admit that I consider myself a Myka 9 fan, but that’s not always the case by any stretch of the imagination. For lack of a better word, Myka 9’s music is so darn weird from both a musical and lyrical perspective that a lot of the time it’s just impossible to relate to.

Myka kicked off a busy 2009 during which he recorded albums with Terminus and Magic Heart Genies with his fifth full-length solo effort. “1969” is named after the year of his birth, and some of his lyrics channel the creative spirit of the era, relating his own childhood memories and the world events of those years. Still, you can rest assured that no one will mistake it for a ’60s record, because there’s enough abstract lyricism and mind-numbing rhyme schemes to go around.

Myka tends to bring his best when his production is strongest, and “1969” is produced entirely by Canadian producer Factor. Factor also evokes some nostalgic sentiments, lacing his sturdy beats with funky guitars, bass, horns, and percussion. There’s no doubt it’s Myka’s show, but these beats are endlessly solid and on the best songs the two exhibit a chemistry such that it sounds like they’re almost on the same page, which is no small feat by any means.

“Real Song” is the opener, a serious and soul-baring piece on which Myka sounds desperate and restless as he frantically raps about personal struggle. The trumpet driven “Inner Knowing” is less heated, as he coolly raps about positive thinking and peace of mind:

“Kindness infinity, all the remedies are within me
Operating on a hunch, utilizing a certain feeling
Turn down brain chatter from mental floor to ceiling and attic
Use your intellect, it’s all mind over matter”

“Drummer, gimme some o’ that double clutch, kick, snare, high hat
That’s right Jack, I’m stayin’ where I’m at, don’t fight back
This is not a threat, it’s an open invitation to come work up a sweat
Now my shirt gettin’ wet, and her skirt gettin’ hiked up
And all I heard was people sayin’ ‘Watch yourself, Myka’
I’m like uh, mind your own business
Me and this missus ain’t doin’ this just for physical fitness
It’s a love thing, with the kiss and hug, ring
Round her finger with the wedding singer and the trust, it’s above game”

“Snake Bite” is an impressive showcase with a likably anxious beat, and the driving “To the Sky” features one of Factor’s catchiest productions. Both Myka and Aceyalone shine as they trade rhymes on “Options,” bearing the fruits of twenty years of collaboration.

The standout is “Cadillac Nights,” a cool, moody gem of a track with a steady drumbeat, glimmering piano keys, twangy guitars, and an uneasy organ with a cleverly arranged chorus built around a mumbling singer. Myka paints a vivid setting of summer evenings spent in GM sedans using a slow, unrhyming spoken-word drawl:

“Most of my friends and I have a strong affection for an automobile known as the Cadillac. And many nights we’d hang out talking about which one we wanted. We’d go on speaking about these classic land yachts from days before we were born up to the modern era. It’d be two, three, four o’ clock in the morning, cruisin’ up and down any late-night street chasing action and adventure among other pursuits, like some soulful speakeasy, or a club to cut loose. My first time drivin’ one was my mama’s 1969, and it had some pretty big shark fins on the rear fenders, gangsta whitewalls with some fuzzy dice in the four-door Brougham. Can’t forget the eight track player, with all those bulky cartridges. My next one comin’ up was in a 1972 Eldo where my first girlfriend put me off with the scent of her hands, rollin’ a poorly manicured blunt over cushioned upholstery. Later on in life I discovered the status symbol of the Caddy for Daddy Brutality. Big boss playas, weddings, funerals, or even renting one for a hot Saturday night with some friends.”

Halfway through the second verse, he trades in the spoken-word for his usual rapid sing-song before reverting back to the spoken-word. This song most successfully executes the 1969 theme, but besides that it’s a gorgeously evocative, expressive, and artistic piece of music. The track is a piece of creative genius and finds Myka at his inventive best.

“91 Octane” featuring Awol One and Gel Roc is a funny song about gas prices that feels like it was recorded in a cloud of haze. The excellent “Monte Carlo” chronicles a lavish trip through Europe, with a great beat and smart hook.

The second half of the tracklist gets very abstract and per usual there are tracks that are just too tough to get into. If you think Myka’s an acquired taste, Busdriver’s even more so, and you’ll probably want to skip their duet “Chopper.” “Elevated” showcases some interesting lyrical schemes but is forgettable between the awful “Liberty,” where he wanders into falsetto, and the strange “Good Old Smokey (My Kanine).” Worst of all is “Hand Bone,” which sounds like a goofy, ultra-repetitive children’s hand game.

The record closes with the smoky title track, a listed venture through the era of Myka 9’s childhood. A haunting hook and uneasy chord progression supplement his echoing rhymes:

“Ska and reggae with the bud-ism
Good ism, it’s a space oddity with David Bowie, listen
With the mushrooms, the terrorists, what can it do
The nudist colonies, never fearin’ interludes
Civil rights and peyote
And the play called Hair where we would notice the lonely
Women’s rights, Volkswagen buses
Bra burnin’, militant discussions
Faithful Grateful Dead and ganja
Crystal energies, something strong for the head, and
Lots of drugs, gurus and rainbows
San Francisco, styles of art to explore
Haight-Ashbury, Venice Beach
Janice Joplin, Aldus Huxley, LSD, free speech
Timothy Leary, doors of perception are appearing”

“1969” does nothing to shake Myka’s status as one of the weirdest rappers to rock a mic, but it also sustains his place as an innovator and visionary of alternative West Coast rap. With a loose concept, Myka and Factor explore new, interesting territory and exhibit a chemistry that might warrant even further collaboration. “1969” is for the most part an entertaining, engaging listen and is Myka’s most personal, expressive work in years.