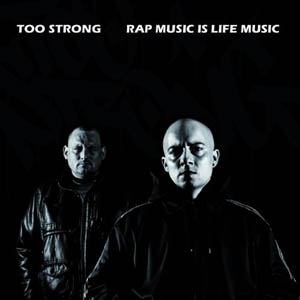 If you’re somewhat intrigued by the prospect of an album entitled “Rap Music Is Life Music” by a rap act called Too Strong, I have to disappoint you, the predominant language on it is not English. Too Strong are veterans of the German rap scene, going back to the days when the pioneering crews had English names, and, in cases like Too Strong’s, were also rapping in English. Having formed in 1989, it took Too Strong some years to release material, but since their ’93 debut EP they built a continual discography with full-length releases in ’94, ’96, ’99, ’01, ’05 and ’09. Even after longtime member DJ Funky Chris left, the repeatedly regrouping and reuniting Too Strong continue as a duo.

Too Strong always positioned themselves as defenders of the hip-hop underworld and outsiders to the hip-hop mainstream, representing the Ruhrgebiet, Germany’s traditional industrial region colloquially called Ruhrpott (coincidentally one of this year’s European Capitals of Culture, RUHR.2010). If there are positive stereotypes associated with the Pott’s inhabitants, it’s that they’re hard-working, frank and passionate (particularly towards their football clubs). Not so coincidentally, these adjectives also apply to Too Strong the rap group. They are passionate about hip-hop, rap in a frank manner and work hard on their legacy. In rap terms, they sum it up as follows: “Kein Bling; kein Pimp, der es im Pott zu etwas bringt” (“No bling; no pimp has ever made it in the Pott”).

To the uninitiated, Pure Doze and AtomOne might actually feed into certain preconceptions people have about the German language. If all you know about German music of today is rock outfit Rammstein (15M records sold), Too Strong will not sound completely unfamiliar. While never shouted and always flowing, their raps are often delivered in a merciless tone and with full force. Even the hardest American rappers usually have a hint of soul or funk in their voices (as do many German MC’s). Too Strong’s are bare and bleak and their idea of toning it down is to whisper like conspiracists.

The Dortmund duo compensates this with a fairly wide range of musical influences. “Don’t Stop the Rock” is varied, hard-hitting, modern electro funk with Doze’s electro pseudonym Rough Dee on the mic. “Musik” (“Music”) covers a song by contemporary German reggae artist Nosliw, while “Polizisten” (“Policemen”) revises a New German Wave staple with the help of one of the original artists, both songs being well outside the group’s box. Two decades of experience (including a major label stint) have turned Too Strong into a crew with a clear vision that keeps finding new ways of getting its message across. The opener “Manchmal Kommen Sie Wieder” (“Sometimes They Come Back”) is a 4-minute narration consisting of countless sound bites arranged like one long verse over an opaque but still funky-fresh beat (picture a sinister Erick Sermon production). It’s innovative and tedious at the same time, giving newcomers a taste of the level of obsession at work here.

There are some things about Too Strong that will never change. They already started out with a nostalgic look back, and 15 years later they are still liable to name-check the old school at any moment, such as on “Bring the Beat Back” (‘Beat Street,’ Dondi, Cold Crush, etc.), which, along with the title track and the opener, makes it abundantly clear where Too Strong are coming from, even to those who don’t speak German. They portray hip-hop as ‘rebel music’ and its practitioners as community-minded outlaws armed with microphones and spray cans.

One of the best rhymes on the album states, “Diese Kultur ist eine Verneinung von Krieg / diese Kultur fÃ¼hrt nur durch reimen zum Sieg” (“This culture is a negation of war / in this culture only rhyming leads to victory”). In Too Strong’s understanding of hip-hop, “positivity comes with a .45,” to use a KRS-One analogy. Meaning they regularly resort to martial imagery, and the outcome usually isn’t as overwhelming as that new Sade song “Soldier of Love.” Too Strong’s “Soldier” for instance lacks in the drums department (usually a strong suit) and the omnipresent keys border on cheesy. While some of the other militant tracks like “Wir Machen Alles Kaputt” (“We Destroy Everything”) and “Pulverfass” (“Powder Keg”) are monotonous exercises in hard-bodied hip-hop. Not to mention that the latter irritates with its “Ba-wit-da-ba-da-bang…” hook when Kid Rock already claimed Lovebug Starski’s stylings for the rap rock genre with “Bawitdaba.”

Rock guitars are a prominent feature on “Rap Music Is Life Music.” Doze and Atom demonstrate they can effectively bring the noise on the title track, a plodding offering accentuated by a rhythm guitar that finds it completion in a meditative, moody chorus and ends in a scratched finale that cuts up the Channel Live quote “Hip-Hop’s been runnin’ through my veins ever since / so it wasn’t hard for me to grab the mic and represent.” “Bring the Beat Back” is an anthemic, obviously Public Enemy-sampling shot of adrenaline that should satisfy both the headnodder and the headbanger. “Too Strong” unpacks sentimental hair metal guitars, which seems the wrong setting for claiming to make classics for the heads who lost their faith in hip-hop. “Heartcore” could do the trick, a breakbeat- and electro-infused banger that shows them competent to rock faster tempos.

Like all rappers with an extended career, Too Strong continually have to re-introduce themselves to a new generation of listeners. They do at the same time have a loyal fanbase dating all the way back to the days when they proclaimed the infamous Silo Nation in reaction to the overly dogmatic German chapter of the Zulu Nation. “Rap Music Is Life Music” succeeds in addressing both, the former musically and the latter lyrically. ‘Preaching hip-hop,’ “Friends” is a dedication to their hardcore followers (Whodini-inspired hook included). Numerous other tracks, among them the supreme “Sturm Im Pott” (“Storm in the Pott”), should appeal to a younger demographic used to epic and dramatic moods that also reflect in the lyrics.

To analyze to which degree European rap and hip-hop reproduce US templates would go beyond the scope of this review. Even though there is something inherently original about Too Strong, there are undeniable congruencies. Some things on this album may be new for TS (heavy amount of guitars and singing), but they’re not new for Germany or rap music in general. These may be 80 minutes of ‘soul music’ from ‘two dark souls,’ but sudden success cannot be ruled out (although releasing a single – “Schrei!” – that in more than one way recalls the breakout hit of insanely successful teen rock band Tokio Hotel seems ill advised). Domestically, one can only hope that the tracks streamlined to mainstream German rap (or even pop, it’s hard to differentiate these days) don’t alienate too many of their old fans. Internationally, “Rap Music Is Life Music” is an option if you’re interested in how two European vets put it down and if you can get down to both ’80s and ’00s hip-hop.

Personally, I rate Too Strong as an interesting act, not only because I’m of the same generation and can relate to their ‘Hip-Hop is a part of our life’ experience, but because over the years I also often found myself disagreeing with their approach. That aside, it’s good to see them survive in a game they call a ‘snake pit’ and a ‘monkey cage.’ Underlining their investment into “Rap Music Is Life Music” with a remix album and announcing to tour with a full band (knowing that rap music is live music as well), Doze and Atom make a good case that rap music is indeed life music.