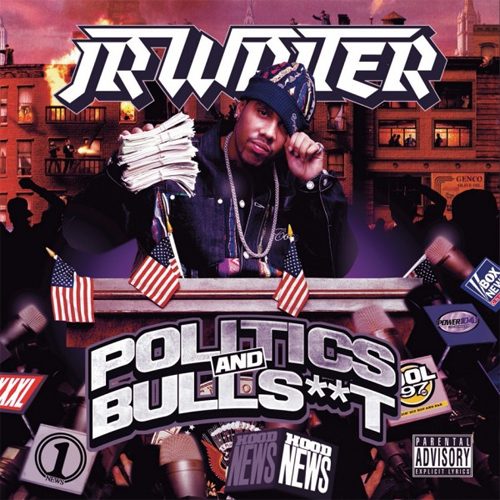 “Politics and Bullshit” is the umpteenth album by Dipset member JR Writer, coming just seven months after “Writer’s Block 5.” In fact, by the time you are done reading this review, Writer will probably have a new mixtape out. Like the rest of the Diplomats crew, Writer is nothing if not prolific. Like most of the Dipset, Writer makes it clear that he is a crack dealer first and rapper second. “Welcome back to greatness, people,” he declares on the intro. “Now, whether you copped this CD from a bootlegger, or just straight up downloaded it or what, don’t make a difference; it’s still crack. Turn it up!”

He doesn’t clarify if it is crack because it is a smokeable form of cocaine, it is highly addictive, or because he is selling it on the street corners for five bucks a rock.

Writer has earned a rep as one of the most lyrical Diplomats, but I’m not quite sure where that reputation comes from. Certainly not from opening track “It’s Like A Jungle,” which features some of the better rapping on the disc:

“I’m switching gears like I’m at a fashion show
Platinum glow
And oh, I just thought you had to know
I do the double tennis thing
You can call me McEnroe
I’m a mack fo’ sho’
Diplomatic pro
Cruising to some crack I wrote
‘Scuse me, I ain’t average, ho
I hit the ave with a ton of snow
Come get a pack and go
How I get the blow out
You would swear I had a ‘fro
Heard what I said?
You would swear I had a ‘fro”

Yes, he repeats his punchline just in case you didn’t get it the first time around. Later in the album he declares “they look like shit/I look like the shit,” and he repeatedly pulls the trick of rhyming the same word over and over. Is this what passes for lyricism these days? Still, I have to give him credit for the amount of cockiness he possesses. He has more confidence and swagger than a CEO who just got an eight-figure severance package for driving his corporation into bankruptcy. He has so much swagger that he doesn’t even bother having the rest of the Dipset on the record: Fred Money is the only other rapper featured on the disc.

The production is what you have come to expect from the Dipset: slick, dramatic, mid-tempo tracks heavy on the hi-hats and synths. For the most part it is serviceable but unspectacular, but there are a few high points: the Trakdealerz “Serious B.I.,” Dame Grease’s “Let It Rain,” and Soul Professa’s “We Ride Or Die” all mine old soul records for their hooks; and Heatmakerz’ “Come With Me” offers the fiercest beat on the album, which is matched by Writer’s fiercest rhymes. There are also some unusual samples, including Spectacular’s hip hop reworking of Billie Joel’s “Uptown Girl” which is as awesome as it is ridiculous, and “Hate On Me,” which sees Mec-One sampling the Who’s “Love Reign O’er Me,”

Writer also lifts the hook from the classic track “The Message” on “It’s Like a Jungle”: “It’s like a jungle, sometimes I wonder how I keep from going under.” Only Writer doesn’t wonder how he keeps from going under. He makes it abundantly clear in his rhymes that he is living the good life, riding in fast cars and making stacks of dough through the one-two punch of his music and his drug dealing. And like the rest of the Dipset dealers-turned-rappers, there is no remorse in his lyrics, and not even that much danger. Beyond a few references to gunplay, Writer makes dealing crack seem as risk-free and harmless as erecting solar panels or selling B2B software solutions. The violence, desperation, and ruined lives that surround the drug trade are nowhere to be found in Writers’ songs, which is disappointing given how devastating crack has been to African American communities. With a title like “Politics and Bullshit” I was hoping for some politics, if only some shoutouts to Obama. Instead, there are no politics, and a whole lot of bullshit.