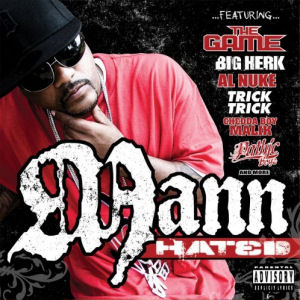 “Hated” is the third album from Detroit rapper Mann, AKA Metro AKA Macidsadour. If the title of the album doesn’t give you enough of an idea where Mann is coming from, the CD insert will. He thanks “all the hating ass niggas and bitches that made my verbal tattoo (hated) true to life,” and adds, “the ‘N’ word was used on this CD 53 times before it was buried (07/09/2007), and 117 after…real niggas don’t die!”

He’s not on some self-pitying trip, though. What separates Mann from the legions of similar street rappers is his sense of humor. “Hated” is interspersed with six “Foolish Skits” where Foolish talks shit. His funniest bit is a skit about his three degrees in getting drunk, a bachelor’s in Grey Goose, a cognac degree, and the 151 tequila degree, “when you talk to that ugly bitch in the middle of the dance floor and tongue kiss her and kiss her on the back of the neck and fuck your whole life up at child support by an ugly bitch that look like Danny Glover.” I hope he isn’t speaking from experience.

Mann has been rapping since he was 13, and his experience shows. He has an effortless flow, making his rhymes sound natural and unforced. There’s a casual confidence in his rhymes and his persona that makes him a force to be reckoned with. He holds his own with the featured rappers on the disc, including The Game, Big Herk, Al Nuke, Trick Trick, Chedda Boy, Malik, and the Pathic Boys.

Lyrically, he treads standard street rap topics like haters, scheming women, and keeping it hood with enough finesse to make the tired subject matter sound fresh. He only trips up on “Fucked Up” and “I’m the Shit” which ride their hooks into the ground.

Production is handled by the Track Slammers, Ghetti, J.D., Helluva, Kapp, Jon Boy, the Bravo Brothers, and Marco Polo, who also did the final mix. The music ranges from the icy synths of “Hated” to the Bay Area funk of “Ask About Me” to the Southern stomp of “Ride With Me.” The production is solid and polished, although there isn’t much that stands out.

Is “Hated” an instant classic or a 15 dollar coaster? Well, that’s a matter of taste. Fans of street rap will want to pick this up. Mann may not do anything mind-blowing with the genre, but he does it better than most. If synth beats and songs about getting drunk in the club aren’t your thing, Mann isn’t going to change your mind, but he’d probably appreciate the fact that you’re a hater. It’ll just inspire him to make more music.