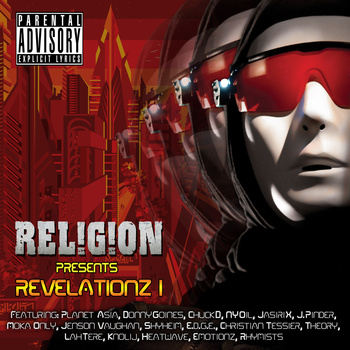 The doors of the church are now open! Canadian producer, Rel!g!on grew up in Ottawa listening to his father sing badly, according to the press release. His dad also played the organ, which seemed to fascinate the young child. He formed a group called Ardvark, but the group soon fell apart because none of the members knew how to play their instrument. By the time Rel!g!on hit high school, he was making beats and writing diss songs about his classmates, even playing them over the loud speaker on the school’s radio station. Tiring of the diss songs and “cheap” sound, an idiotic insurance scam somehow left Rel!g!on and his producing partner with a professional ASR-10. Now based in Vancouver, BC, Rel!g!on works closely with Staten Island emcee Ny Oil (also known as Kool Kim of the UMC’s), Moka Only, Jasiri X and e.d.g.e.. Those artists and many others are featured on “Revelationz I”, including the likes of Planet Asia, Donny Goines, Shyheim and Chuck D.

Service opens with a quick intro from Planet Asia which leads into “Pyramids”. The track is made up of various drums, bells, tambourines, vocal samples and an instrument that sounds like a bagpipe. On paper, it seems like this would be overkill, but it actually blends together nicely and doesn’t drown out the emcees on the song. Planet Asia and Jasari X both deliver exceptional verses. Jasari also spits two excellent verses on the following track, “Matador”, as he asks “if y’all ain’t got a message, what is you yappin’ for?” He continues his attack on sheepish trend followers, imaginary thugs and weak so-called emcees as he raps:

“More non-violent than the Quakers, Martin Luther Kings
If you hit ’em with a rock, they won’t start shooting a thing
They will murder you in print, they too dumb to write in cursive
And if you call for war, they will become a deserter
All beef like burgers, but when you take a bite
You find out they’re a chicken sandwich, mayo on white
All hype, all right, ’cause you live a false life
And since they never take a swing, they get out on called strikes
But you hard right? You got that hard white
Skinny jeans, lookin’ like Captain Picard’s tights
Big glasses on, now you a hipster
Your gay style has got you dressing like your sister”

“Whatever It Is” and “Turn Me Up” don’t really appeal to me that much. The former features Christian Tessier on some “baby, tell me how you like it” R&B smoothed out shit that I wasn’t in the mood for. To be fair, I tried to listen to the song several times but my mind kept drifting away. “Turn Me Up” features Jenson Vaughn and Theory, and it comes off as rather annoying. Vaughn dominates most of the track, while Theory spits adlibs in the background mostly. The short Theory verse at the end isn’t enough to save the song. Luckily, Donny Goines comes to the rescue with the stellar “Call My Name”. Rel!g!on’s production here combines some fast strings with slow soul claps and crafts the perfect environment for Goines to explain just why he’s the “best of the best”, as he raps:

“It’s no confusion, I’m the fusion of pain and music
Embody metaphors, similes, I’m the missing blueprint
You niggas foolish, just listen close to what I’m spewin’
Get in tune with every note, sentence I mentioned and concluded
I am tomorrow’s today, your style was borrowed from Jay
But I’m original, I followed my way
While you rappers on that yellow brick, just hangin’ from a fella’s dick
Tellin me you nice on the microphone, but bear no hits
So fuck the SoundScanin’ and how you pound cannons
You’re a clown dancin’, someone your pal’s ampin’
You take him serious, you want the truth? Here he is
Donny Goines, live in the flesh, that’s why they feel me, bitch!”

Jasari X questions the “State of the Black World”, painting a scene that compares the street life to a maze that would probably cause MLK and Malcolm to “spin in their graves”. The Moka Only and e.d.g.e. joint, “Lucid”, is a nice track but it ends just a bit too short for my tastes. Coming in at under three minutes, I think they could’ve added one more verse to the mix. “Evening News” starts off with a vocal sample that sounds like it could’ve been lifted from an old 60’s record. The song itself goes into the deceptions of mainstream media. Shyheim and Ny Oil team up on “All I’ll Ever Be”, and Shy makes it known that his past is to be left in the past as he raps:

“This is for the record, Mr. Executive
If you listen to my rap, you’ll hear some special shit
No, I won’t make music like nobody else
Even if my CD collects dust on the shelf
I can take criticism, if you wanna be a critic
But I am an artist, so let me be artistic
Open up your eyes a little, try to see my vision
Don’t wanna sign? That’s cool, I respect your decision
But tell the media don’t ask me nothin’ about prison
‘Cause that’s an environment I didn’t enjoy livin’ in
Yes I’m off parole, and I’m now a free citizen
Done with the drugs and guns, it’s all legitimate
Own my own company, B.U. Incorporated
Orchestrated to make it, I wanna be famous
Not if it’ll cost me my soul and dignity
I’m proud to be Black, if that’s all that I’ll ever be”

As a lifelong Cleveland Browns fan, it pains me to say it, but “Steelers” is one of the album’s standout tracks. It’s a narrative of the streets of Pittsburgh, the city that “gives birth to thieves, and the biggest gangsters are under dirt and leaves”. The bass is deep and is combined with some high-pitched synths and cymbals to create a nice head-nod inducing track. Things come to a close with “Are You” and “Soldier”, the latter features Ny Oil and Public Enemy front man Chuck D. The legend kicks a couple short verses to show that he hasn’t lost his touch and even sends an RIP out to Sean Bell.

Going into the service, I didn’t know what to expect from this album. Before pressing play, I was just hoping that I wouldn’t have to keep going back and forth between the album and The Good Book to understand everything. Much to my relief, I did not have to and what I was left with turned out to be a decent compilation of music. Save for the out-of-position love songs, I’d have no problem listening to the album all the way through. It was nice to hear from vets like Shyheim and Chuck D, but most of the album’s highlights come from Donny Goines, Planet Asia and Jasiri X. Rel!g!on has a nice sound to his production, and it shouldn’t be too much longer before his congregation of followers grows.