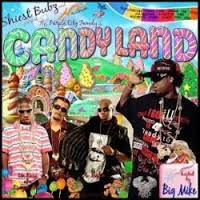 Purple City, the most loved and most hated clique in rap, is back with another outlandish mixtape. This time around instead of focusing on purple the crew has turned their attention to sweets and children’s board games. Despite the outrageous cover art, “Candy Land” has very little to do with the game or candy outside of the use of the “Candy Man” song on the intro and outro. The cuts on the mixtape focus on the usual fare from the Harlem regime, producing a few gems, but for the most part maintaining a consistency that only true fans will appreciate.

The only big gripe anyone could have with the “Candy Land” mixtape is that fact that some of the inclusions are extremely random. While the bulk of the 27 tracks feature immediate Purple City Family members and affiliates, three tracks sorely stand out both in style and in author. Though I’m a personal fan of both Yo Gotti and Royce Da 5’9”, their collaboration on “Lookin Like That” is sorely out of place in a collection of NYC street tracks, especially considering the focus on the Purple City Crew. Gov. Brown and Lil’ Kim’s contributions on “Bounce” and “Put Ya Lighters Up (Remix)” are more in tune with this compilation regionally, but their hyped up party nature also fail to blend well with the slower more threatening tracks that surround them.

Out of the tracks that remain, the Purple City Crew maintains their usual level lyrically coming through with average performances on various tracks. Absent it seems is any abundance of Agallah’s soulful production, which would have given this a mix a small boost. The mixtape’s best track is a hypnotizing club track by Un Kasa entitled “Krayon Man Rockstar.” The topic matter may be confusing to those not familiar with Purple City’s obsession with colors, but the rock-influenced beat and catchy hook/verses are sure to make this a popular track in the future. Shiest Bubz follows this effort up with “Trap Nigga,” a dirty south track featuring a screwed up hook and synth heavy production reminiscent of the current Atlanta street music. Other tracks worth noting include an interesting collaboration between J.R. Writer and Ray Cash and a contribution by Jha Jha where she shows she can avoid being completely annoying at least part of the time. Purple City’s newest member, A-Mafia, contributes a few tracks that show the young gun has a lot of developing to do before he can even compete stylistically with most emcees out today. Always enterprising businessmen, the crew also includes a track from the recent “Paris to Purple City” release.

“Candy Land” is far from the best mixtape release out right now. It’s definitely geared towards hardcore followers of the Purple City movement. The inclusion of popular tracks not by the Purple City Family may have been an attempt to bring in non-fans, but instead sound out of place. Those tracks contributed by Purple City rappers tend to be average at best and will do nothing to win anyone over. Even as a Purple City fan I would only recommend the tape for one or two tracks, otherwise I would recommend waiting for the next Purple City release (which should come sooner than later) to see if Purple City brings a more potent piff to the table next time around.