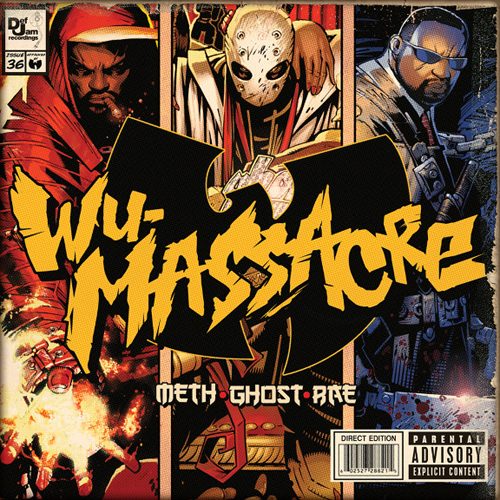 I doubt I’m the only person who feels like this project was announced just last week (last September, in reality), nor the only one who’s surprised the album is even coming out. Raekwon’s “Only Built 4 Cuban Linx… Pt. II” took roughly five years and forty-two fake track lists to finally hit shelves last year, and the Clan have never been prolific with their crew releases (six years in between “Iron Flag” and “8 Diagrams”). So when songs started to leak and ridiculously dope artwork was revealed, it seemed almost too good to be true. And unfortunately the haste to produce and release the album shows when listening; the thing is clearly rushed and even feels a tad opportunistic after the surprise critical resurgence of the Wu after the Raekwon-directed “Only Built 4 Cuban Linx… Pt. II.” “New Wu,” the trio’s sole collaboration on that record, has more vigor than anything on “Wu-Massacre.”

That being said, a collection of talent like Ghostface Killah, Method Man and Raekwon has a fairly high floor effect when it comes to making music. Lukewarm Wu is better than The Best of Ace Hood by a fair margin. I suppose an argument could be made for GZA over Chef, but this trio is Wu-Tang’s best contemporary rappers, so there’s a much higher batting average when these guys are rapping than on group albums, where U-God’s sub-Mendoza Line spitting threatens to retard any track.

And when Ghost, Rae and Meth get inspired, everything is good. “Meth vs. Chef 2” finds the pair sparring in a sequel to the “Tical” classic, and the original’s aggressiveness is felt. Whereas Part 1 utilized a grimy, lo-fi beat to invoke a grimy tone, Meth and Rae trade stanzas over Mathematics’ anxious horns. Meth probably gets the best of Raekwon as on the first, but the best line is Chef’s “not from Chicago, my gun named Margot.” Compare with the album’s opener “Criminology 2.5,” a more-or-less pointless sequel that finds Ghost and Meth spitting wearily over an inferior reinvention of RZA’s beat. These guys should not be making music this boringly self-derivative for at least five more years.

The biggest problem with the record overall is the uneven production. Raekwon gathered a jaw-dropping roster of producers for his recent masterpiece, while the trio taps… Ty Fyffe, Emile, Scram Jones and Mathematics. Scram Jones’ Bambaataa-referencing “It’s That Wu Shit” sounds like something from the “8 Diagrams” cutting room floor, and “Dangerous” is simply too insipid for these guys. Save it for Cappadonna, Math. RZA’s sole contribution promisingly samples Michael Jackson, but is ultimately too delicate for this album. What’s more, the best tracks (“Meth vs. Chef 2,” “Miranda,” “Pimpin’ Chipp”) are all three minutes or less. The latter two tracks are both classic Wu-Tang fare. On “Miranda,” each MC spits a verse about the same Mexican prostitute, and Mathematics’ repetitive piano and vocal loop matches the subject matter’s circularity. “Pimpin’ Chipp” is the sole occasion Ghostface is really given room to fly his freak flag, rhyming from the perspective of a prostitute with a bold lack of homophobic insecurity. There’s little debate at this point that he’s the premiere raconteur of the last decade, he’s able to transcend the conceptual weirdness, climaxing with a sincere exclamation of faux-female empowerment. Funny stuff.

Guest verses range from Inspectah Deck’s solid contribution to “Gunshowers” to Streetlife’s worthless sixteen on “Smooth Sailing Remix” that makes working every Wu-Tang member’s name into his rhymes GZA-style (cf. “Labels”) an even duller exercise than you’d think. Mostly it’s just frustrating because the whole tape probably only has like six or seven verses from each of the headliners. It’s cute the way Sheek mistakes Atlanta for a state on “Youngstown Heist,” but I’d much rather hear a robbery story told by Ghost, Method and Rae than Trife, Sheek and Bully. “Wu-Massacre” is ultimately a frustrating album, but adequate for multiple listens before these guys focus and produce something more substantial, which they surely will.