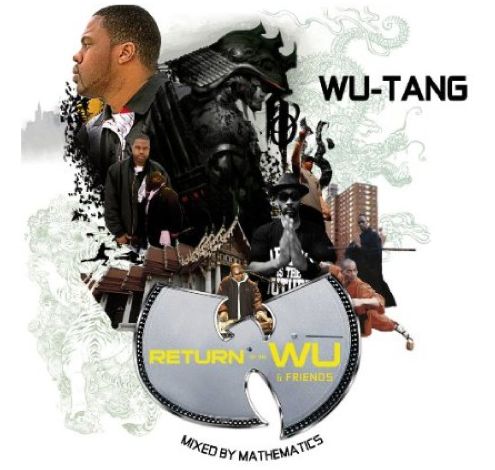 Wu-Tang :: Return of the Wu & Friends

The Wu-Tang Clan has been revamping for a while now. While some of their changes have been perceived as a huge step backwardsothers have been recognized as a much needed evolution in the Wu-Tang sound and style. It’s a very delicate balancing act for the Wu crew given their worldwide fanbase developed in the early and mid-1990’s, and many of those die-hard fans would still prefer every song had RZA’s rugged production and a slew of martial arts movie samples. With respect to those hardcore fans, many should realize the Wu’s record sales and ability to tour successfully would shrink year by year if they didn’t keep up with their contemporaries musically and lyrically, and the continued success of solo releases by Clan members reflects their ability to adapt to modern times.

“Return of the Wu & Friends” can thus be considered a curious release becauseTECHNICALLY speaking it’s nothing new. After carefully breaking down the album and scrutinizing the press release that came with this CD, it’s clear that Wu family member Mathematics has COMPILED a new Wu album as opposed to the Clan recording all new material. A few tracks are correctly defined as “exclusive” for this release, but a 90%+ majority of what’s here is material the Clan recorded between 2000 and 2008. What does this mean for the listener/consumer? It means some of the tracks here were intended for “The W,” “Iron Flag” or “8 Diagrams” but ultimately got left on the cutting room floor. Others purport to be updated versions of tracks you already know like “Clap 2010,” and if you look them up you’ll notice the verses Rae and Ghost drop are exactly the same:

Ghostface: “Porcelain floors with a dog named Ginger
Bottle cap niggaz that rhyme, we the winners
Then slide through your hood in hoods
Me, Cliff, Patrick, Gary Grice and my man C. Woods
Holdin up gorilla, two niggaz gotta hold that shit
One shot and ya mans on it
The little kids watch from down the block
Jury box, murder hop, six stash botch, fit hit the ran spots
Spit at the statue with cash and throw dough at it
Fuck bitches raw, why? Cause I’m a pro at it
Big birds danglin, cameras snatch, flash and pop from every angle and
2000 Mark Damon’in”

“Exclusive” tracks that do appear here aren’t exactly exclusive either. Long-time rap fans may have suspected the Big Daddy Kane samples just from the title of “Steppin 2 Me,” but that doesn’t make the mix any less soulful or welcome. The aforementioned Gary Grice better known to the rap world as GZA opens up the song with his trademark intellectual New York flow and crispy lyrical diction:

“Come, and get some, you want none
Y’all niggaz wanna bring it? Get done
Flashback ’88 ragtop Volvos
One caught solo, slashed for logos
200 hundred hyenas run the arena
Schemin on the truck Chevy, quick to rush every
criminal men-tal’, satanic pen pal
Wild Style on your whack beat, ten thou’
Most notable, hip-hop quotable, see many when
only one got a show to do
Floor soakin wet with the drinks and dance sweat
Tell me which clique got the deadliest handset?
I make the mic pump, force make the beats stomp
Murderous beats move like rope for you to jump
And the two inch, heightened with the Wu wrench
Non-qualifyin-ass niggaz get John Benched”

The beat and the rap is great so there’s no problem with the flows from GZA, Inspectah Deck and Masta Killa. Observant Wu fans will hear that lineup and the raps though and immediately recognize it as the “Breaker, Breaker (Remix).” Once again it’s word for word the same despite being billed as “exclusive” by the producers of this CD. Listening to “Return of the Wu & Friends” results in a dozen cases of deja vu, some that will come to you right away, others that may pop into your head a few hours later, and a few that just MIGHT genuinely be original material. Some are just plain obvious though – you don’t need an intuitive leap to realize “All Flowers” is just a new take on “Flowers” from Ghostface’s “Bulletproof Wallets” or that “John 3:16” is in fact the EXACT SAMEMethod Man song first heard on 2005’s Mathematics album “The Problem.”

The PR for “Return of the Wu & Friends” vows that this is “an album’s worth of tracks sure to fill the need for Wu bangers” and that much I am willing to concede. There’s nothing wrong with the 15 songs chosen for this per se, especially given that to some degree the material chosen is from more obscure Wu releases or remixes that haven’t gotten wide exposure. That said a dedicated hardcore Wu fan could easily compile 90% of this album out of their own collection, and given that’s the target market this album seems to be aimed at, they may have made a unfortunate mistake. What those Wu fans want is no different from what I want – original brand new Wu-Tang Clan material with all new beats and all new rhymes. Until such time as the remaining members of the group can be brought back into the studio all at once, rehash and remix comps like this are the best we’ll get.