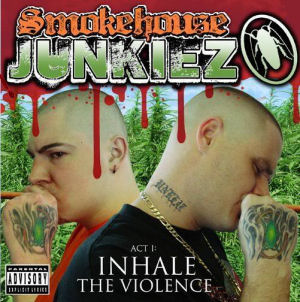 “Let me lick your clitoris and open up your pussy lips
Two fingers on the G-spot another where your booty is
I’m the kind to lubricate, K-Y Jelly and some handcuffs
Bend you over countertops and fuck you while I stand up”

So begins “Roach Dick,” just one of the many unbearably awful tracks from the explicitly sadistic, chain toking dudes that are Smokehouse Junkiez. Never heard of them? Don’t sweat it-you’ll never have any reason to. In the year and a half I’ve written for RapReviews, I’ve never had less fun listening to an album (Gutta Boyz, consider yourselves discharged). It can sometimes be exhausting to listen to and critique extremely amateurish records when you get a few duds in a row, but rarely do I consider the task sonically assaulting.

What’s more, Smokehouse Junkiez do nothing to mask their nauseating lewdness. The cover of the album: two quasi-skinheads chewing blunts, names superimposed over dripping blood, with ugly, matching roach tattoos on the back of their hands. Sensing a roach motif? Good work-Roach Click is the name of their extended family. Viewing the cover for the first time, I tried to convince myself that there was perhaps some decent horrorcore within, or at least some competent musicianship.

I was further discouraged upon flipping the case over, revealing song titles such as “Lung Butta,” “Fuctup,” “Dirty Murda Mitten Reppin’,” and, the most intriguingly baffling, “Roach Dick.” The first thing that came to mind was the marijuana equivalent of “whiskey dick,” i.e., the failure to get an erection because of excessive intoxication. Boy, was I wrong-the clichÃ© chorus chick makes it pretty clear that a roach dick is something to be envied. It’s almost tempting to believe that this is in fact an extremely dry satire of this kind of rap-the ostensibly innocuous “Love” rhymes “whiter than a dove” with “rappin to you bitches for the bloody murder glove” – but their MySpace unfortunately makes a good case for their authenticity.

So not to avoid describing the actual music in specificity any longer, the production is very cheap sounding, often just an arrangement of generic hi hats, a thumping bass and the occasional vocal sample thrown into the mix arbitrarily. Neither Junkie displays any proclivity for flow or vocal cadence, with voices that sound much more suitable for a shitty screamo band. The album’s content is restricted to drugs, violence and sex, with enough crudeness for an entire year of O’Reilly Factor polemics. While I’m no fan of Insane Clown Posse either, they’re neither as tone-deaf nor lyrically banal.