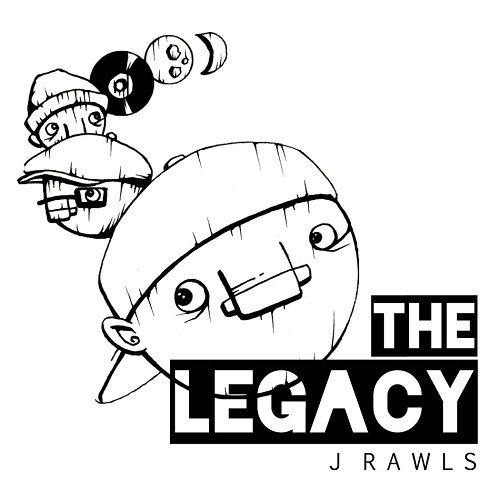 “Legacy” is a word that rappers and producers use for two reasons – either they feel they’re currently overlooked and their catalogue of past accomplishments needs greater scrutiny, or they’ve reached a point in their career where retirement looms and a “legacy” of great works is left for future generations to study and admire. I feel a personal twinge of anxiety when I tell you the latter looms larger here, because it’s hard for me to imagine hip-hop without J. Rawls. The former is certainly true to the degree that his past accomplishments deserve more praise, but at least among discerning hip-hop heads Rawls’ legacy of dopeness is well established. The press kit puts any doubt to rest – Rawls is now a man saying “I hang my hat up here and leave it to the future to equal or exceed what I accomplished.” There’s a small bit of ambiguity in that “Legacy” is listed as his final SOLO album, which leaves room for more collaborations if he so chooses, but it’s still a retirement from his days of seeking fame and fortune on his own.

Even though the aforementioned discerning heads hold J. Rawls in high regard as a producer, even the most ardent of his fans probably still sleep on him as a lyricist. “The Hip-Hop Affect” gave those fans a chance to reconsider their position, and good ol’ J.R. keeps that issue at the forefront on tracks like “My People,” where he hands off the production duties to Rashad and takes over on the microphone. It’s a slow, fat, broad and deep track that oompa-loomps it’s way to a finger snap boom bap. It’s not a “heavy” song by any means unless that’s how your finger feels after hitting the replay button multiple times. Rawls is overshadowed by nobody here, so when he opens with “I got a couple of things I gotta talk about,” he has the forum all to himself to do so:

J. Rawls throws on a “Best Producer on the Mic II” bonus track at the end of “The Legacy,” both as a sequel to a previous effort and a statement of the dopeness we’ve previously discussed. By hanging out with likes of Oddisee and Blueprint on the M-I-C, it’s abundantly clear he stands in their regard as being a dual-threat of hip-hop (and vice versa). That being said Rawls is not overly egotistical or stuck on himself, and is happy to share the spotlight throughout this “final” album with a whole slew of hip-hop all-stars. Masta Ace blesses the mic on the jazzy fresh nasty vibes of “Bills.”

J Dilla brother and protege Illa J’s presence is more than welcome on the mellow moodscape “The Rest of My Life” produced by Mighty DJ DR. In fact throughout “The Legacy” J is letting other beat maestros put in work, thoroughly enjoying the role reversal and his time in the spotlight. From the Kev Brown smoky cafe bass of “Mr. Cool” to the relaxing Rob Riley backdrop of “Pure Love,” Rawls’ flexes his muscle and sums up his production philosophy in words for a change: “Big up, Showbiz, Diamond, P.R./Primo, Tip, let me show you who we are/we dig (because) we searchin’ for once was/say we love music!” It’s hard not to when you’re listening to “The Legacy,” which is one of the more aptly titled hip-hop albums of 2014. It’s fair in closing to say that Rawls’ legacy will be for his beats, but he’s not exceeding his reach when he takes his chance to rap, and the only regret one can take away from this album is that he’s decided this is the last time he’ll do it. Maybe he’ll reconsider.