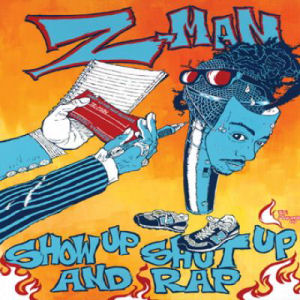 Bay Area rapper Z-Man was the highlight of 2008’s excellent “Sneak Preview” comp. At the time, I wrote that Z-Man’s label, Machete Vox, was “what hip hop should sound like.” Unfortunately, I had to wait over a year for the label to put out any new product. This 8-song free EP is Z-Man’s first project since the compilation. Typicalâ€“everyone and their mother is dropping a mixtape a week, and the guy you actually want to hear is taking his own sweet time to release anything. At least it’s worth the wait.

Beats are handled by Boac and DNAE Beats, the team behind Machete Vox. They bring their signature sound: liberal doses of 80s 808s, a dash of hyphy’s dancey energy, some Bay Area funk, and just a pinch of street rap grit. “Cupcaking” is prime Machete Vox, three minutes of banging hip hop with booming bass, clattering handclap beats, and 80s synths that sound like OMD’s “If You Leave” getting a beatdown. Z-Man does the beat justice, coming off like a 2010 model of Eazy-E as he complains about a woman who wants too much from him. “I’m tryna raise hell/and you’re tryna raise kids,” he complains.

He returns to the subject of love on “This Has Got to Be Love,” about a girl who turns him straight. He drops lines like “I stopped using heroin just for you babe/but I can’t stop using that natural toothpaste/My piss is clear I’m surprised/That my teeth are the same color as my eyes.” Like Eazy-E, Z-Man has a penchant for saying crazy shit, and like Lil Wayne, he makes it all sound good. Behind his trash talking and wild rhymes, Z-Man is a skilled rhymer and smarter than he sounds.

I expect a lot from Z-Man and Machete Vox, so I was disappointed by “I Gotta Go” and “Gurp Logo.” Neither track is terrible, but they aren’t up to the standards I hold Machete Vox to. Still, two mediocre tracks out of eight isn’t bad odds, especially for the price of free, and especially when you have a song like “Progress.” Boac lays down a simmering drumbeat while Z-Man raps:

“Show Up, Shut Up, and Rap” is further proof that Z-Man and Machete Vox are what rap needs in 2010. They beats hit hard, the rhymes are clever and funny, and they manage to mix the inventiveness of indie rap with the edge of street rap. Z-man’s full length, “Six Pack of Dynamite,” is set to drop soon. Until then you have no reason not to go download this now.