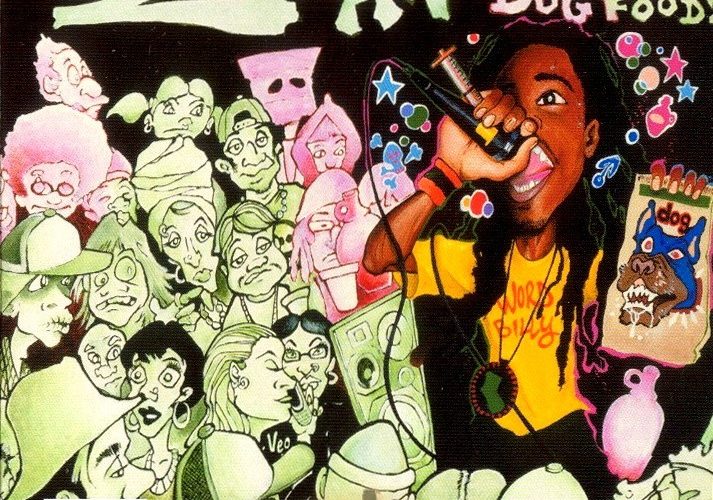 You know that friend that always tries to get you to drink with him? His suggestion to everything is: “Let’s go have a drink.” His most frequent advice is: “You’ll feel better after a drink.” Something needs to be done? “I need a drink first.” “Dope or Dog Food” is that friend. It’s almost impossible to imagine anyone spending time with this album staying completely sober. It’s an open invitation to substance abuse. Whatever your poison, Z-Man has probably found a way to mention it on this album. He even created his own slang term to (as his Semi-Official Z-Man Slang Dictionary puts it) describe ‘the next level of faded, perved, twisted’: ‘on gurp’. “My life is like a modern day song of self-destruction,” he admits in the intro, before he stumbles into the first of a series of such songs of self-destruction. A moody invitation to ‘gurp’ with him on his birthday, “Come Gurp With Me” is a fitting introduction to Z-Man’s blurred vision of the world.

“What you on, hops, dope or dog food?” the great Big Daddy Kane once quipped at his opponents. Z-Man isn’t afraid to try both. More hedonistic than Foreign Legion, as inventive with words as E-40 and all the while sounding like a wasted Motion Man, Z-Man crash-rides through his debut album as if there was no tomorrow. With a loveable but anarchistic character stuck in the turmoils of adolescence, the Frisco native has created the kind of superhero that spends 90% of his time getting high, while for the remaining 10 he’s trying to save the world from wack MC’s and the forces of evil. In the process, he’s getting acquainted with some of the lessons life has to offer. But it quickly becomes clear that our hero is only going to learn the hard way – if at all:

“Damn, them blunts got your breath smellin’ like shit
Damn, I took about a half an hour beer piss
Hopped in the Linc’, your girlfriend was drivin’
drunk-drivin’, crashed into a pole and I was flyin’
through the windshield, landed in the bushes
Woke up an hour later – still in the bushes
Crawled out the bushes, didn’t see no car
didn’t see no witnesses and walked hella far
Fractured my arm and didn’t even notice
Woke up the next day like, Oh! Oh shit!”

The songs’s aptly called “Buckle Up”, and that’s not the only car accident Z-Man is involved in during it. They say that a hard head makes a soft ass, but with no parental supervision whatsoever (he claims he had his first blunt at age 6), Z-Man runs loose seemingly immune to consequences. He may admit that he’s hungry, horny, ugly, bummy and without money in “Free Spirited”, but freedom is clearly of the highest priority to Z-Man. A freedom he’s eager to celebrate, whether punch-drunk with the Gingerbread Man (“Two Bad Ants”), or relatively clear-sighted with the Souls of Mischief’s Tajaj (“Glued”).

“Dope or Dog Food” may not be your typical Hieroglyphics Imperium release, but it is nevertheless strongly rooted in Bay Area hip-hop, and Z-Man one of the few rappers that might actually be able to bring together all of its fractions. His alter ego, the unnverving Gingerbread Man, is an update on Digital Underground’s Humpty Hump, “No Cure for Sugar” and “Party On” see him paying his respects to the late San Francisco rap pioneer (and apparently one time Z-Man neighbor) Cougnut, the latter song referencing many a Bay Area staple your average Hiero fan might not be aware of. But Z-Man is also a self-confessed vegetarian and the “most illinest b-boy from out of the Bay” who “would pray to Rakim cause he said he was god.”

Yet as important as role models are, every rapper eventually has to find his own identity. Something Z-Man has been doing publicly for a good number of years now, either as a member of the 99th Dimension crew, solo, in collaboration with folks like Sacred Hoop and Sunset Leagues, or as the Gingerbread Man. And so evolution has brought forth a snotty, impudent, hyperactive creature that prefers buddha and booze over Prozac and Ritalin to calm the fuck down. Brutally honest (“got the Hiero logo on my shit to sell records”), philosophical (“when you see God tell him that I DO exist”), cocky (“I’m a ghostwriter’s ghostwriter”) or just plain bugging (“seein’ me is like Eminem celebratin’ Mother’s Day”), Z-Man not only puts the z in zany, he’s also got more on his mind than this drunk drive of an album at first might suggest.

Still, if the Z-Man of “Dope or Dog Food” is supposed to be the final version, its creator might be advised to go back to the drawing board once more to add a few extras. While he seems like an intersting character at first, the level of intoxication in this album’s content makes that Z rarely has the sense to address other topics. Also, a lot of what he spits is just plain nonsense. His obsession with white girls is strange at best. The bounce parody “White Girls with Ass” is poorly executed, making even the more serious “Bigots and Bitches” hard to assess. The culture lyrics of the reggae-tinged “Knock on Wood” seem out of place, but at least they help you realize there’s an underlying sadness to the Z-Man’s madness. “Domain” almost manages to find a replacement for the ghetto cartoonery with more realistic depictions.

Yet nothing prepares the listener for the bitter “God Is Watching”, where Z curses the all-seeing for his seemingly passive role in this world. But it may just be the final song that is one step ahead of the rest, the insomnia-examining “Sleeping Pills”. Here, Z-Man finds the right balance between tongue-in-cheek humor and songwriting substance. Throughout his debut, Z-Man proves that observation is his forte. Too bad he doesn’t put his gift to better use. Too bad also, that a lot of the beats his producers Moss, Elon.is, Slim Goodworth and DJ Eon concoct come with reduced features. Their choice of samples in not in question and often even original, it’s the simplistic arrangements that rarely elevate the tracks beyond simple headnodder status. Still, at the end of the day, “Dope or Dog Food” offers some of that catchiness that last year’s single “Z-Mutiny” promised, as well as glimpses into the multi-dimensional mind of Z-Man, making this debut ultimately an enjoyable trip. Just not one you might want to take over and over.